Unum Therapeutics is a new immunotherapy biotechnology company in which Fidelity Biosciences, Atlas Ventures and Sanofi invested $12 MM in a Series A (first venture round) of investment.

This company has technology for re-programming T-cells, and its competitors are Adaptimmune (partnering with GlaxoSmithKline) and UPENN (partnering with Novartis), Juno Therapeutics (partnering with Memorial Sloan Kettering), and Kite Pharma (partnering with the NCI). Adaptimmune’s approach involves re-engineering of the T-cell receptor, itself, so that it binds to cancer epitopes presented on HLA molecules with higher affinity. In a small study of patients with synovial carcinoma, 4/5 patients have responded with one patient having complete disappearance of disease at 9 months.

UPENN’s approach (as well as Juno’s) involves Chimeric Antigen Receptors (CAR T-cell), comprised of consists of an intracellular T-cell receptor CD3-zeta chain signaling domain that induces T-cell activation, a costimulatory 4-1BB domain that enhances T-cell mediated responses and anti-CD19 antibody fragments that bind to CD19. So, the main difference between Adaptimmune’s approach and UPENN’s is that Adaptimmune uses the T Cell Receptor, itself, and UPENN creates a T Cell Receptor-like molecule using an antibody targeting domain for CD19, which is on the surface of B cells. In clinical studies, 90% patients with acute lymphoblastic leukemia achieved a complete response. 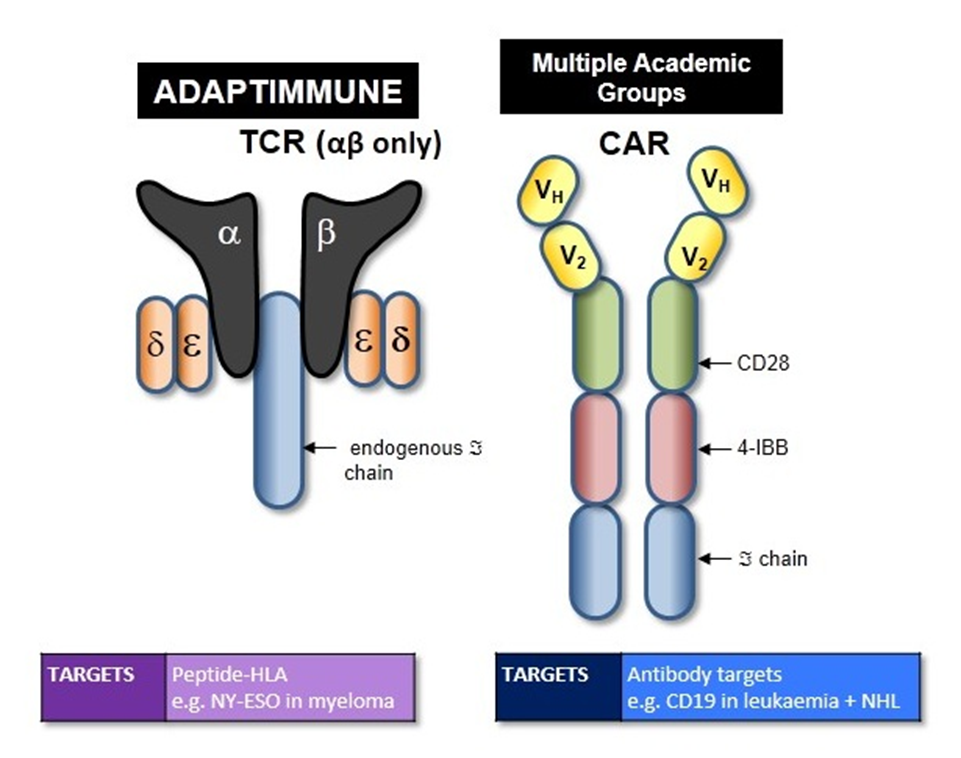 So, what does Unum hope to bring to the party that Adaptimmune, UPENN, Juno, and Kite are not? Unum’s antibody-coupled T cell receptor (ACTR) technology involves isolating a patient’s T cells and engineering them to express a chimeric receptor that includes the extracellular domain of Fc gamma receptor III (CD16; FCGR3)

Unum’s approach involves equipping tumor-specific antibodies with genetically rewired T cells, creating a targeted oncology treatment that marries the efficient, predictable delivery of antibody technology with the cancer-killing power of immunotherapy. Thanks to the versatility of antibody targeting, the resulting treatments can potentially benefit a wider variety of cancers than other T cell therapies, including CAR-Ts and TCRs, which commonly must bind to specific antigens. Furthermore, unlike the treatments under development by Novartis ($NVS), Juno Therapeutics and others, Unum’s approach promises easier titration and administration thanks to its use of well-understood antibodies, the company said.

What does that mean? Unum’s technology is called ACTR – Antibody Coupled T-cell Receptor, which

enables genetic-programming of T-cells to attack tumor cells in an antibody-directed manner.  Unum’s ACTR constructs are not restricted to a single antigen or narrow set of tumors, but instead can be universally applied to augment any antibody-directed anti-cancer therapy with a cell-surface antigen.  Hence the name, derived from e pluribus unum – “out of many, one”.

One of the problems with CAR T-cells is that the cells expand in vivo and cannot be turned-off; that is why B-cell aplasia occurs in the ALL trials. ACTR required antibody binding – in order to “turn off” the ACTR treatment, the antibody is no longer administered.

The “re-programming” of T-cells then involves equipping the T-cells with the ability to recognize the Fc portion of monoclonal antibodies, which is what happens in a an ADCC (antibody-directed cellular cytotoxicity) response. Natural Killer (NK) cells, monocytes, macrophages, neutrophils, eosinophils and dendritic cells bind to CD16 (Fcg Receptor III) on antibodies and induce lysis via a non-phagocytotic process. Cytotoxic T Cells, on the other hand, attack target cells that express epitopes in the context of MHC Class I by binding to HLA antigens.

So, Unum’s approach is to enable Cytotoxic T-cells to participate in ADCC, that is, remove their requirement to bind and kill cells strictly on the basis of MHC Class I antigen presentation.

The diagram below summarizes various mechanisms of tumor killing mediated by antibodies. Unum’s approach is not included, however, if it were to be added, Cytotoxic T-cells would appear in the upper right section of “b” – these cells would mimic NK cell activity where the antibody opsonizes the target and the Cytotoxic T-cell would bind to the antibody. 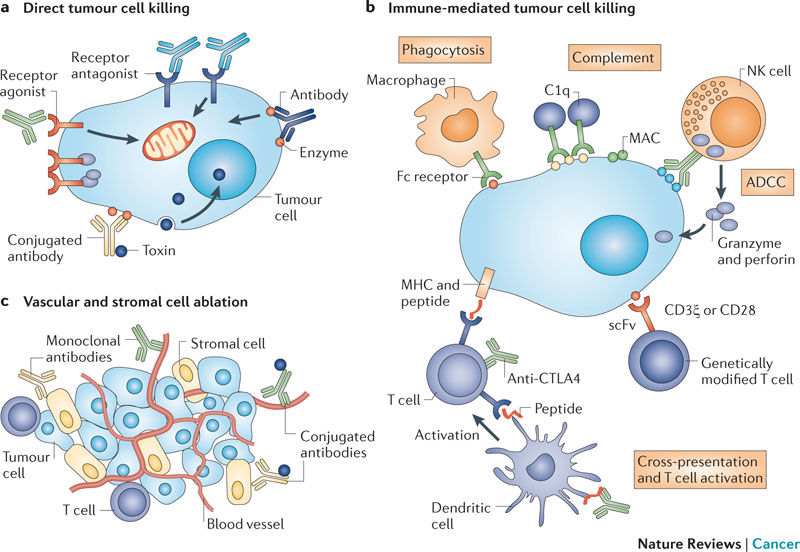 (a) Direct tumour cell killing can be elicited by receptor agonist activity, such as an antibody binding to a tumour cell surface receptor and activating it, leading to apoptosis (represented by the mitochondrion). It can also be mediated by receptor antagonist activity, such as an antibody binding to a cell surface receptor and blocking dimerization, kinase activation and downstream signalling, leading to reduced proliferation and apoptosis. An antibody binding to an enzyme can lead to neutralization, signalling abrogation and cell death, and conjugated antibodies can be used to deliver a payload (such as a drug, toxin, small interfering RNA or radioisotope) to a tumour cell. (b) Immune-mediated tumour cell killing can be carried out by the induction of phagocytosis; complement activation; antibody-dependent cellular cytotoxicity (ADCC); genetically modified T cells being targeted to the tumour by single-chain variable fragment (scFv); T cells being activated by antibody-mediated cross-presentation of antigen to dendritic cells; and inhibition of T cell inhibitory receptors, such as cytotoxic T lymphocyte-associated antigen 4 (CTLA4). (c) Vascular and stromal cell ablation can be induced by vasculature receptor antagonism or ligand trapping (not shown); stromal cell inhibition; delivery of a toxin to stromal cells; and delivery of a toxin to the vasculature. MAC, membrane attack complex; MHC, major histocompatibility complex; NK, natural killer. http://www.nature.com/nrc/journal/v12/n4/fig_tab/nrc3236_F1.html