Biotech company Syros Pharmaceuticals just raised $53.1 MM in a Series B financing after raising a $30 MM Series A financing in 2013. This is big money for a small company – and, the money comes from some very savvy biotech investment funds.

The technology comes out of two elite cancer centers – the Whitehead Institute and the Dana Farber Cancer Center. So, what does Syros have that is gaining all of this attention, and money?

When the control of gene expression becomes dysregulated, cellular identity is altered.

Syros founders’ seminal discovery of super-enhancers, a new class of gene control elements, enables us to understand the master switches used by a cell to establish and maintain its identity. Importantly, our scientists found that in disease, these master switches also control the expression of genes driving disease. These gene control elements provide a road map for understanding and controlling disease causing genes.

The company seeks to map gene regulation circuits that are important in defining the cell state and disease. The hope is to determine optimal points of intervention with therapeutics.

Through the construction of differential gene control maps, new molecular targets can be identified in much the same way that disease driving genes such as oncogenes have been identified through mutational analysis. Our platform also identifies optimal approaches to disrupt gene control machinery.  By disrupting the switches themselves, multiple disease-associated genes can be reduced with a single molecular intervention.

Support for this approach is described in a recent publication by Syros’ scientific founders. In this seminal work, scientists showed that inhibition of a gene control factor with a novel, small molecule inhibitor caused selective reduction in expression of disease causing genes in blood cancers. Importantly, Syros’ platform can identify specific patients most likely to respond to these gene control therapies.

Enhancers are distinct genomic regions (or the DNA sequences thereof) that contain binding site sequences for transcription factors (TFs) and that can upregulate (that is, enhance) the transcription of a target gene. By taking diseased tissue from patients and exposing the tissue to a variety of substances (including drugs, drug candidates from chemical libraries, natural substances, growth factors, etc.), the gene control circuits that are important in driving diseases are identified. These may shed light on biomarkers that will be useful in diagnosis, selection of optimal therapies, monitoring of therapeutic effect, and the identification of experimental drug candidates that may be useful in the treatment of cancer and other diseases. 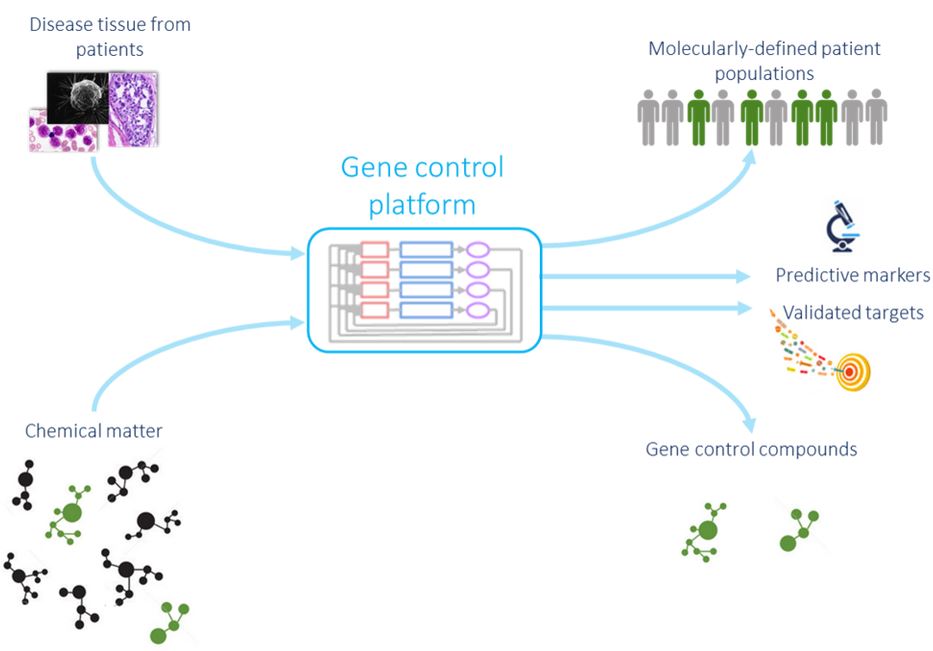 These master switch super enhancers constitute another important class of control elements that help elucidate the biology of disease.

The company is developing treatments for acute myeloid leukemia – presenting findings at last month’s American Association of Cancer Research (AACR) Hematologic Malignancies Meeting in Philadelphia. The company’s work has been published in both Cell and Nature.