The Chop protein, not to be confused with the CHOP chemotherapy regimen for lymphoma (Cyclophosphamide, Hydro doxorubicin – Adriamycin, Oncovin – vincristine, and Prednisone), is a multifunctional transcription factor. This 29 kda protein that is produced following unfolded protein stress in the endoplasmic reticulum, which then triggers apoptosis. 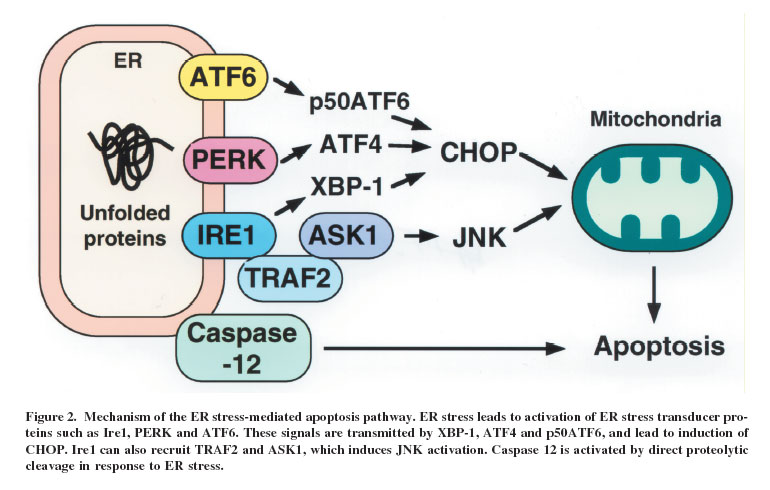 In addition to being a stress sensor, Chop (CCAAT-enhancer-binding protein homologous protein) has also been shown to enhance cytokine production in macrophages.

Research by Paulo Rodriguez and his colleagues at LSU published in September 18th issue of Immunity demonstrated that the stress sensor C/EBP-homologous protein (Chop) regulates the function of MDSCs – mesenchymal derived suppressor cells. MDSCs are involved in cancer, inflammation and infection. MDSCs not only inhibit the immune response that destroys cancer cells, but they also promote the growth of new blood vessels that feed tumors, as well as the spread of cancer by promoting EMT – epithelial-mesenchymal transition through the activation of EGF (epidermal growth factor), HGF (hepatocyte growth factor), and TGF-β pathways. 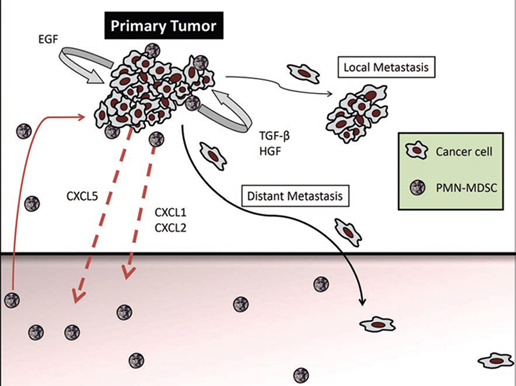 MDSC’s also suppress the immune response in cancer by expanding Treg cells (which abrogate the cytotoxic T-cell activity in the tumors) and by inhibiting the expansion of CD4 (T-helper cells). 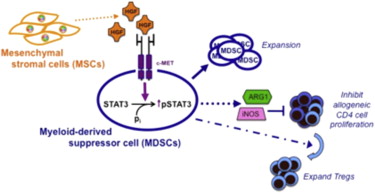 Mesenchymal stromal cells (MSCs) are multilineage progenitors with immunomodulatory properties, including expansion of immunomodulatory leukocytes such as regulatory T lymphocytes (Tregs) and tolerogenic dendritic cells. We report that human MSCs can expand CD14−CD11b+CD33+ human myeloid-derived suppressor cells (MDSCs). MSC-expanded MDSCs suppress allogeneic lymphocyte proliferation, express arginase-1 and inducible nitric oxide synthase, and increase the number of Tregs. This expansion occurs through the secretion of hepatocyte growth factor (HGF), with effects replicated by adding HGF singly and abrogated by HGF knockdown in MSCs. In wild-type mice, the liver, which secretes high levels of HGF, contains high numbers of Gr-1+CD11b+ MDSCs, and injection of HGF into mice significantly increases the number of MDSCs. Expansion of MDSCs by MSC-secreted HGF involves c-Met (its receptor) and downstream phosphorylation of STAT3, a key factor in MDSC expansion. Our data further support the strong immunomodulatory nature of MSCs and demonstrate the role of HGF, a mitogenic molecule, in the expansion of MDSCs.

The team confirmed their findings by deleting Chop and studying the effect. They found that the absence of Chop not only reduced the ability of MDSCs to inhibit T-cells and suppress immune response, but also boosted the effectiveness of treatment.

“Our data demonstrate the central role of Chop in MDSCs’ suppressive activity and suggest the feasibility of overcoming it by blocking Chop,” concludes Dr. Rodriguez.