Multi-modality (surgery, chemo, radiation) therapy and combination chemotherapy (e.g, CHOP and ABVD) have long been the mainstays of treating cancer. So, we should not be surprised to read about the discovery made by scientists at Rice University and MD Anderson regarding a two-step approach involving radiation and immunotherapy.

Now, what did surprise me was the analogy the authors made to cyberwarfare:

Recent research has found that cancer is already adept at using cyberwarfare against the immune system, and we studied the interplay between cancer and the immune system to see how we might turn the tables on cancer,” said Rice University’s Eshel Ben-Jacob, co-author of a new study this week in the Early Edition of the Proceedings of the National Academy of Sciences.

The team showed that dendritic cells use exosomes (packets of DNA, RNA, microRNA’s, and proteins sealed in vesicles) to re-program effector cells. Dendritic cells are the central link between the innate and the adaptive immune response. In unleashing an adaptive response, dendritic cells reprogram T-helper cells.

http://www.nature.com/nrg/journal/v4/n3/box/nrg1019_BX1.html Macrophages (and neutrophils) engulf and destroy microbes after first encounter and — together with natural killer (NK) cells — secrete cytokines that orchestrate innate and adaptive immunity (panel a). The dendritic cells (DCs) — specialized relatives of macrophages — present antigens to LYMPHOCYTES (white blood cells) to stimulate adaptive immunity (panel b). Innate immune recognition is based on the detection of constitutive and conserved microbial products (pathogen-associated molecular patterns, PAMPs) — including lipopolysaccharide (LPS) — through pattern recognition receptors (PRRs), including Toll-like receptors (TLRs). Binding to TLRs activates macrophages and DCs, causing them to release pro-inflammatory cytokines and chemokines and triggering functional maturation of DCs by upregulating the receptors CD80 and CD86. This leads to the initiation of antigen-specific adaptive immune responses and the functional differentiation of T cells. Innate immunity therefore acts to focus and control acquired immunity.

Well, cancer cells have co-opted the exosomal pathway to also re-program cells to assist their growth, survival, and metastases through heterotypic cellular interactions. 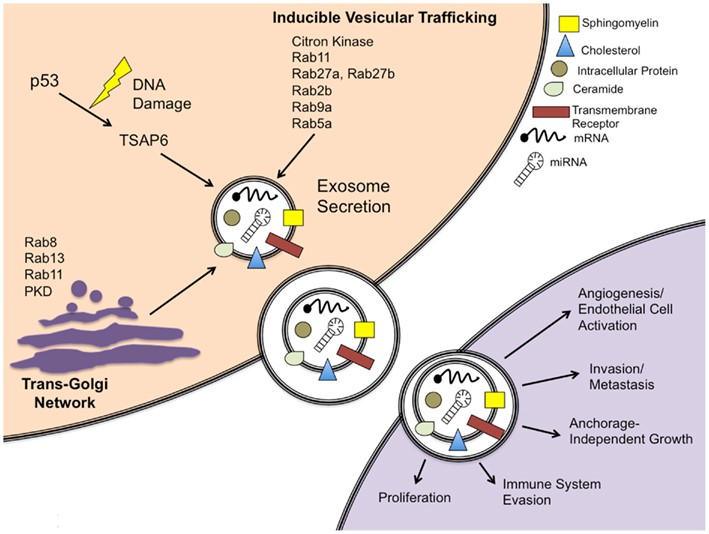 http://journal.frontiersin.org/Journal/10.3389/fonc.2012.00038/full Figure 1. Schematic of exosome secretion in a cancer cell model. Exosomes are secreted via a constitutive pathway involving the Trans-Golgi Network and/or inducible pathways, which can be activated by a p53-mediated response to DNA damage or Rab GTPases. Characteristic protein and RNA components are shown for a canonical exosome. Exosomes released from cancer cells can be taken up by neighboring cells and are capable of inducing pathways involved in cancer initiation and progression.

“This is cyberwarfare, pure and simple. Cancer uses the immune systems’ own communications network to attack not the soldiers but the generals that are coordinating the body’s defense.”

“You should imagine there is a tug-of-war between the cancer and the immune system,” said study co-author and CTBP co-director José Onuchic, Rice’s Harry C. and Olga K. Wiess Professor of Physics and Astronomy. “Sometimes one side wins and sometimes the other. The question is whether we can understand this battle enough to use radiotherapy or chemotherapy in such a way as to change the balance of the tug-of-war in favor of the immune system.”

The group postulates that there are 3 possible states of cancer:

The exciting finding is that by alternating multimodality therapy, the state of being of the cancer cell can be modulated:

Ben-Jacob said the team showed that it was possible to force cancer from the strong to the moderate state by alternating cycles of radiation or chemotherapy with immune-boosting treatments.

“Our model shows that just a few of these treatment-boosting cycles can alter the cancer-immune balance to help the immune system bring the cancer to the moderate state,” Ben-Jacob said. “Once in the intermediate state, cancer can be brought further down to the weak state by a few short pulses of immune boosting.

“It is much more effective to use a two-step process and drive cancer from the strong to the intermediate state and then from the intermediate to the weak state,” he said. “Without the exosome — the cancer-immune cyberwar nanocarriers — and the third state, this two-step approach wouldn’t be possible.”