As tumors grow and become unresponsive to external cellular signals, the level of oxygen in the masses decreases; mutated cells, those with malfunctioning p53, grow and thrive greater than 0.2 mm from the blood supply.

Radiation therapy works by killing capillaries of newly forming blood vessels and by generating high energy free radicals that damage DNA and kill cells. For radiation to be effective, oxygenation is needed.

TSC (trans sodium crocetinate) is a molecule that when injected in the blood stream, increases the oxygenation of tumors, even those in the central nervous system.

During Diffusion Pharmaceutical’s preclinical studies in rats, glioblastoma cells were surgically implanted in the brains and the rats were then divided into three groups.  In the control group (group of rats which did NOT receive any treatment) all the rats died within 29 days. In the second group, which received radiation therapy at 10 days post tumor implantation but not TSC, 28% were alive at 60 days.  In the third treatment group, which received an IV injection of TSC prior to radiation therapy, survival increased to 73%. 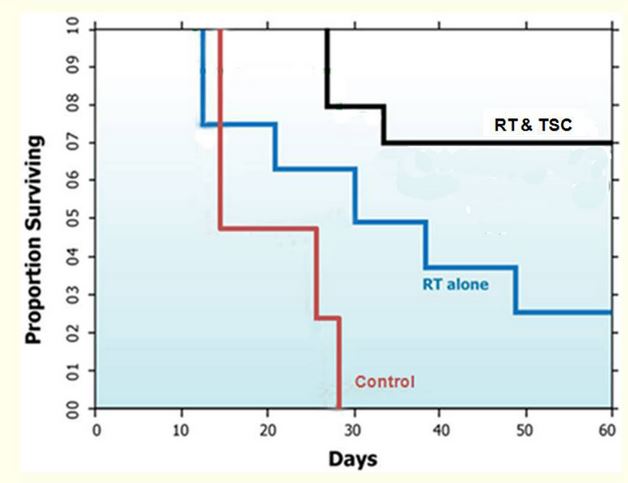 On September 4, 2014, the company raised $3.5 MM to advance the compound, which is undergoing Phase II trials at 18 major cancer centers around the country. The compound, which is being tested in conjunction with radiation therapy, has been granted orphan drug designation for newly diagnosed primary brain cancer, or glioblastomas, as well as brain metastasis.