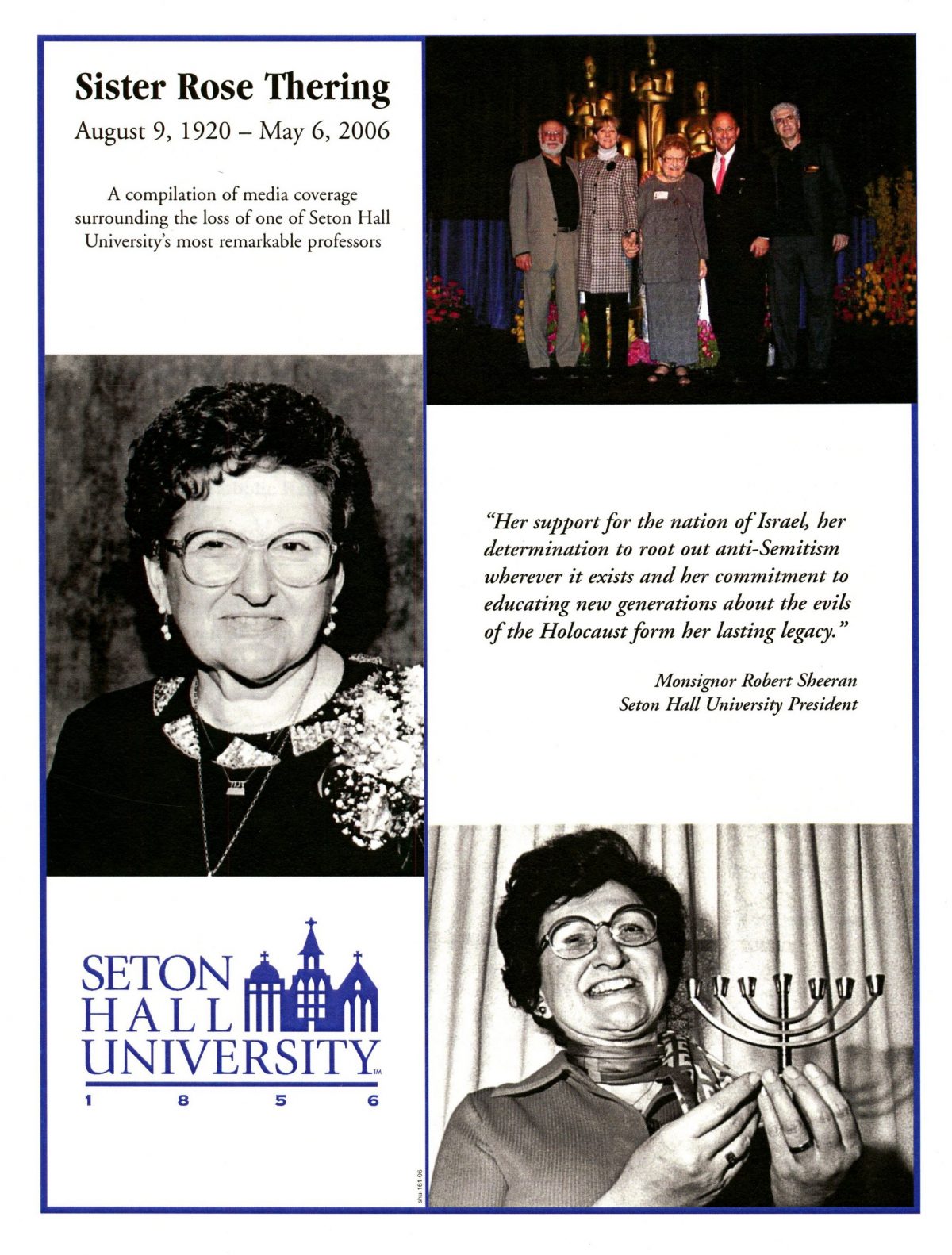 “No one who ever brushes shoulders with Sister Rose can forget the experience.  Her unique charism, blending warmth with idealism, moves everyone she meets.  She is also a team player who serves on many teams, all with the same fervent ideals.”

This passage was written to summarize the legacy of Sister Rose Thering upon the receipt of an honorary degree bestowed by Seton Hall University in 2000. These remarks show that the esteem she was shown in life was profound and remains ever strong even a decade after her death six years later.  Her life and works are diverse and continuously honored not only on the campus, but also on a global level alike. Sister Rose (as she was affectionately known) was most widely noted for her advocacy of Israel and promoting the spiritual and educational importance inherent within Christianity and Judaism.  Her respect for each religious tradition entailed a perpetual celebration of the uniqueness found within each faith and fostering respectful dialogue between both religious traditions whenever possible.  This became one of her most lasting contributions to humankind.

Rose Elizabeth Thering was born on August 9, 1920 in Plain, Wisconsin and entered the order of Racine Dominican Sisters at the age of 16.  She later earned her academic credentials that included an undergraduate degree from Dominican College (1953), master of arts from the College of St. Thomas (1957), and a doctorate from St. Louis University (1961) before embarking on her long-standing work as an educator.

The doctoral dissertation written by Sister Rose focused upon the negative treatment of Judaism found in Catholic-produced textbooks.  The findings of this study were utilized by Cardinal Augustin Bea, a German Jesuit priest who during the Second Vatican Council used the work of Sister Rose for perspective that resulted in the 1965 document: Nostra Aetate (“In Our Age”), A Declaration on the Relation of the Church with Non-Christian Religions, which came down to the following major pronouncement in regard to the Crucifixion of Christ: “. . . what happened in his passion cannot be charged against all the Jews, without distinction, then alive, nor against the Jews of today”. As regarding how this issue was to be handled in catechetical instruction, it added, “The Jews should not be presented as rejected or accursed by God.”

This adherence to Nostra Aetate in turn became a lifelong cause for Sister Rose where she advocated for Christians to understand and embrace this message of toleration and bring the principles from print to real life recognition.  Her activism resulted in fighting Anti-Semitism and becoming more involved in community initiatives where she was one of the founding forces behind the National Christian Leadership Conference Leadership Conference for Israel, United States Foreign Relations Committee, and the United Nations Educational, Scientific and Cultural Organization (UNESCO) among many others.  In addition, Sister Rose became a charter member of the New Jersey Commission on Holocaust Education where her work led to required instruction of the Holocaust and Genocide throughout all New Jersey Public School systems.  Her outreach was so widely known that a film about her activism entitled: Sister Rose’s Passion released in 2004 was later nominated for an Academy Award. 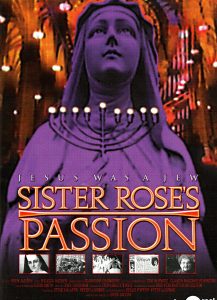 Even though she was a citizen of the world, Sister Rose made an important and lasting mark on Seton Hall when she arrived on campus in 1968 through her work as a faculty member in the College of Education.  She advanced to the rank of Professor and was elected Chair of Secondary Education before her official retirement in 1989.  Sister Rose further helped to enhance the Institute of Judaeo-Christian Studies, conducted over 50 tours of Israel and countless workshops on Judaism that helped lead to the origin of the Menorah Studies Program that led to the Graduate Department of Judaeo-Christian Studies founded in 1974.  She later became a Professor Emerita at Seton Hall and the Sister Rose Endowment Center named in her honors continues to the sponsor the annual “Evening of Roses” event where leaders in both the Jewish and Christian communities were honored for their contributions to mutual religious understanding. 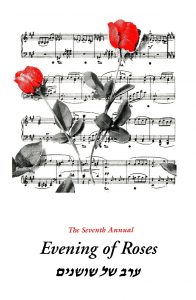 In addition to the memories and testimonials that remain, the Monsignor William Noé Field Archives & Special Collections Center houses the Sister Rose Thering Papers (MSS 0016) consisting of various works that show more detail on her life and work over the last century.  The following abstract provides an overview of this collection which is available for research consultation . . .

The Rose Thering Papers (1944-2005) consist of the professional and personal papers of Sister Rose Thering. The collection includes writings, correspondence, speeches, travel information, and subject files. Most of the material dates from Sister Rose Thering’s time in New Jersey working for the Institute for Judaeo-Christian studies, and documents her teaching and scholarly activities, her work for the state of New Jersey in creating legislation for the teaching of the Holocaust, her international activism, and her travel to gives talks to a wide variety of audiences. The materials also demonstrate the varied research interests of Sister Rose that are located in specialized subject files.

More details on this collection can be reviewed via the following link . . .

In addition, the Archives & Special Collections Center along with the University Libraries of Seton Hall contains a number of books authored by and about Sister Rose along with various articles that highlight her research and varied pronouncements . . .

For more information regarding Sister Rose Thering along with other figures related to the Judaeo-Christian Studies program and its history please feel free to contact us via e-mail at: Archives@shu.edu or by phone at: (973) 275-2378.