This diary was written by John Erigena Robinson, who graduated from Seton Hall College in 1874. His diary concerns his everyday life at the college, including worrying about assignments, writing letters to his family and friends, and playing for the college’s baseball team. The campus that Robinson studied at during the mid-1870s was one that centered on a structured, liberal arts education that was emblematic of Catholic higher education during his age. He entered into a world of study at Setonia that consisted of two sessions lasting five months apiece from September through June. 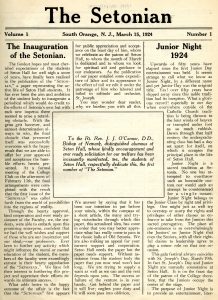 John Erigena Robinson’s academic experience at Seton Hall College was based on a structured, liberal arts education that was emblematic of Catholic higher education during his age. His course of study included courses in Latin, Greek, history, philosophy, and oratory. This course catalog for the 1872-1873 academic year shows the schedule Robinson would have followed in the second term of his junior year, which is when he begins keeping the diary.

In January 1873, Robinson’s diary shows he was very concerned about producing a good speech for the “Junior Exhibition,” an event in which the juniors of Seton Hall College showed off their oratory skills alongside musical performances. Students’ families and members of the community attended the event. Robinson spends a great deal of time practicing his speech before the Exhibition. On January 17, 1873 he writes:

“I am preparing for the Junior Exhibition as hard as I can. I was up two or three hours this evening speaking as well as I could. I have improved wonderfully. At least this is what everyone tells me. Indeed I am surprising myself. During all the time I have been in Elocution Class I have never no not once spoken a piece anyways decently. I have made up my mind time and gain to cast off my backwardness in speaking and by a grand effort to keep on improving. Notwithstanding all my resolutions it was not until I commenced to speak my oration or whatever it is termed that I have made that effort that points out a better future in the line of speaking at least.”

On the day of the exhibition (January 29, 1873) Robinson puts his nerves aside and delivers his speech with great success:

“Before I know where I am I am speaking. A line put in its wrong place makes me skip two or three pages. Unknown to anyone except those who have heard my speech three or four times. I go back. Not one word of prompting. I come to papa’s poetry as I end its first verse I am enthusiastically clapped. I come down amid great applause. I have done well. Papa and all are pleased. Hurrah!”