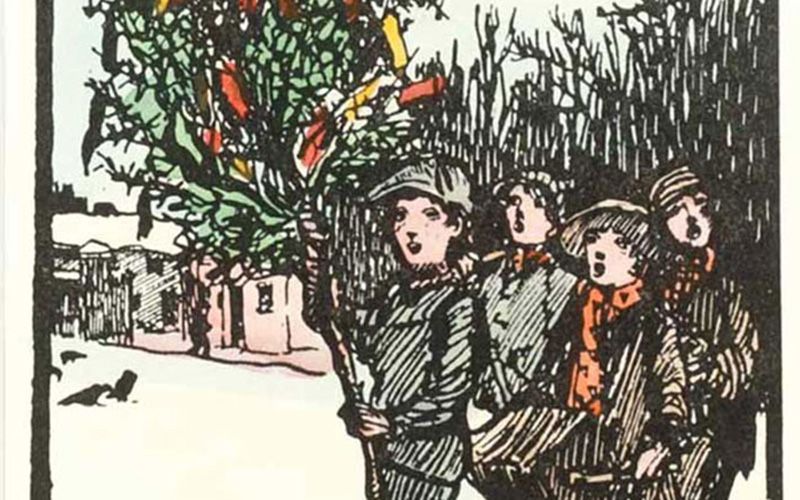 In religious terms, December 26th is the second day of Christmastide is part of the “Twelve Days of Christmas” observance between the Nativity and Epiphany.  In secular contemporary circles, the day itself is often seen as a time to rest, shop, or return gifts for exchange, but is also notable for the observance of what has come to be known as “Boxing Day” and has endured over the centuries. Various theories regarding the naming of this holiday have endured including among others servants receiving boxed gifts from their respective managers that emanated from Great Britain and is celebrated throughout the commonwealth wherein along with gifts in past days “lords of manor” and servants would trade places for that 24-hour period and in modern times the switch is based more on creative role playing in the present day.  In Éire proper, December 26th among the Christian population in particular, a different style commemoration that honors the Feast of St. Stephen has its own customs and traditions which has lived on through the ages.

St. Stephen (5-34 AD) was a church deacon who is often recognized (and memorialized in the Acts of the Apostles found throughout texts within the New Testament) as the first martyr of Christendom who lost his life in defense of his faith.  The specific reason for his death came through reprisal for negative remarks about Jewish authorities that spread to the ears of various Synagogue overseers throughout the City of Jerusalem during the fourth century.  According to existent accounts, Stephen was stoned to death for this sacrilege which led to his martyrdom and subsequent place of adoration over time.  His deed is recognized throughout various Christian denominations on a worldwide scale.  When it comes to the place of this martyr in Irish life, the famed Georgian square in Dublin, christened “St. Stephen’s Green” has immortalized him along with a Catholic parish that bears his name situated in Tyrrellspass, County Westmeath as well.

In broad terms, the traditional celebration of St. Stephen’s Day is actually a National Public Holiday (following in the wake of the Irish Banks Holiday Act of 1871) throughout the Republic of Ireland.  This observance is also celebrated in other locales (especially prevalent across Europe), but within the townlands and villages of Ireland, pubs and stores are often open to accommodate the crowds and visiting family members, attending musical-comedy performances that rely mainly on pantomime as a means of expression, and/or attending special Masses honoring Stephen for the more devout are popular traditions and more modern in approach than in past years when a Wren was the true centerpiece.

This celebration is known in the Irish language as: Lá an Dreoilín or Lá Fhéile Stiofáin which in translation is known variously as “Wren Day,” “Wren’s Day,” or “Day of the Wren,” or the “Hunt of the Wren” (pronounced “wran” in Ireland) in which this bird is short in physical stature with a small wingspan is conversely loud and bold in its actions.  Known in some circles as “The King of Birds,” the wren according to historical accounts was the betrayer of Stephen who was found after hiding from those who sought to kill him making this fowl who squealed an integral part of the story in this martyrdom.  In the present day, it is considered good fortune for the individual to capture a live wren or a least secure a feather to find abundant good fortune while this bird of death is also associated with the old year.

Tradition has it that on every December 26th, a procession of individuals (known variously as “mummers” or “strawboys” or “wrenboys”) don suits and hats of dried hay, colorfully mixed and matched old clothing with some festooned in tinsel or colored paper and wearing masks to hide their faces while playing musical instruments in Céilí style, or process and dance on their own downtown streets.  During days of yore, in-between the march, the revelers stopped at homes along the way to ask for money, food, and drink as ingredients for the parties that were celebrated on that day.

For those who did not contribute according to legend would risk having a wren buried outside of their door which would constitute twelve years of back luck for the non-donor.  In present times, those who collect money often donates these alms to charity or local schools instead of using it on themselves. Leading the way for the band of revelers within the parade itself is a pole bearer (or a few) who has a faux wren (in past ages it was a real bird, but this practice was phased out around the turn of the twentieth century) mounted atop this staff and in some cases also adorned with a holly bush to further denote the hiding place of Stephen upon his discovery.  Thu tradition is more common and celebrated fervently in different parts of Ireland including Dingle and Westmeath among others and has since fallen out of vogue in other regions of Ireland, but has undergone a more modern revival while keeping core traditions alive especially the honoring of the wren, song, dance, and expression which is now co-educational while in past days was a male only revelry. 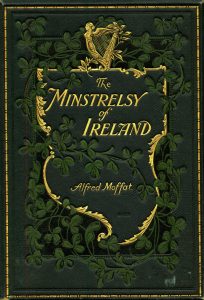 Many who have no recognition of St. Stephen, may have heard his name within the refrain of the song “Good King Wenceslas” by John Mason Neale in 1853 actually in honor of his feast day.  This ballad begins in the following manner: “Good King Wenceslas look’d out, On the Feast of Stephen; When the snow lay round about, Deep, and crisp, and even . . . Brightly shone the moon that night . . .”

This mention is also a compliment to a number of poems and songs that honor St. Stephen and the Day of the Wren including: “The Wren, The Wren” (The Wrenboys Song) published in popular music anthologies during the nineteenth centur 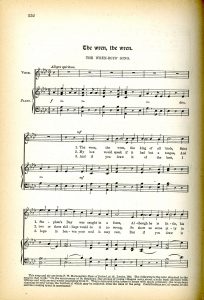 However, he most prevalent and standard of rhymes that is repeated over and over on December 26th is the following verse . . .

The Wren, the Wren the king of all birds,
St. Stephens’s day, he was caught in the furze.
Although he is little, his honour is great,
Rise up, kind sir, and give us a trate.

We followed this Wren ten miles or more
Through hedges and ditches and heaps of snow,
We up with our wattles and gave him a fall
And brought him here to show you all.

For we are the boys that came your way
To bury the Wren on Saint Stephens’s Day,
So up with the kettle and down with the pan!
Give us some help for to bury the Wren!

For more information about the story of St. Stephen can be found within New Testament text found in our Rare Book Collection including one of the oldest of our Irish-language volumes entitled: Tiomna Nuadh ar dTighearna agus ar Slanuigheora Iósa Criosd : ar na ťarrv, ng go firněać as Greigis go Gioďeilg (1681) along with other versions in later editions in multiple languages.

For more information on St. Stephen, Wren Day, and other aspects of Irish and Religious History please feel free to contact us by phone at: (973) 275-2378, or via e-mail: Archives@shu.edu 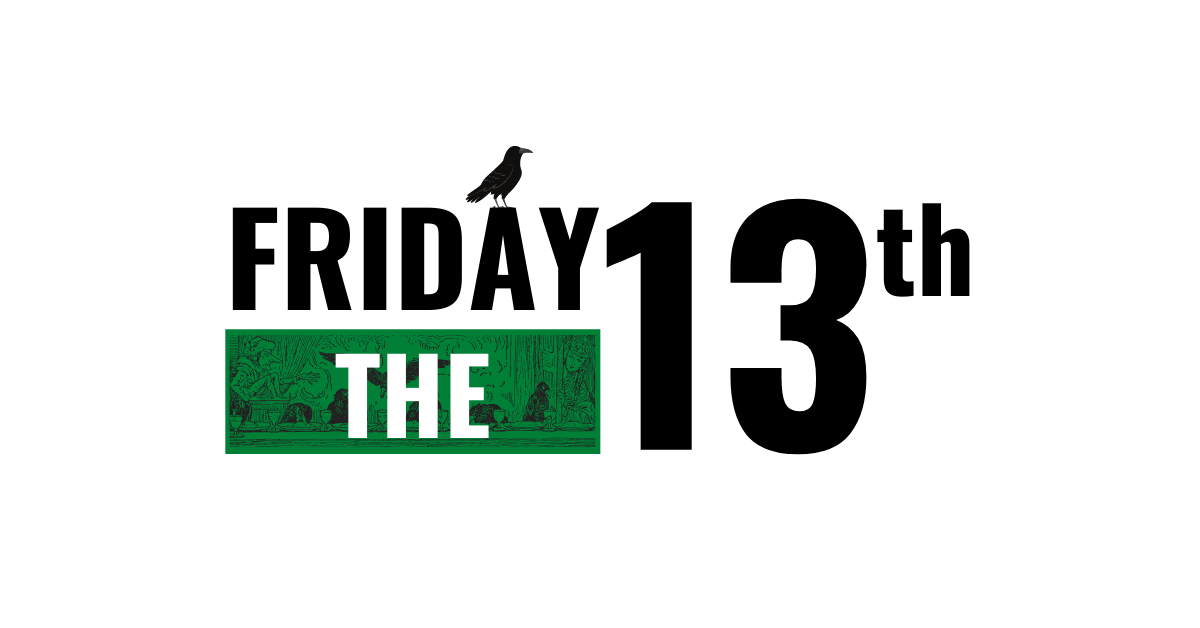 Taighde a thionscnamh.  March is widely recognized as the time when the feast of St. Patrick is celebrated, but it has also been specially designated as Irish history month.  In the spirit of learning not only about the patron saint of Ireland, but more extensively about the history, culture, arts, spirituality, language, literature, and other aspects about, and emanating from Éire we encourage your research curiosity to flow here in the Archives & Special Collections Center.  We welcome you to explore our primary source print materials along with a wide range of book titles from our McManus, Murphy, and Concannon collections among other specialized holdings available for review.

Please consult our Irish Studies LibGuide for more information about the wider value of na Gaeil experience and locating relevant materials through our various resource catalogs.  This site provides a central gateway to further inquiry.

We look forward to working with you and fostering a true “foghlaim” (learning) experience.  Go raibh maith agat!