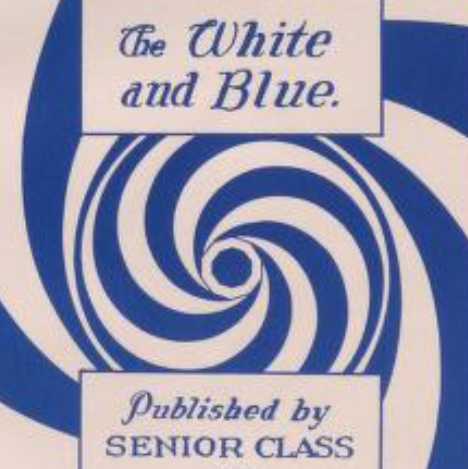 The concept of a collegiate yearbook (or annual) arose from the need to record student enterprise from the earliest volumes published during the early 1800s into a regularly anticipated fixture among most elite Eastern institutions and eventual adoption among many Catholic colleges and universities between the mid-nineteenth century into the early twentieth.
The trend of producing a yearly chronicle of academic life reached its zenith during the “Jazz Age” of the 1920s when the appeal of student life on college campuses entered the national conscious in a major way through positive and popular depictions in motion pictures, radio programs, and the daily press throughout the decade. Within this context, the Seton Hall
yearbook known originally as the “White and Blue” was christened in 1924.

From the first, the promise and appeal of memorializing the Setonia  experience received strong support throughout campus. Officially released during May of 1924 (covering the 1923-24 academic year), the “White and Blue” (prior to its being re-named and bearing the legend – “The Galleon”
in 1940 and 1947-2006) reflected its original and enduring objective to prepare: “through word and picture a summary of all activities . . .” within a published memorial designed to honor each graduating class from its introductory edition to last imprint.  Historically, the “White and Blue” was directly inspired in large measure by the colorfully written and illustrated student-run Dramatic Society playbills in vogue during the early 1920s.

From this inspirational point, the yearbook became one of the first regularly produced and distributed non-single event campus publication (aside from the College Catalogue) along with its counterpart “The Setonian” (student newspaper) which opened its presses a couple months
beforehand. This weekly (later monthly) serial became an allied publication with the “White and Blue” and regularly featured updates on yearbook issues including the promotion of staff members, production updates, and sale potential through its pages during the 1920s and 30s in particular. The yearbook reciprocated space-wise with “The Setonian” by including a special section on the newspaper and its activities under its Student Organizations chapter in most every volume that followed suit.

Yearbooks in both a general and traditional sense were produced with a firm timeline in place to cover any given 12-month academic period. Each provide a means of immortalizing the students, faculty, and administrators affiliated with Seton Hall and also offer “snapshots” of life on campus broken down by different departments or sections to honor popular trends during a respective time and place. The traditional format and sections found in most annuals with Seton Hall being no exception tended to include in varying order the following categories:  Welcome Page(s), Dedication; Graduates (Senior Portraits and List of Activities – Text and Photographs, 1920s-1950s); Undergraduates (Frosh, Sophomores, and Juniors); Faculty, Student Life (Activities, Current Events, Special Events, etc.); Academics (Departments, Who’s Who, etc.); Athletics, Student Organizations; Advertisement Section (earlier editions often featured a special emphasis on South Orange, Newark, and other local companies); and in some cases an Index, Colophon (statistical data), and a Notes/Autograph page(s) are found thereby providing a unique look at Setonia in a traditional and organized manner.

In regard to the first work plan based on historical models, the inaugural edition of the “White and Blue” featured an introductory forward by the College President at that time – Rt. Rev. Thomas H. McLaughlin, S.T.D. who wrote about the justification of this enterprise in regard to the institution and its lasting intrinsic value: “In years to come this book will serve to revivify events and intensify the love which every Setonian bears to Alma Mater. It will be an incentive to live up to the religious and educational standards presented and exemplified in daily life during college years.” This pioneering work in 1924 was undertaken directly under the leadership of Reverend John J. Sheerin, Faculty Moderator (this role would usually fall under the guidance of a priest until the 1950s when a member of the lay faculty usually assumed leadership duties); Editor-In-Chief, Francis J. Walsh; and a staff of researchers, writers, illustrators, photographers, and other volunteers which handled various duties associated with content management and marketing opportunities. During its first year, which involved a significant learning curve, the yearbook staff was able to finalize a volume in time for commencement and with funds collected via advertising space and subscriptions the “White and Blue” office collected $706.00 from various sources which helped defray supply costs and a
printing bill of $521.00 that led to a final first year net profit of $19.00. From here the consistent search for content and subscription drives became a regular fixture of the yearbook office thereafter.

The following year in 1925, editors of the “White and Blue” expressed the need for a yearbook with more clarity and eloquence after its first attempt succeeded and a methodical tradition had started. Therefore, finding a rhythm passing on experiences to the next class led to a sustained presence that lasted on campus for nine decades.

“Without a doubt if most Graduates were asked to name that event which, of the varied multiplicity of forms, loomed largest on the horizon of the scholastic year, their choice would be the publication of the Year Book . . . it is the result of their attempts to portray in succinct form, both to Alumni and Under-Grads, all that which occurred within the cycle of their daily lives at Setonia. WE present it with pride, for we fell that in it we have attained our purpose . . . We have merely presented phases from the humble life-drama of Setonians. Those figures that strutted unimportantly before the eyes of many are now paraded in a steady light. Those associations which engrossed our attention are seen in pleasant retrospect. We have turned the X-ray on the thought, spirit, deeds, and accomplishments of a student life and disclosed the skeleton. We have not attempted to analyze, to caricature, or to be distinctly erudite. In a word, our purpose was to present in the simplest way the record of a family life. If there are
occasional little traits of delicate feeling and sentiment manifested, we feel that the reader will not censure us for it. Especially informative in its character, the Year Book served to bridge the gap between the student and Alumnus. It is a story which a student tells to the “Old Grads.” A
story – yes, for it contains those varied elements that minster to our delight. It is enlivened by incidental adventures; it describes the places in which the scene is cast; the motley groups of character are skillfully drawn; genial humor pervades its pages, and the whole is a lively picture
of a real student life. It is well that such a story should be told occasionally by Setonains, for it is certain that there are many who will be interested in it . . . It is the wish of the editors that it will be greeted with the same spirit which made possible its present success and that future classes will find in it an incentive to carry on the pleasant duty of preserving the traditions of
their Alma Mater.”

By virtue of their timely focus, yearbooks are usually issued at the end of an academic cycle, but take several months to produce in order to: “. . . record, highlight, and commemorate the past year of a school.” Publications of this type had their ancestral origins in self-created student diaries, journals, and scrapbooks especially when it came to pasting snapshots, news clippings, cards, etc. and writing marginalia notes to accompany these artifacts. This personalized means of autobiographical expression became the general inspiration for the concept of school yearbooks in the modern sense and memorializing connections between a student and their
institutional ties as a result. The “White and Blue” was no exception. When it came to the Seton Hall approach in yearbook creation and looking at its legacy those digitized and found in the Digital Collections repository include the “White and Blue” (1924-1933, 1939, 1941-1942) and “Galleon” (1940, 1947-2006) in full text. However, due to financial issues and World War II no annual was produced during the years 1934-1938 and 1943-1946 respectively while the last edition featured is a combination of the 2002-2006 in one volume to honor the Sesquicentennial of the school.

The overall and specific appearance of each edition of the Seton Hall-produced yearbook from the “White and Blue” through the “Galleon” periods alike varied each time as depicted by the preferred graphics, font type, jargon, period humor, photographic poses, and other illustrative
choices that distinguished this specialized tome over time including such early loose themes as – “Collegiate Humor,” “Egyptian Motifs,” and “Medieval Learning” among others of note. After the final format for each edition was approved it was remitted to a professional publishing firm.
The first partnership made was with the Colyer Printing Company of Newark (1924-1933, 1947) and followed in sequence by publishing/printing concerns including Robert W. Kelly of New York City (1939); New City “Engravatone” of Union City (1940-1941); Baker-Jones-Hauser, Inc.
of New York City (1942); Campus Publishing of Philadelphia (1948-1949); and Progress Associates, Inc. of Caldwell (1950-55) leading up to the commemorative Centennial Edition of 1956.

From this landmark text onward, other professional publishers were employed and adopted the responsibility by working in tandem with various official local photography studios over the years in conjunction via the editorial team and publisher to create a finished product that is viewable in the electronic copies found on this site. In terms of size, page lengths varied from the first edition of 1924 that featured 78 inside pages and grew to most subsequent volumes featuring no less than a few hundred glossy sheets as a standard over time. The physical dimensions of each yearbook has also varied over the years with the most compact being the 1925 edition (8’ x 10”) and the 1974 and 1976 boxed editions (approx. 9 ½” x 12 ½” each) the largest with most other latter-day copies measuring the standard 9 ¼” x 12 ¼” extent.

The characteristic appearance features a traditional facing page approach with content bound within a hard cover (aside from the 1924 which was all paper) as the typically accepted template. Production usually consisted of a two-color (usually black and blue text with black and white photography) approach from 1925-1947 and multi-color editions eventually became
the accepted pattern from 1948 through 2006.

From a research standpoint, the Seton Hall yearbook remains a popular social history reference work that provides latter-day readers and family historians in particular with life in a prescribed time period. It also fosters memories and is a marker for those interested in historical research
and student demographic trends. On the sociological front, formally published yearbooks are becoming extinct in the traditional sense as social media and other means of presentation have modernized the process of student expression and memorialization.

As you can see upon reading different editions of the Seton Hall yearbook, the content offerings have changed from a balance of textual and photographic representation during the first six decades to a more photographic-based volume each year from the 1960s through the early-mid 2000s. At its core, the lasting need for such information is pointed out in the pages of the Diamond Jubilee History of 1931, whereby the value of the school yearbook was timely upon publication and remains manifest upon reflection. “The publication of a Year Book or ‘Annual’ by the graduating class has in recent years become a regular part of a college activity. Such a book is to the members of the class a permanent record of their achievements while in college, and a source of happy reminiscences in later life . . . Each succeeding issue of the “White and Blue” (and “The Galleon”) has been enlarged and improved in one way or another . . . ” which will benefit the reader of today and the future alike.

Access to the digitized collection of Seton Hall Yearbooks can be found via the following link –  https://scholarship.shu.edu/yearbooks/  Hard copies of the Yearbook can be accessed via the Archives & Special Collections Center during office hours and by appointment.

For more information regarding yearbook content and all other aspects of school history please feel free to contact us via the Archives & Special Collections Center at Seton Hall University – Alan.Delozier@shu.edu / (973) 275-2378.