South Orange NJ, November 30, 2020 –  The final game of the World Series attracted wide attention when Los Angeles Dodgers player Justin Turner, having been removed from the game after testing positive for Coronavirus, returned to the field to join his teammates for a championship celebration.  Turner removed his mask for part of the celebration, endangering teammates and their families. Turner also posed for photographs nearby other players and team executives.

A Seton Hall Sports Poll, conducted November 13-16 among 1506 random adults across America, found that 50 percent of respondents placed the most blame for this safety lapse on Turner himself, with 19 percent placing it on the Dodgers, and 7 percent on Major League Baseball.  Twenty-four percent had no opinion or did not know.  The poll has a margin of error of +/- 3.2 percent.

“There was a lot of finger pointing afterwards,” said Professor Charles Grantham, Director of the Center for Sports Management within the Stillman School of Business, which oversees the Seton Hall Sports Poll.  “Ultimately Turner apologized.  But this was not only a health and safety issue of the highest order at a time of a pandemic, it was also a major distraction from crowning a World Series champion.” 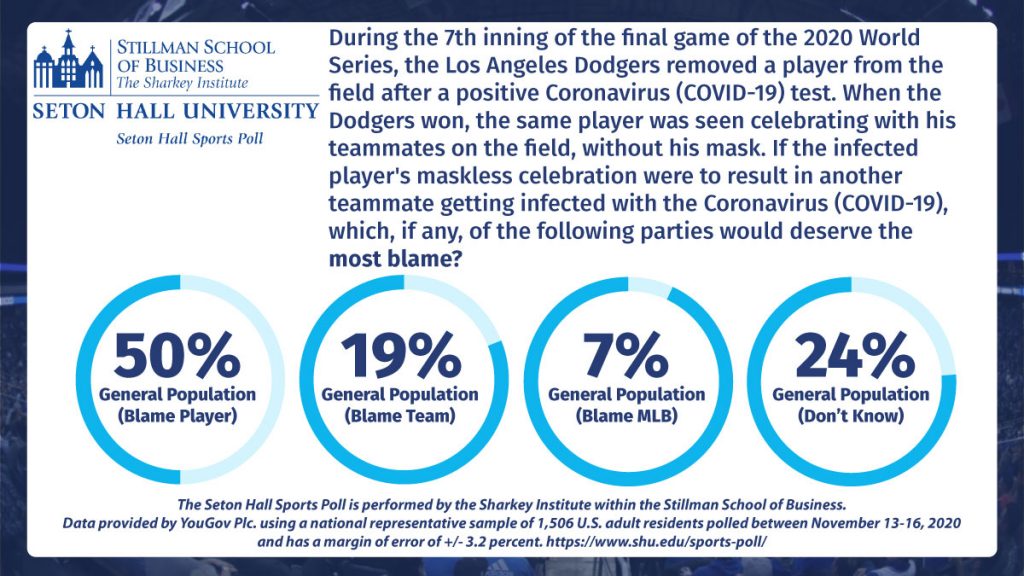 During the 7th inning of the final game of the 2020 World Series, the Los Angeles Dodgers removed a player from the field after a positive Coronavirus (COVID-19) test. When the Dodgers won, the same player was seen celebrating with his teammates on the field, without his mask. If the infected player’s maskless celebration were to result in another teammate getting infected with the Coronavirus (COVID- 19), which, if any, of the following parties would deserve the most blame?

← 26% Think NFL May Not Make It To Super Bowl, Are ‘Doubtful’ Season Finishes Successfully
Covid-19’s Impact on the Super Bowl →