The Quarantine Grounds was created in 1799 when New York State converted about 30 acres of private land at the Watering Place owned by St. Andrew’s Episcopal Church into public land for a quarantine and marine hospital.   The land is located in present day St. George immediately south of the Staten Island Ferry terminal.  The quarantine grounds no longer exists today having been obliterated by development, but if you look carefully the basic footprint and overall topography of the quarantine grounds is still discernible.  Some artifacts still remain and some have recently been discovered. 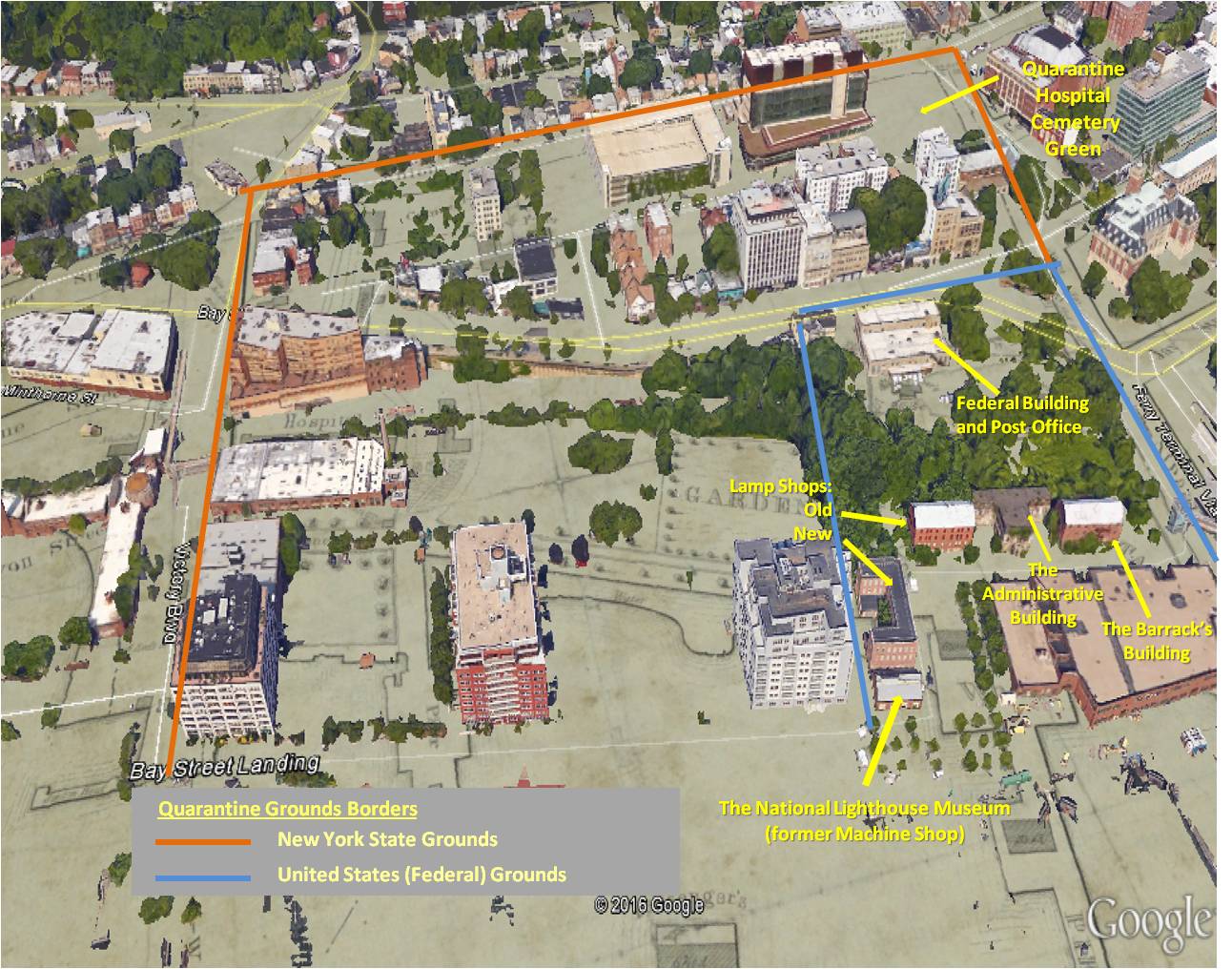 The 1845 Ewen map is overlaid onto a recent Google Map of the St. George area near the Staten Island Ferry terminal.

Shortly after the riots and burning of the Quarantine Ground buildings in 1858 New York State came to the sober realization that a complete quarantine facility would not be rebuilt on Staten Island.  New York State retained some of the land to create two roads (Bay Street and Central Avenue) and sold most of the remaining land to private interests.  The only direct evidence of the existence of a Quarantine and Marine hospital today is the recently created Quarantine Hospital Cemetery Green next to the new Staten Island Courthouse containing the re-interred remains of immigrants who died at the Quarantine. More information on the New York State portion of the Quarantine grounds is available here.

About 5 acres of the original New York State land was sold to the United States shortly after the State took the land by eminent domain, although the sale did not become official until 1814.  The US-owned portion of the Quarantine Grounds was used to facilitate Federal assistance with the State quarantine laws and to accommodate the US Revenue Cutter Service, an armed marine service that enforced the collection of tariffs and controlled the flow of goods through shipping.

Unlike New York State, the Federal Government held on to most of its 5 acres until the 1970s having put the land to several government uses. Most notable was the establishment of the General Lighthouse Depot of the United States Lighthouse Service (USLHS) in 1863 and the housing of the Coast Guard from 1939 to 1965.  A Federal Office Building and Post Office was built on the west end of the federal property fronting Bay Street in 1931.  In addition to a U.S. Post Office the building housed various federal offices over the years including the FBI (the target of a terrorist bombing in 1983) and military recruiting offices. The Army, Navy, Air Force, and Marines continue to recruit from this building (45 Bay Street, Post Office Building, Staten Island, NY).

The General Light House Depot was the primary manufacturing, supply, and maintenance arm of the USLHS’s 3rd District. This Staten Island facility constructed and maintained lighthouses and lightship lenses (a lightship is ship that serves as a lighthouse in very deep water). Several original Lighthouse Depot buildings still survive. The oldest building, known as the Barracks Building, was constructed in 1864 or earlier and may have been a building of the US Revenue Cutter Service, the only building directly connected to the original United States Quarantine Grounds facility. The Barracks Building, the Administration Building (1869) -an impressive Greek Revival-style building-  and the Old Lamp Shop (1868) have been abandoned for many years and still stand in a state of serious disrepair. Also surviving are six masonry oil vaults built into the hillside behind the depot buildings. These vaults contained large cast-iron, tin-lined storage casks to hold oil once needed to power the nation’s lighthouses. The current owner of these buildings, New York City Economic Development Corporation, is restoring these historic nationally land-marked buildings in a mixed-use redevelopment project known as Lighthouse Point.  The site of the former Federal Government pier has already been restored into a public plaza and fishing pier (Pier 1).

Also on the former General Lighthouse Depot property survives the New Lamp Shop (1907) and Machine Shop (1912). The Machine shop is now the National Lighthouse Museum.  This recently opened museum collects, preserves, and interprets objects related to the history and technology of lighthouses. Located in the south-eastern corner of the Federal portion of the former Quarantine Grounds the museum also documents and disseminates information on the history of the Quarantine Grounds and Marine Hospital.