Home » The Quarantine Grounds and Hospitals

The Quarantine Grounds and Hospitals

The Quarantine Grounds and Marine Hospital opened at the Watering Place on Staten Island in 1799 with Dr. Richard Bayley as the first Health Officer and physician. The Quarantine Grounds was New York’s first line of defense against the infectious diseases arriving on the ships entering New York Bay – one of the world’s great natural harbors. These ships carried cargo, merchant mariners, and very often, immigrants. Over the years a single “Marine Hospital”  on the Quarantine Grounds grew into several buildings serving multiple purposes. The hospital buildings were used to administer assumed curative treatments to the sick, but at best the staff more likely provided palliative care to people suffering from infectious diseases. The hospitals were also used  for the quarantine of people suspected of having been exposed to contagious diseases (although  people were also quarantined on the ships anchored in the New York harbor). The hospital patients were not only merchant mariners, US marines, and immigrants, however, but also residents of New York City (Manhattan) and Staten Island who were diagnosed with an infectious disease. After six decades the activities at the Quarantine Grounds came to an abrupt end. In 1858, on September 1 and 2, the residents of the surrounding area known at that time as Tompkinsville breached the protective walls of the Quarantine Grounds and burned down the buildings. Fortunately no one was killed in the riot.  Why did the riot occur after six decades of a relatively effective operation of the Quarantine? The cause of the uprising was complex and involved economic, political, and social factors as well as an escalating fear among the Staten Island residents that infectious diseases were spreading beyond the six-foot walls surrounding the Quarantine Grounds (Stephenson, 2004).

A survey created in 1845 by cartographer John Ewen and City Surveyor Daniel Ewen shows the main buildings on the Quarantine Grounds a little more than a decade prior to the destruction of the Quarantine. 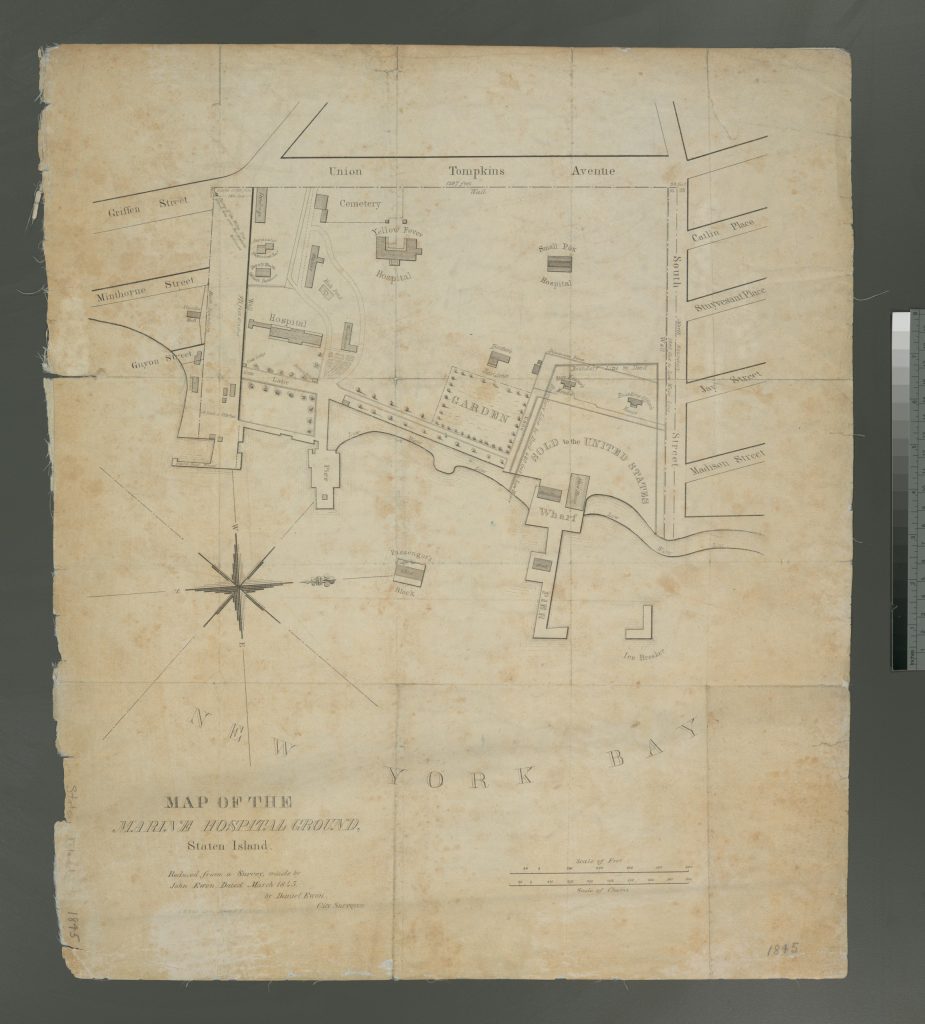 The names of the various hospital buildings appear to change over the years suggesting that the primary functions of the buildings may have changed depending on the shifting challenges to public health. The largest hospital noted on the Ewen map as the “Yellow Fever Hospital” was also known as St. Nicholas Hospital or St. Nicholas Hotel. Why St. Nicholas? It is most likely because the historical St. Nicholas is honored in several places around the world as the patron saint of ships and seamen. The “hotel” designation probably reflected a time when the building  was used to accommodate the seamen and higher class cabin passengers  waiting out a period of quarantine, while the passengers from steerage were placed in the other buildings or in tents and shanties erected on the grounds. St. Nicholas hospital was the largest building on the grounds with 3 stories and porticoes at  the north and south ends. Two floors were fitted with verandas on the west side of the building so that sick patients could convalesce in the fresh air.  On the roof, at its center,  there was an observatory decorated with a large statue of a sailor welcoming the people on the ships that entered the great New York harbor.

The hospital labeled as “Small Pox Hospital” was sometimes called the “Upper Hospital” because, like St. Nicholas Hospital, it was located on the top of a hill that slopped down towards the water. The Small Pox Hospital was not as large as St. Nicholas hospital, but it was the oldest building on the grounds and it had verandas on the West and East side of the building. The structure labeled simply as “Hospital” on the Ewen map was at the bottom of the hill closer to the shoreline. Not surprisingly this building was occasionally described as the “Lower Hospital”, but also as the “Women’s Hospital”.

Several other structures (mostly wood) can be seen on the Ewen map. The Doctor’s Residence and garden is shown fronting the bay. The other structures included buildings for the boatmen and stevedores, as well as barns, stables, wash houses, outhouses, and storage sheds.  A brick wall isolated the Quarantine Grounds from the surrounding neighborhood. The only entrance to the Quarantine Grounds was through a gate on the south side in front of the Lower Hospital or by boat. The map does not show the stream that gave the name to the Watering Place. The stream passed through the southern part of the property and provided an essential supply of fresh water. The location of the “Fish Pond” behind the Lower Hospital hints at its presence.

The bulk of the Quarantine Grounds  (about 25 acres) was the property of New York State and was run by the state and city of New York.  But the 5 acre parcel of land in the northeast corner of the Quarantine Grounds was owned by the United States of America.  The buildings on the Federal property were used by the United States Cutter Service for the enforcement of customs and to assist the city and state in enforcing the quarantine laws.  The largest  federal buildings were storehouses where the cargo of quarantined ships were unloaded  for “purification” and storage. The federal property also was surrounded by its own brick wall.

As a result of public pressure the New York State Assembly appointed a select committee on April 11, 1848 to determine if it was time to move the Quarantine from the grounds near Tompkinsville to another less inhabited place on Staten Island or elsewhere. The report was presented to the NY State Assembly on January 30, 1849. Although the recommendation was made to move the Quarantine establishment to a more isolated location (Sandy Hook, New Jersey), no action was taken. The report included an edited version of the Ewen map that reveals some of the challenges that the Quarantine was facing at the time. 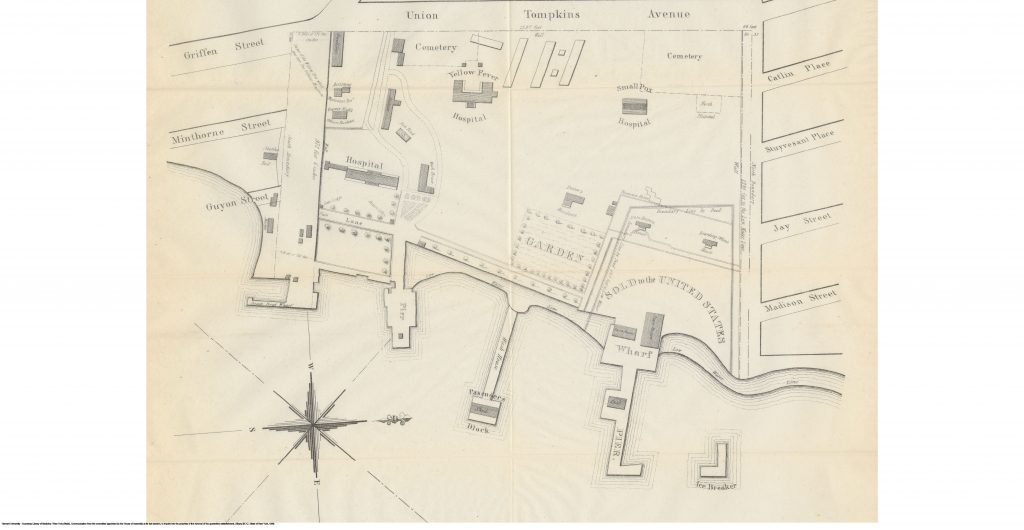 Communication – From the committee appointed by the House of Assembly at its last session, to inquire into the propriety of the removal of the quarantine establishment. State of New-York, no. 60, in assembly, Jan. 30, 1849.

Several structures described in the report as shanty hospitals were added to the original Ewen map. Next to Yellow Fever Hospital (St. Nicholas Hospital) along the west wall were four long wood structures (with two smaller outhouses). Next to the north wall near the Small Pox Hospital was another shanty hospital marked as the “North Hospital”. These structures were built 1846 to 1848 when Ireland’s Great Hunger (1845 – 1852) caused over a million Irish to emigrate (Kinealy, 1997). Very large numbers of Irish, German and other immigrants were arriving in New York at the time of this report. Starving and sick with the infectious diseases that they contracted on their voyage, many passengers died on the ship or on the Quarantine Grounds before they could complete their immigration.

Also inserted on the edited map is a second cemetery. The original cemetery, which can be seen at the south-west corner of the grounds on both versions of the map, was probably for the Quarantine employees. Customarily their graves were marked with tombstones. The added cemetery in the north-west corner of the grounds that was added along with the shanty hospitals was for mass burials of dying immigrants. Their graves were unmarked. Imagine what it must have been like for the immigrants in the “Small Pox Hospital” and the “North hospital” to observe outside their hospital window the mass burial of fellow immigrants. The Quarantine establishment was overwhelmed and operating well beyond its capacity.

The graves of these immigrants were summarily forgotten only to be rediscovered in 2001 during an archeological investigation of a municipal parking lot initiated by the building of the new Staten Island courthouse. The human remains exhumed from the  burial site were temporarily interred in a tomb at Moravian cemetery in 2007. On April 27, 2014 a black coffin with the bones of adult victims and a white coffin with the child victims were returned to the former Quarantine Grounds cemetery and re-interred, but this time with respect and dignity. The former Quarantine burial site has now completed its transformation into a memorial green where the dead were recently commemorated and more lastingly memorialized with a large scale public art project.

Communication from the committee appointed by the House of Assembly at its last session, to inquire into the propriety of the removal of the quarantine establishment. State of New-York, no. 60, in assembly, Jan. 30, 1849.