Elizabeth Ann Bayley Seton was born August 28 1774 In New York City either in Manhattan or Staten Island (no birth records have been found). She was baptized Episcopalian and converted to Roman Catholicism after her husband’s death.  She lived in several locations in lower Manhattan as a child occasionally  with her father Dr. Richard Bayley and later as a wife to the merchant William Seton Jr.  before leaving the city for Italy with her husband  in 1803. 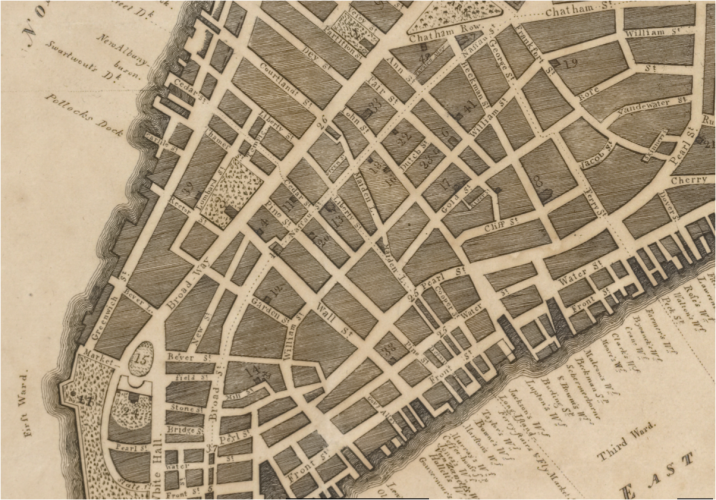 Lower Manhattan at the end of the 18th Century (“Plan of the City of New York” The New York Public Library Digital Collections.)

The street patterns and names of lower Manhattan have not changed very much over the last 200+ years. The  Google map below shows the approximate locations of the houses where the Bayleys and Setons lived.

The Shrine of Elizabeth Bayley Seton

Along the curve of State Street in the Battery in Manhattan there was once a row of Federal-style townhouses built by wealthy merchants.  All of these houses are gone today except for the Watson house at 7 State street which is still standing.  The original Watson house was built on the east side of the 7 State Street  plot in 1793 and in 1806 a west wing was added on what was the original house garden grounds  to complete the house as it is today.   Elizabeth Bayley Seton lived in the neighboring house at 8 State Street from 1801 to 1803. At this time the State Street house was waterfront property. From her window she could see all of the New York Bay and on a clear night as far as Sandy Hook.  She also had a great view of her father’s home at the Quarantine Grounds across the bay on Staten Island.  The Church of the Holy Rosary was erected on the lot of her former home. This church and the Watson house at 7 State Street is now the Shrine of Elizabeth Bayley Seton. Dr. Richard Bayley also lived in one of these townhouses (5 State Street)  for a time  when he was the Health Officer of New York City before he moved to his residence on the Quarantine Grounds at the Watering Place  in 1799. 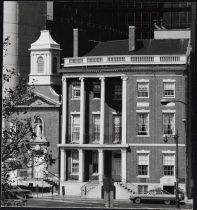 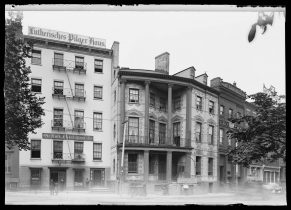 The Watson House at 7 State street is the only original Federal-style townhouse (1793) on State Street that is still standing. In this image the 8 State Street lot where the Seton house was located was occupied by a different building which was subsequently knocked down to build the Church of the Holy Rosary. (Edmund V. Gillon print from the Museum of the City of New York) 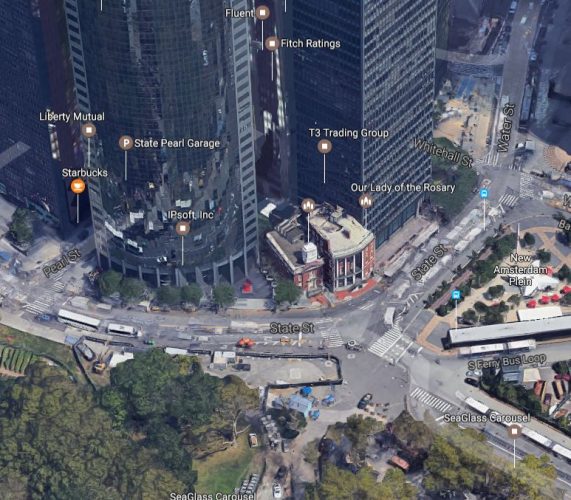 The Bayley Seton Shrine today at 7 State Street. The original Watson house still stands but it is no longer a waterfront property and it is now dominated by the surrounding skyscrapers (from Google maps February 10, 2017).