For six decades (1799 – 1858) New York State and New York City operated a quarantine and hospitals on the north-east shore of Staten Island, near the present-day Staten Island ferry terminal in St. George. The Quarantine was New York’s defense against infectious diseases associated with the movement of people. Diseases appeared to arrive at New York Bay in waves on merchant and immigrant ships. Although quarantine officials and doctors could not agree on the causes of disease New York State adopted the strategy of quarantine. The first formal system of quarantine was established in the 14th century by the Republic of Venice to protect their lagoon city.  Ships suspected of carrying maritime travelers with infectious disease were required to lay at anchor for 40 (“quaranta” in Italian) days.   Mariners and passengers inflicted with disease were placed in a quarantine station or lazaretto until they recovered or died.  The New York quarantine and marine hospitals were a critical and effective line of defense against infectious and contagious diseases. The defensive operations on the Quarantine Grounds came to an abrupt end when the residents of Tompkinsville, a neighborhood that gradually grew to surround the Quarantine Grounds, destroyed the buildings in a great conflagration.

The land that became the Quarantine Grounds was first outlined in a survey prepared by city surveyor Joseph Francois Mangin.  The survey is filed at Staten Island Borough Hall, Topographical Division and is dated April 13, 1799.   Below is my sketch of the map from the survey.  The bottom of the map is the shore along the New York Bay facing east. A meandering stream flowing down the hills on the south side (left) of the property emptied into the bay near the point marked A. It is this point that was referred to as the Watering Place by early explorers and marine merchants. It was here where men from anchored ships filled their casks with the pure fresh water needed to sustain life. Subsequently, the general area also came to be known as the Watering Place.  The stream has long been gone from the surface but may very likely continue to flow beneath the property of the former Quarantine Grounds.

Excerpts from the Mangin survey

“Beginning at Low Water mark on the south side of the small Inlet called the Watering Place ….  and  Thence  due  west 10 chains. Thence due North twenty three chains fifty links thence due east Eighteen Chains at low water mark Thence southerly along low water mark to the place of beginning.”

The distance numbers provided by the Magnin Survey was superimposed on a Google Map of the St. George area where the Quarantine once stood.  Because the shore line was filled in over the years (a common activity all over the New York City shore line) I began the measurements from the South West corner of the map (St. Mark’s Place and Victory Boulevard) using the Google Earth ruler tool.  The original 1799 borders of the Quarantine Grounds are shown in orange.  The blue circle is approximately where the stream reached New York Bay in 1799.

What is a Chain?

A chain is a unit of length once common in England and in countries influenced by England. In early America surveyors used a chain (literally) with 100 iron links to measure distance. As a measure of distance a chain is 66 feet. By the way, an acre is 10 square chains (1 x 10 chains or 66 x 660 feet). According to the Mangin survey the original Quarantine Ground borders had the following lengths: South border = 660 ft., West border = 1551 ft., North Border = 1188 ft. 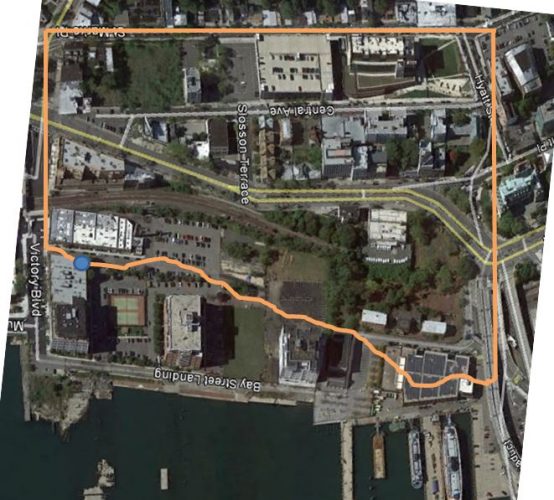