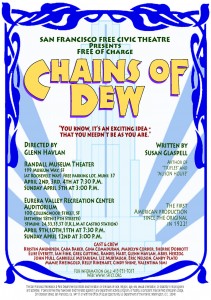 The Susan Glaspell Society is pleased to make available an abridged version of Susan Glaspell’s play, Chains of Dew, adapted and with a prologue by Cheryl Black, Associate Professor & Director of Graduate Studies, Department of Theatre, University of Missouri-Columbia.

This version, free to all, will enable theatre groups and universities to stage this witty and provocative play, the last ever produced by the original Provincetown Players in 1922. The only restriction is the request that Prof. Black and The Susan Glaspell Society be acknowledged in any program or print advertising connected with the production, by including the following note: “The script for this performance was adapted from the original by Cheryl Black, with the permission of Valentina Cook, and in cooperation with the Susan Glaspell Society.” 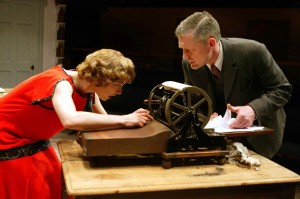