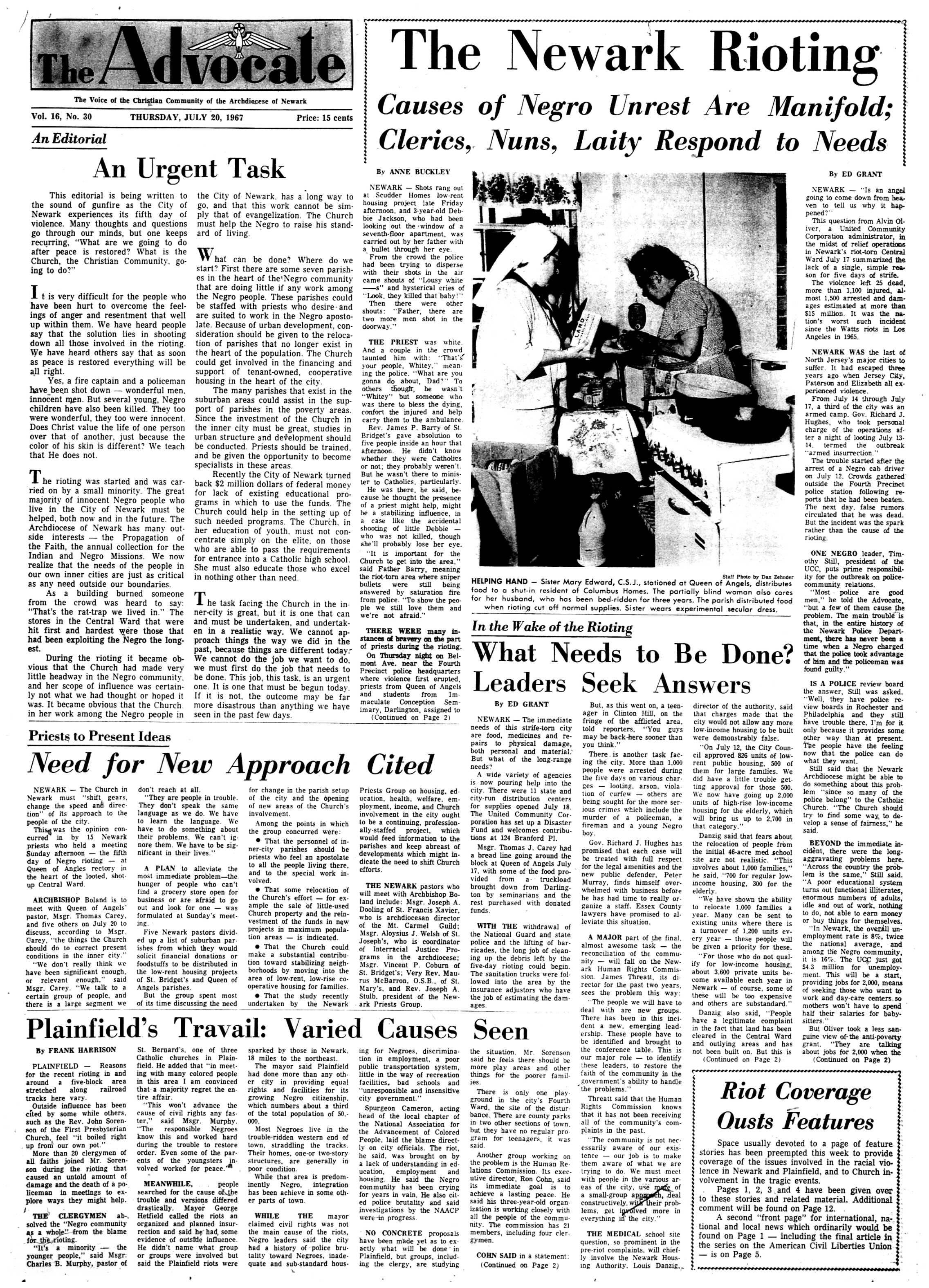 This period of civil unrest occurred between July 12 and July 17, 1967, was a protest by African-American residents in response to various discriminatory practices.  The causes associated with this event can be traced back through a long history of uneasy relations between lawmakers, law enforcement, and local citizens.  As Dr. Larry Greene, Professor of History notes in regard to the Newark Uprising that it “was a result of a city administration following a policy of exclusion from Newark civic life, denial of black input into public policy decisions, and the creation of a profound sense of disillusionment with the new northern promise land.”  This frustration manifested itself in regular cases of racial profiling, lack of political representation, lack of meaningful job opportunities, and an overall state of economic and social poverty that led to the events of July 1967.

A history of prior police-citizen confrontations became a regular source of concern.  Dr. Greene further stated that “for the 1967 Newark riot . . .  African-Americans were arrested and physically mistreated by the police (including the deaths of Lester Long, Bernard Rich, and Walter Mathis between 1965-1967) prior to the arrest of John Smith. It should be noted in the exhibit that a pattern existed in Newark, as in other cities, of police mistreatment of African Americans which contributed to Newark uprising.” With this historical context in mind, the spark for the events of mid-July came when a pair of white Newark policemen, John DeSimone and Vito Pontrelli, arrested an African-American cabdriver, John Weerd Smith who drove past their double parked police cars after signaling for a lane change.  He was stopped, arrested, beaten, and charged with assault of a police officer.  Witnesses recounted that an injured Smith was dragged into a local station house and his lawyer secured release from the jail later that evening.  However, rumors spread that Smith was killed while in custody, which resulted in a series of bricks, bottles, and other objects being thrown at the station building.  This also led others to protest at City Hall, set off fire alarms, or attack local businesses on Belmont Avenue and the vicinity.  Police in riot gear responded to these demonstrations, but this only led to further confrontations over the next few days.

The following day, a group of rioters broke all of the windows of other police stations and further defacement was reported on Springfield Avenue, the main shopping district in the African-American section of Newark at the time.  This was succeeded by other acts of protest, including destruction of property, theft, and bloodshed that resulted in a call to the New Jersey State Police and the National Guard who were enlisted to help restore the peace.  Gradually, the uprising was suppressed, but not before resulting in a total of 26 dead, 727 wounded, 1,500 arrests, and over $10 million ($73.3 million = 2017 dollars) in property damage.

This exhibit will be on display on the first floor of Walsh Library through the Spring of 2017 features various published articles from the Archives & Special Collections Center at Seton Hall University including a number of examples from our 1967 Newark Riots Newsclippings Collection (1967-1987).  The display attempts to show the story of this conflict from different media perspectives and illustrates the importance of remembering this protest and its powerful legacy.  There are several resources available that provides more detail on the Newark Uprising.  For further information please consult the following select list of websites for more details and perspectives about the Newark Uprising of 1967 . . .

After The Riots: The Search For Answers (Los Angeles Times)

For more about the exhibit and additional information leads in relation to the Newark Uprising contact Alan Delozier, Education Coordinator at – <archives@shu.edu> or (973) 275-2378.