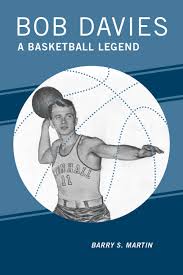 In the spirit and long established tradition of celebrating homecoming at Setonia (more commonly known as Seton Hall University Weekend), the Archives & Special Collections Center is partnering with organizers of this event to commemorate milestone events in school history for those in attendance.  With this in mind, here is an overview of various historical-inspired highlights that will connect our place with students, parents, alumni, and other special visitors who will be in South Orange to personally enjoy the sights, sounds, and commemorative aspects of campus from Friday, September 23rd-Sunday, September 25th in particular . . .

On Friday, September 23rd from 4:00 to 5:00 p.m. in the Team Film Room (located on the lower level of the Athletic Center) you are welcome to join author Mr. Barry Marin who has written a book on Bob Davies, the first All-American athlete in Setonia history who Mr. Martin will discuss in a talk entitled: “Bob Davies:  Superstar of Seton Hall’s Golden Age of Basketball.”  A great deal of research on his book was conducted via our various student and sports-oriented collections on site.  From his findings, Mr. Martin has outlined the focus of his book on Davies and his times in conjunction with the significance our alumnus brought to the game of basketball in the following manner:

“Seton Hall College was a major basketball power in the early and mid-1940s.  The “Wonder Five” team won 43-consecutive games – the sixth longest winning streak in NCAA Division I history. The “Mighty Midgets” won 28 games in a row – the second longest streak in Seton Hall basketball history.  The connecting link between these great teams was Bob Davies, Class of 1942, who Sports Illustrated has recognized as one of eight of the most influential players in the first century of college basketball – a list that included Bill Bradley (Princeton) and Patrick Ewing (Georgetown).  Setonian Davies introduced the behind-the-back dribble, pioneered the penetration and transition styles of play, and created several innovative passes.  His Naismith Memorial Basketball Hall of Fame plaque identifies him as the “first Super Star of Modern Professional Basketball.”  The colorful Pirate was such a draw that Walsh Gymnasium (now the Pirates women basketball team’s home court) was initially known as “the House that Bob built.”  Moreover, he was a genuine sports hero-role model. Author Clair Bee used him as the prototype for the character Chip Hilton in 23 juvenile fiction books.  During the 1946-47 basketball season, Davies accomplished a remarkable feat that no NBA player will ever duplicate.  He was league MVP for the Rochester (NY) Royals (now Sacramento Kings) and coached the Seton Hall “Mighty Midgets” to a 24-3 record.  One of the losses was by one point to the Holy Cross Crusaders who won the NCAA Tournament.”

Along with hearing his talk, Mr. Martin will have copies of the book – Bob Davies: A Basketball Legend, (Rochester, NY: RIT Press, 2016) available for purchase and reading at the event courtesy of the University Bookstore.  In addition, a special exhibit on the Setonia connections to Davies has been created in conjunction and cooperation with the Walsh Library Gallery.  A window box display (located in Walsh Library facing the Recreation Center) featuring various artifacts and items from the University Archives Collection have been assembled in honor of this talk and launch of the book.  This exhibit will be up through the entire month of September into October.

Prior to this talk, parents visiting campus are invited to join a historical tour of the University Grounds as part of a program entitled: “Campus Then and Now” which will take place on Friday, September 23rd from 2:00-3:00 p.m. starting in the Rotunda of Walsh Library.  This fun and informative stroll around campus will involve a historical overview of the school and detailed descriptions of campus architecture and significance of physical plant development over the years.   For more information on the tour and to register please consult the Seton Hall Weekend website .

Alumni and Student Life in particular are also being celebrated that weekend, and in recognition of the times and legacy of the Golden Pirates of 1966, a display case exhibit showing various items representing the anniversary of this class and their activities at Setonia can be found on the First Floor of Walsh Library (opposite the stairwell) near the entrance to the Archives & Special Collections Center.  Featured is collage of various illustrations showcasing special programs, snapshots, athletic information, student activities, and even the annual Galleon and “April Fool’s Edition” of The Setonian for that year.  This case will be available for view throughout University Weekend.