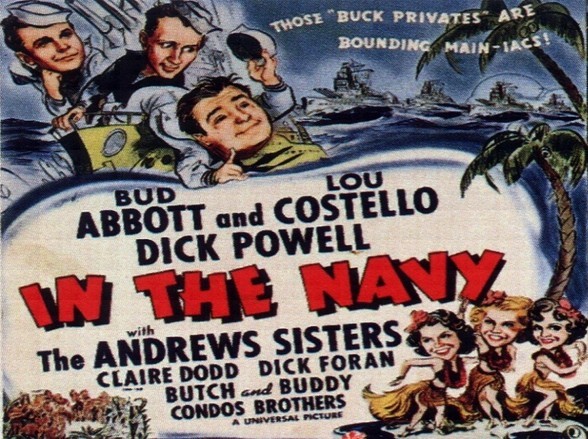 With the comedy duo of Bud Abbott and Lou Costello leading the way, January’s Buck Privates was a box office smash.

Now, just a few months later, Universal has brought the comedy duo back – alongside some new faces – for yet another service comedy. In the Navy, directed by Arthur Lubin, is the latest wartime flick bringing laughter to audiences across the country, a worthy but unofficial sequel to Buck Privates.

The new movie, released on May 30, immediately pays homage to the original film when Abbott and Costello, in sailor’s uniforms, hoist a flag that reads “Bud Abbott and Lou Costello in Buck Privates.” Quickly realizing the mistake, Abbott smacks Costello’s face before raising a new flag that reads “Bud Abbott and Lou Costello and Dick Powell in In the Navy.” For those who saw the original film, the scene serves as a humorous refresher as to the usual antics of the two actors. For those first being introduced to Abbott and Costello, it is a tone setter for the silliness to come.

The movie really gets going when the audience is introduced to Russ Raymond, a famous radio crooner. The role is perfect for Powell, given his experience in comedic musicals. Russ Raymond is actually just a stage name, though. The singer’s actual moniker is Tommy Halstead, and he uses his real name when he enlists at the San Diego Navy Base. He hopes to keep his identity a secret, but Raymond’s disappearance from the limelight does not go unnoticed.

Dorothy Roberts (Claire Dodd), a reporter for Facts Magazine and fan of Raymond’s, is assigned to track down the crooner. Once on Raymond’s trail, the determined journalist will stop at nothing to get the ultimate scoop: uncovering that one of America’s most recognizable voices has voluntarily sent himself off to war. All she needs is a photo of him in action.

Roberts’ quest leads her to sneak aboard Raymond’s Alabama, a battleship destined for Honolulu, Hawaii. With the help of sailors Smokey Adams (Abbott) and Pomeroy Watson (Costello), Roberts hides in a crate and finds herself a sailor suit of her own. Adams, an electrician, and Watson, a baker, are both unaware that they are in the presence of a celebrity. Things get tricky, however, when Roberts is discovered, forcing the two sailors to choose between helping their new friend and following orders.

Elsewhere on the ship, Pomeroy is doing all he can to win the affection of Patty, played by one of The Andrews Sisters. The courtship adds a romance to the service comedy that was absent in Buck Privates.

Overall, the film, while not as amusing as its predecessor, is still good for some fun. Abbott and Costello’s typical hijinks mix well with this story of deception and constant fleeing from the press. While comical on the surface, though, the 86-minute-long movie sends a much more serious message to the American public. Focused on Raymond, a celebrity, and his desire to enlist in the Navy, the film is a not-so-subtle reminder to viewers that anyone can—and should—contribute to the war effort. The movie essentially asks the question: If someone famous like Raymond is willing to make this sacrifice, why can’t the ordinary citizen?

Throw a few laughs on the surface and sprinkle in some slight pro-service propaganda underneath, and Universal has yet another hit with the globe at war.

Aside from its humor, In the Navy stands out thanks to its musical selections. A handful of songs written by Don Ray and Gene DePaul, including “Star Light, Star Bright,” “We’re in the Navy,” and “Hula-Ba-Luau,” allow Powell and The Andrews Sisters to showcase their classically trained singing voices.

Ultimately, it’s like the saying goes: The sequel is never as good as the original. Still, the usual goofs of Abbott and Costello, with the addition of Powell, Dodd and additional screen time for the sisters makes for yet another Universal hit in the footsteps of Buck Privates.