The Sacristy and the “Rooster Tower” 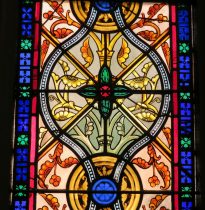 The windows of the sacristy depict a “Tree of Life” motif. If you look closely you will see that some of the glass panels are mismatched. They are the oldest windows in the pro-cathedral, probably installed shortly after the construction of the sacristy in the 1850s. They resemble windows designed by Jeremiah O’Rourke for other churches in New Jersey. Their maker is unknown.

The sacristy opens into the “Rooster Tower,” so named because of the rooster weather vane at its summit.

Several windows of simple design are in the base of the tower. Their origin is unknown. 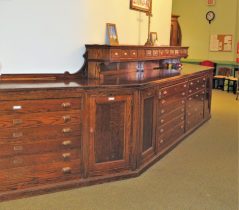 The vestment cases were installed in the sacristy in 1933. Of solid oak, they consist of four sets of drawers, six in each set, and two closets for copes and other vestments. They were constructed by Nicholas Sportelli and Son of Paterson.