The chapel was added to the church in 1859 and dedicated to St. Vincent De Paul. Its purpose was to accommodate overflow crowds. The seating originally consisted of benches without backs. They were arranged so the congregation could either face the altar, originally located where the tabernacle is now placed, or the main body of the church.

In 1906, the chapel was transformed into a baptistery with the removal of the altar and the setting of a baptismal font in its place. The archways to the church were completely open until the 1982 renovations. At that time a transparent plastic divider was built separating the chapel from the body of the church. At its dedication, the renovated chapel was named Our Lady Chapel. The baptistery was removed and the chapel altar and the tabernacle platform were installed as part of the 1982 renovations. They incorporated brass filigree from the 1906 altar rail in the main church, which was removed at that time. In 1999 the walls were removed and replaced with sheetrock and the doors were frosted.

Over the tabernacle was an elaborate Gothic canopy. It is made of carved black walnut and originally was the covering of the baptismal font. It probably is the work of John Jelliff, who carved the cathedra in the church.

A Gothic frame surrounds each vignette. The figures are set before a damascene cloth draped in the background, the color of which changes with each set of windows. Above and behind the drapery, the artist depicts various landscapes.

As you enter the chapel the windows on the left, beginning at the rear and going forward are: 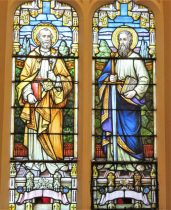 Simon was the brother of Andrew who led him to Christ. He was renamed “Peter” (rock) by Jesus to indicate that Peter would be the rock on which the Church would be built. According to an account found in apocryphal writings, he was crucified head downward because he claimed he was not worthy to die in the same manner as Christ. The traditional portrayal of St. Peter, likewise from the apocrypha, is that of a bald man with a short beard. He is so depicted on this window.

The apocrypha were pious writings composed in the second and third centuries. Although they followed the form of gospels, acts, and epistles, they were  not deemed inspired by God and therefore were not included among the books of the Bible. however, they were revered by many and are the source of many Christian traditions.

In one hand Peter holds the “Keys of the Kingdom.” In Matthew’s Gospel, Peter is given these keys as a symbol of the power of forgiving or retaining sins. These crossed keys are today the most recognized symbol of the papal office. In his other hand he holds a book which recalls his traditional authorship of two epistles.

He is the patron of the Papacy, of bakers, butchers, cobblers, and fishermen.

A tentmaker, born in Tarsus, a Roman citizen and a Pharisee, Paul was on his way to Damascus to arrest Christians when he was knocked to the ground, struck blind by a heavenly light, and given the message that, in persecuting Christians, he was persecuting Christ. The experience had a profound spiritual effect on him, causing his conversion to Christianity. He was baptized, changed his name to Paul to reflect his new life, and began traveling and preaching. He was martyred in Rome.

The traditional portrayal of St. Paul, which also originates in apocryphal writings of the second century, is that of a man with a long, pointed beard. He is so shown here. He carries a long sword, a reminder that the Word of God is a “two-edged sword.” He also carries a book denoting his authorship of many of the epistles in the Christian Scriptures.

He is the patron of the Cursillo movement, evangelists, lay people, and of Malta. 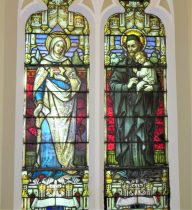 The Blessed Virgin is shown in the blue mantle with which she is so often portrayed. Her heart is exposed. The fire symbolizes the intensity of her love for God, the flowers the purity of her heart, and the sword the sorrows that pierced it. As a detail, the artist gave Our Lady a red slipper.

St. Vincent de Paul (1580-1660) is shown as a 17th century priest, holding a child in his arms. The child represents St. Vincent’s work in behalf of orphans and the poor. After escaping enslavement by pirates in 1607, he began a life of charitable works that led to his founding of the Daughters of Charity. In 1625 he founded the Congregation of the Mission, a religious order of men commonly called the Vincentians. His example of service to the poor led to the foundation of the Society of St. Vincent de Paul in the early 19th century. The society was very active in St. Patrick’s Parish and the chapel, now “Our Lady Chapel,” was originally called the “Chapel of St. Vincent de Paul.”

He is the patron of charitable workers, hospital workers, lepers, prisoners, and the St. Vincent de Paul Society.

Saint Ann with the Blessed Virgin And Saint Joachim

Ann is not mentioned in the Bible. We know her name from the apocryphal writings of the second century. Both Mary and Ann are shown barefoot. St. Ann, with hand raised, is portrayed teaching her daughter. Mary, with flowers in her hair, looks respectfully toward her mother.

St. Ann is the patroness against poverty, of Canada, childless people, grandmothers, mothers, pregnant women, and women in labor.

We know St. Joachim’s name from the apocryphal writings of the second century. He too is barefoot. According to the apocrypha, Joachim was not allowed to offer sacrifice because he had not fathered a child. Later, after a period of prayer in the desert, a daughter, Mary, was born to Ann and Joachim. The tradition tells us that he and Ann brought their only child, Mary, to the temple at the age of three and she remained there. Lambs and doves for the sacrifice, which Joachim was now allowed to offer, complete the picture, and he holds a rod culminating in a sharp instrument used for ritual sacrifice.

He is the patron of fathers and grandfathers.

The patron saint of youth, St. Aloysius (1568-1591), against his parents’ wishes, entered the Society of Jesus, the Jesuits. While nursing the sick during the 1591 plague in Rome, he was taken ill and died. The crucifix shows his devotion to the crucified Lord, and the lilies represent his purity of life.

He is the patron of youth, Jesuit students, and AIDS caregivers.

Little is known of St. Agnes beyond her third-century death as a martyr. Emperor Constantine I erected a magnificent church in her honor just outside the walls of Rome. On her feast day two lambs are blessed at her church in Rome, and then their wool is woven into the palliums (bands of white wool) which the pope confers on archbishops as a symbol of their jurisdiction and their close connection to the Holy See. The palm in her hand is a symbol of martyrdom. She often is shown with a lamb because the Latin word for lamb, agnus, is similar to her name, Agnes. She too has a red slipper.

She is the patroness of the Children of Mary, engaged couples, and rape victims. 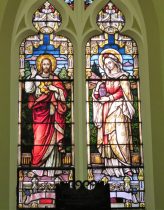 Devotion to the Sacred Heart of Jesus emphasizes Catholic belief that Jesus is the Word of God made man. His physical heart, united to his divinity, is a symbol of redemptive love. In 1856, the Feast of the Sacred Heart was extended to the entire Church. The crown of thorns recalls the Passion and the fire signifies the intensity of Jesus’ love.

Mary of Magdala was a follower of Jesus who was present at the crucifixion. Our Lord appeared to her after his Resurrection on Easter morning. Later traditions erroneously equated Mary with the sinful woman who anointed Jesus, and with Mary of Bethany, who also anointed Jesus. Our Mary Magdalene, beautifully dressed and bejeweled, is the result of this error. She is pictured with the jar of oil with which Jesus was anointed.

She is the patroness of penitent sinners. 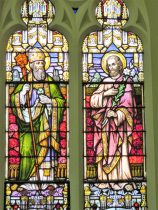 St. Patrick lived from about 390 to about 461. Probably born in England, he was the son of a deacon and the grandson of a priest. He spent some years in slavery in Ireland having been captured by border raiders. Returning to England, he was ordained priest. He returned to Ireland and evangelized Ireland from the north. He established his episcopal see at Armagh. Tradition says he used the shamrock to illustrate the concept of the Trinity and drove the snakes from Ireland. He is shown here in the vestments and jeweled miter of a medieval bishop, holding the crosier in one hand. In the other he holds the shamrock. Among the details of episcopal dress that did not escape the artist are the gloves St. Patrick is wearing.

He is the patron against snakebites, and of Ireland, Nigeria, and excluded people.

The spouse of the Blessed Virgin and the foster father of Jesus, St. Joseph is portrayed in a very traditional manner. According to the apocrypha, Joseph and other young men were called to the Temple in Jerusalem. One was to be chosen as Mary’s spouse. During the ceremony, Joseph’s walking stick sprouted lilies. This was seen as a divine sign, a sign of his purity, and he was chosen to be Mary’s spouse. Therefore, he is normally portrayed with the walking stick with lilies. He is regarded as an example of the purity symbolized by the lilies. St. Joseph is also depicted barefoot.

He is the patron of families, of engineers, of a happy death and of the Universal Church, Canada, China, Korea, Mexico, and Vietnam.

« The Corbel Heads | The Sacristy and the "Rooster Tower" »