An Artistic and Symbolic Description

St. Patrick’s Pro-Cathedral, built in 1850, at the height of the American Gothic Revival, is an excellent example of the simpler versions of the style. This simplicity is reflected in the choice of exterior material, brick rather than stone, and the lack of spatial complexity in the interior plan. A straightforward nave and aisle scheme, the church has side aisles terminating in delicately detailed apses. The nave, the central space of the building, resolves its arcaded progress in a columned multifaceted full-height apse. 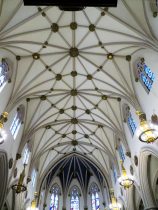 The architectural details are typical of the period and style, in not being exact copies but highly stylized and freely interpreted renditions. The vaulting of the ceiling, highlighted by the recent repainting, is a fine example of German Gothic with its cats- cradle of ribbing and heavily foliated, newly gilded, bosses. Bosses began as a decorative trick to cover up the inelegant intersections of multiple ribs and ultimately developed, as here, into important architectural details.

The other important element in the architectural program for the pro-cathedral is the Gothic tracery of the windows. Unlike most examples of Gothic Revival, the designer of the church did not select one simple form for the lacey stone work at the tops of the windows, rather he chose to use multiple examples from the pattern books he referenced, making for an interesting catalogue of Gothic forms. 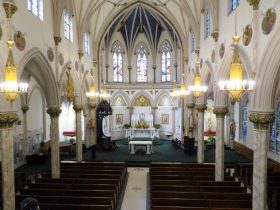 Note should also be made of the original altar furniture still in place. The High Altar, a greatly diminished remnant of its original glory, is deeply carved with high style Gothic details, emphasized by the new color scheme that picks out these details. The credence table, to the right of the altar, echoes the details and finish of the pro-cathedral masterpiece, the John Jelliff Cathedra, the Episcopal Throne. This black walnut architectural fantasy, by the prominent Newark furniture-maker, is one of the finest extant examples of the nineteenth century carver’s art.

The latest renovation of this venerable seat of the Church in Newark has highlighted and enhanced the architecture of the pro-cathedral.

The structural bones of the building, the ribs of the vaulting, the arches of the nave, the tracery of the windows, all have been emphasized by the dark stone color contrasting with the light stone color of the vaulting and walls. The marbleizing of the semi-attached columns of the aisles and the clustered columns of the nave enhance the vertical thrust of the interior.

The focal point of the new interior program is the chancel apse, the sanctuary of the church. Here the decoration, both old and new, is more elaborate; the moldings are gilded and patterned.

There also are murals, depicting the escutcheons of the first five bishops of the Church in Newark. These have been cleaned and brightened. The columns of the upper register have been marbleized in verde antiqua, a green marble, while the clustered columns of the blind arcade below have been marbleized in red brown marble. These are bracketed by columns marbleized to match those of the nave, thus visually integrating the two spaces. The walls between these column clusters have been given a stone patterning that replicates the original wall treatment of the 1850’s, as revealed by the restoration. The vaulting of the sanctuary has been painted midnight blue with gold stars, representing the vault of heaven.

This color scheme employs the colors of the liturgical year — green, red, blue, gold and white, which is found in the marble of the new altar and reredos.

The new altar in white and green marble with red and gold accents is the focus of the revived sanctuary. Behind the new altar, atop the antique Gothic altar, is a new marble reredos, a stylized reinterpretation of the original, with its Gothic arches and green columnettes capped with carved antique capitals. The new reredos serves as a backdrop for the church’s new tabernacle and the beautiful bronze crucifix mounted above. 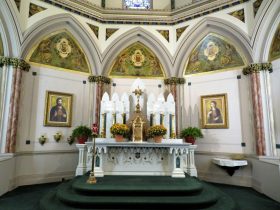 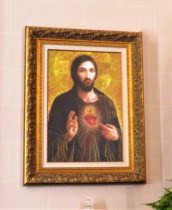 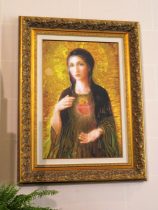 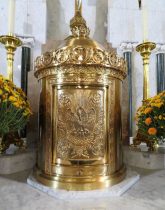 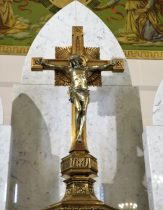 The bronze tabernacle, about 100 years old, formerly was in another church. It was refurbished as a gift of Father Joseph Doyle, a former parochial vicar of the parish. Father Doyle also contributed the magnificent refurbished Art Deco crucifix from the same era. These splendid fixtures enhance the renovated sanctuary.