Perhaps the most spectacular feature of St. Patrick’s is the bishop’s chair. According to church tradition, early bishops preached and taught, not from a pulpit, but from a chair in the sanctuary of the church. The Latin word for chair is cathedra. Because of the presence of the chair, a bishop’s principal church is called a cathedral. Over the centuries, the bishop’s chair took on the appearance of a royal throne. Few monarchs can claim a throne as glorious as the cathedra in St. Patrick’s Pro-Cathedral. Designed and executed by John Jelliff, Newark’s most important furniture, chair and cabinetmaker of the last half of the 19th century, the achievement is spectacular. “It is made of black walnut, gracefully carved, and extends upward of 20 feet, where it projects forward about six feet and culminates in pinnacle shape at the height of about 25 feet…Various devices of a religious and ornamental character, including a representation of two angels under the projection above, are ingeniously carved upon it.”

Interestingly, what appears to be the throne is actually a great canopy. The chair itself is small, low-backed, and uncomfortable.

In the center of the canopy is a circular panel displaying the coat of arms of the archbishop of Newark, Cardinal Joseph W. Tobin, C.Ss.R. For the first time in the history of the pro-cathedral, this coat of arms is surmounted by the bright red cardinal’s hat, called the galero. Considerate of the comfort of the archbishop, Monsignor Mahoney moved the uncomfortable little chair to the sacristy and replaced it with a larger one with armrests. Perhaps foreseeing the future, Mahoney chose a chair upholstered in the cardinalatial color of bright red rather than the purple or green appropriate to an archbishop. The original chair has been reupholstered in scarlet as a gift of Yolanda Sansone. Both chairs are used according to the wishes of the cardinal. 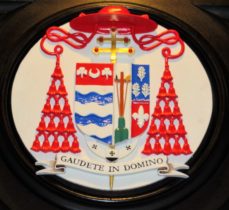 Several canceled checks payable to Jelliff in the Archives of the Archdiocese of Newark at Seton Hall University indicate the cost. The checks are for $68.00, $919.25, $177.00, and $43.25. Jelliff also designed the cover of the baptismal font, so some of these payments may reflect that as well. The font cover now serves as a canopy over the tabernacle in the chapel. More than likely, the credence table in the sanctuary is also by Jelliff.