From the left, facing the sanctuary, the statues are:

In 1628, the original 18-inch-high statue was donated by Princess Polyxena von Lobkowitz to Our Lady of Victory Church in Prague, Bohemia (Czech Republic). It was dressed in royal robes and crown as a sign of faith in Jesus Christ, the King of the world. His right hand is raised in blessing, and in his left He holds a golden globe surmounted by a cross, representing the world under the rule of Christ. This statue was donated to St. Patrick’s in 1950.

St. Patrick, patron of the pro-cathedral, is portrayed wearing the robes of a bishop, holding a shamrock in one hand, and the bishop’s staff, the crosier, in the other. Beneath his feet are two coiling snakes, recalling the story that the saint drove the snakes out of Ireland. His vestments are green, a liturgical color as well as the color associated with Ireland, of which he is the patron saint. St. Patrick is also the Patron of Nigeria and of the archdiocese of Newark. He is a fitting patron for the varied, multi-ethnic and multi-racial congregation of the pro-cathedral. One of the western hemisphere’s oldest churches is San Patrizio in Loiza, Puerto Rico, constructed in 1645. The church has always boasted its Afro-Hispanic heritage and culture. The statue was installed in 1950 in memory of Rev. Edward Kern.

This statue of St. Joseph is one of the original statues of the pro-cathedral, dating to the 1850s. St. Joseph, Spouse of the Blessed Virgin Mary, Foster Father of Our Blessed Lord, holds a lily, symbolic of his purity. Originally it stood above the side altar on the right, where the statue of our Lady of Providence is now.

The inscription on the plaque beneath the statue reads: “This Statue was Blessed by the Rt. Rev. Bishop (Corrigan) on the Occasion of the Solemn Dedication of the Diocese of Newark to the Sacred Heart of Jesus on the Feast of the Immaculate Conception Dec. 8th A.D. 1873.” The statue was made by the firm of Franz Meyer of Munich, Germany and purchased by Monsignor Doane in 1872.

Several details of the statue are unusual. The Heart of Jesus is usually portrayed in the center of the chest. On this statue the Sacred Heart is on the left side. Jesus is portrayed wearing a stole and what appears to be a cope, an unusual feature on a statue of the Sacred Heart. The stole is crossed. Before the Second Vatican Council (1962-1965), it was customary for priests to wear the stole in this manner. The Irish-Americans of St. Patrick’s demonstrated their devotion by placing the statue on a pedestal decorated with shamrocks.

Thérèse Martin (1873-1897), better known as the “Little Flower,” entered the Carmelite Monastery of Lisieux and subsequently became Sister Thérèse of the Child Jesus and the Holy Face. She suffered from tuberculosis and in her L’histoire d’une âme, The Story of a Soul, she reflected not on what had occurred but on grace at work in events. She was canonized in 1925 and declared a Doctor of the Church in 1997. She is the co-patron of the missions wiht St. Francis Xavier, co-patron of France with St. Joan of Arc, and patroness of persons suffering with AIDS.

Our Lady of Providence

The Blessed Virgin is shown seated with the child Jesus on her lap. The Latino community presented this magnificent statue to St. Patrick’s in 1985 to mark the 135th anniversary of the parish. In 1969, Pope Paul VI declared Our Lady of Providence the Patroness of Puerto Rico.

In the vestibule are two statues, Saint Aloysius Gonzaga and Saint Rita of Cascia, probably brought from Germany by Monsignor Doane. On the right:

Aloysius de Gonzaga (March 9, 1568 – June 21, 1591) was a member of an Italian noble family who became a member of the Society of Jesus, the Jesuits. While still a student at the Roman College, he died as a result of caring for the victims of an serious epidemic. He was beatified in 1605 and canonized in 1726. As he was dying, he gazed at a crucifix he held in his hands and so is depicted holding a crucifix.

Saint Aloysius is the patron saint of students and the patron of all Christian youth. For his courage and compassion in the face of disease, he has become the patron both of AIDS sufferers and their caregivers.

In the vestibule on the left:

Saint Rita of Cascia (Born Margherita Lotti 1381 – 22 May 1457) was was a wife, mother, widow, and member of a religious community. Born at Roccaporena in central Italy, Rita wanted to become a nun but was pressured at a young age into marrying a harsh and cruel man who terribly abused her.

She subsequently joined an Augustinian community of religious sisters.  Various miracles are attributed to her intercession, and she is often portrayed with a bleeding wound on her forehead, which some believe indicates a partial stigmata.

Beatified in 1626, Rita was canonized in 1900. She has acquired the reputation, together with Saint Jude, as a saint of impossible cases. Rita also is the patroness of abused wives, abuse victims, persons in difficult marriages, widows, the sick, and the suffering.

In Our Lady’s Chapel:

The statue of the Immaculate Conception once stood on the side altar in the pro-cathedral where there now is a statue of St. Patrick. Made in Germany, this elegant statue has been part of the pro-cathedral since its beginnings. Mary is crowned, robed in blue, standing on a globe and crescent moon, her foot crushing the head of the serpent. This is the traditional way in which Our Lady, under her title of the immaculate Conception is depicted. This is one of three almost identical statues, purchased from the same maker in Germany. A second is in St. John’s Church. The third is in Newark Abbey, St. Mary’s Church. the statue in St. Mary’s Church was damaged during anti-Catholic riots in the early 1850s and still shows the damage as a way to recall these unhappy events. 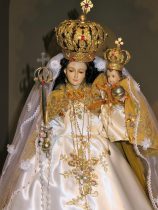 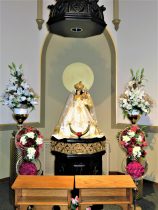 Dating back to 1586, a statue of Our Lady has been venerated in El Quinche, Ecuador. Known as “La Pequeñita,” the Beloved Little One, Nuestra Señora de Quinche is particularly loved by the native peoples of Ecuador. On a regular basis, ladies of the Ecuadorian community create magnificent dresses for the statue and change her costume. Over the statue, the Ecuadorian flag shows devotion to the Blessed Virgin and implores her protection on the nation of Ecuador. 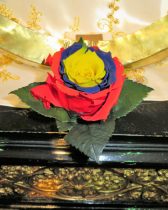 In the back of the church, on the left:

A magnificent crucifix is affixed to the pillar on the left as you enter the pro-cathedral. It formerly was set on a pillar just in front of the sanctuary on the left as you face the alter.Some of the paint on the corpus has worn away from the touch of faithful petitioners. the cross is a beautiful example of the Art Nouveau period of the late 19th century. Such a large crucifix was a fixture in most churches in past years. The custom was to pray before it after receiving communion. The prayer was placed on a card near the crucifix.

Prayer before the Crucifix

Look down upon me, good and gentle Jesus,
while before Thy face I humbly kneel and,
with burning soul,
pray and beseech Thee
to fix deep in my heart lively sentiments
of faith, hope and charity;
true contrition for my sins,
and a firm purpose of amendment.
While I contemplate,
with great love and tender pity,
Thy five most precious wounds,
pondering over them within me
and calling to mind the words which David,
Thy prophet, said of Thee, my Jesus:
They have pierced My hands and My feet,
they have numbered all My bones.”
Amen.

« The Clerestory Windows | The Corbel Heads »