Nearly Half Expect Game to be Less Exciting Than Previous Years;
Nearly Two-Thirds Won’t Attend Watch Parties With Others

42 Percent Say They Will Not Watch, Though More Using Smart Devices, Less TV

South Orange NJ, January 27, 2021 – The Covid-19 virus will seemingly have an impact on this year’s Super Bowl, with almost half of respondents to a Seton Hall Sports Poll saying they expected the game to be less exciting, and nearly two-thirds saying they will stay home and not watch at parties or in bars.

These were the findings of a new Seton Hall Sports Poll, conducted January 22-25 among 1,522 adults, geographically spread across the country. The Poll has a margin of error of +/- 3.2 percent.

Asked whether the restricted fan attendance, along with restrictions and limitations on players and gameplay would make the game less exciting than previous Super Bowls, nearly half – 47 percent – agreed, with only 28 percent disagreeing. Twenty-six percent neither agreed nor disagreed.

“In the midst of the pandemic and all its uncertainty, it looks as though the NFL will complete the season and receive its television revenue,” said Professor Charles Grantham, Director of the Center for Sport Management within the Stillman School of Business, which oversees the Seton Hall Sports Poll. “They successfully navigated a challenging campaign, but the adjustments may have impacted the public’s perception of the game as reflected in these findings.” 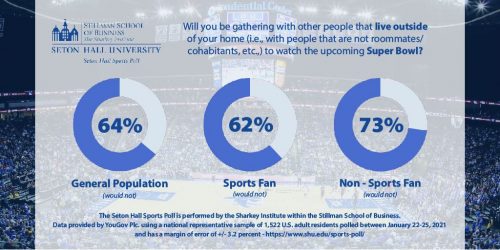