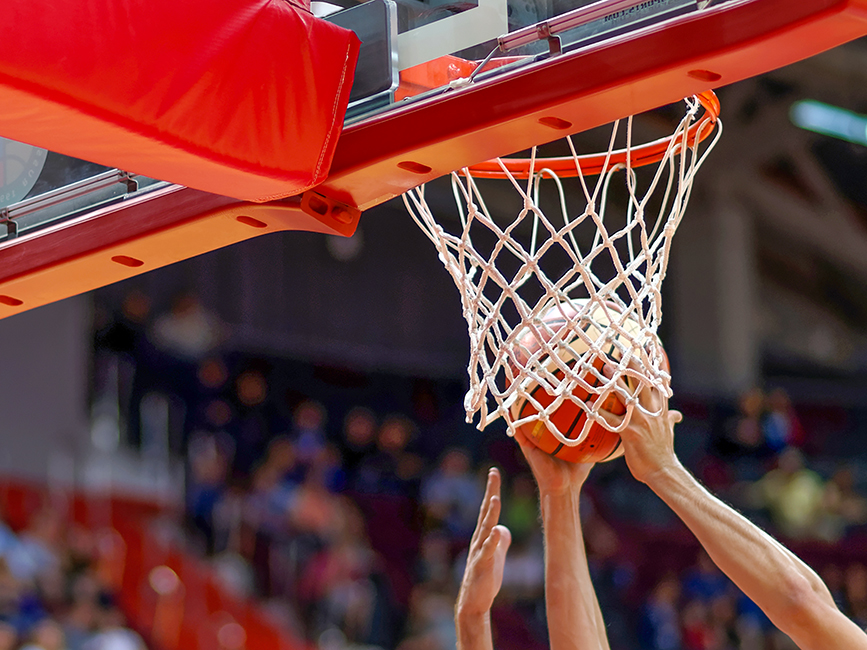 Published October 19, 2018
Seton Hall offers a wide variety of options for students looking for a career related to the big business of sports.

Even before Seton Hall began programs in sports media for the next generation, the school produced dozens of writers, broadcasters, editors and announcers, some of them joining the biggest names in the business.

Peyton Adams grew up a passionate fan of the Philadelphia Eagles. By her sophomore year at Seton Hall, the Medford, New Jersey, native had chosen sport management as one of her majors.

But perhaps Adams was always destined for a career in sports. “Fun fact about me, my parents named me after Peyton Manning,” she says of the legendary NFL quarterback whose distinctive name caught the attention of her mom.

Years after her name linked her to football royalty, Adams says she talked sports with a neighbor who said, “‘Wow, you should go into sports; you really know your stuff.’ And I was like, ‘Oh, I’ve never really considered it.’ I’ve grown up with it, I know a lot about it, but that never struck me, just because I had never thought about the opportunity, and it’s not a huge female industry. So it wasn’t really anything on my radar.” That changed. And fortunately for Adams, she attends an ideal school for students pursuing a life in sports.

Led by Charles Grantham, former executive director of the National Basketball Players Association, the Center for Sport Management at the Stillman School of Business offers students opportunities in everything from NBA marketing to finance work for the NCAA. Guided by longtime Sports Illustrated editor and Professional-in-Residence B.J. Schecter, the College of Communication and the Arts is launching a specialization in sports media. And Seton Hall Law provides guidance for future attorneys who want to work as NFL agents or NHL lawyers.

Sports have never been bigger, so opportunities abound in these disciplines. One Forbes article revealed the sports business could be worth more than $73 billion by 2019 — and that’s just in North America. Tough competition exists for the jobs, but that’s where strong college programs like those at Seton Hall play a role, producing professionals who can excel.

Of course, challenges persist. Print and digital media have undergone dramatic shifts, and thousands of jobs have disappeared. Yet the desire for sports news only grows, creating fresh chances for those who can stand out with their skills or innovations.

Schecter says, “I make no bones about it that it’s going to be difficult, and I tell that to parents at open houses when they ask me, ‘Why should my son or daughter go into journalism or media? Isn’t it dying?’ And I say it’s not. It’s just taking on a different form. We’ve just got to figure out what those opportunities are. And I’ve always believed if you’re the best at what you do and you can stand out from the crowd, you’re going to be really successful.”

The Business of Sports
Interested in sport management? You better be more than a fan. “This is why we push students to pursue a double major,” Grantham says. “Yes, you have the passion for sports, which is important. Because often, you’re going to start at the low end of the employment pyramid, and you are going to have to work up. But the point is, being a fan is not enough. It’s our objective to prepare students in the functional areas of business.”

When Grantham talks to high school students, he discusses the past, when sports franchises measured their worth in millions of dollars and owners hired a buddy to handle marketing or finances. Today, as
contracts and salaries explode upward, franchises and leagues count their money in the billions.

“You have to have lawyers, you have to have business people, you have to have finance majors,” Grantham says. “You’ve got MBAs. In order to run an efficient, effective business in these sports, I want people who will be specialized in their knowledge. That’s why, when I talk to young people, I talk about finding a university where the business school houses the sports management. Today this is not recreation; this is not phys ed; it’s business.”

Throughout his career, Grantham negotiated with powerful figures, including former NBA Commissioner David Stern. Now he brings Stern and others in for talks or symposiums. In the classroom, Grantham confronts issues such as NFL player protests and payment for college athletes.

Grantham also teaches the art of negotiation and dealmaking. “Negotiations are about discussion,” he says. “It’s about face-to-face, it’s about resolving issues, it’s about compromising, it’s about understanding how to collaborate.” He notes that these lessons might not sink in during his students’ junior or senior year, “but it may happen after they get into the workplace.”

Peyton Adams got a taste of the workplace with internships, including one in group sales with the New York Mets, where she learned about ticketing systems and working with honorary first-pitch events. Proving Grantham’s mantra about needing to be more than a fan, Adams — who also majors in economics and marketing — thinks about working on the non-game-day side, where she’d be involved off the actual field of play.

Still, fandom plays a role. During a sports franchise class she took, students followed one team. Adams chose the Philadelphia Eagles, researching how they made money through tickets or TV revenue, analyzing the salary cap, organizational structure and expanding the fan base. Early in class, the students wrote papers that “didn’t quite go in-depth,” Adams says, and Grantham asked for rewrites. “He’s like, ‘I want you guys to really understand the business side of the industry. … Big money will be so essential in your guys’ life, especially if that’s what you decide to go into.’”

A Broad View of Sports Media
Discussing Seton Hall’s nascent sports media program, Schecter says, “Nobody else right now is positioned to build a program like this.”

As the editor and publisher of Baseball America who spent 20 years at Sports Illustrated, Schecter anticipates Seton Hall’s program will help figure out what the next iteration of media will be and how the industry can innovate, including how it can tackle the challenge of prompting people to pay for online content.

“It’s not just writing or broadcasting or podcasting or editing,” Schecter says. “It’s business. … Everything that goes on in college sports — Title IX and pay-for-play, all of that.” The new program will also have crossover with offerings in the School of Diplomacy and International Relations, which is connected to the United Nations. “So it’s interacting with the U.N. and [viewing] sports as a catalyst for peace and prosperity, as the Olympics represents,” he says. “It’s much deeper than traditional sports media.”

During the 2018 spring semester, approval for a sports media minor passed through the University’s academic committees. This media offering would attract students like Elizabeth Swinton ’18. A TV broadcast major who served as sports editor for The Setonian, Swinton’s writing earned awards from organizations like the New Jersey Press Foundation. But her high school stressed math, science and engineering. So at Seton Hall, “I didn’t really know I could write until I joined a newspaper.”

Swinton took an Introduction to Sports Media class and a Sports Reporting class, the latter being “an in-depth dive into sports journalism,” she says. At Seton Hall, Swinton learned “by being immersed in the atmosphere of where I want to end up,” including covering Pirates games where “you’re surrounded by media members of all the different outlets, and you’re in the same environment. You’re walking the same path as them, the same for the NBA Draft or the BIG EAST Tournament.

I learned to understand what it takes to navigate a game or media event. And I backed that up in class with what Professor Schecter would tell us about how to go about interviews, or how to navigate a locker room.”

Even before Seton Hall began programs in sports media for the next generation, the school produced dozens of writers, broadcasters, editors and announcers, some of them joining the biggest names in the business. ESPN broadcaster Bob Ley ’76 is one of the most respected journalists in sports who is also the network’s longest-serving broadcaster. Jim Hunter ’82 has been the Baltimore Orioles’ play-by-play man for radio and TV for two decades. Longtime baseball writer Ed Lucas ’62 was struck by a baseball as a child and went blind, but went on to a remarkable career as a sportswriter and gained fame covering the Yankees.

And then there are recent grads like John Fanta ’17, the do-everything broadcaster during his days at Seton Hall who became host of BIG EAST Shootaround, a weekly online basketball show featured on Fox Sports GO and the conference’s Facebook and Twitter accounts.

Rule of Sports Law
People marvel at the athleticism in sports, celebrate the victories and agonize over the defeats. And, if you’re a lawyer, you savor … contracts? That’s the case with Andrew Richman, J.D. ’16, an attorney with the influential Endeavor agency, where part of his work involves sports-related marketing for several Fortune 500 companies.

“A lot of people want to say that lawyers aren’t creative,” says Richman, who graduated from Central Florida before arriving at Seton Hall Law. “But coming up with solutions to some of these problems is creative, and we’ve got to come up with something that makes both sides work. … I love the business aspect of it also and the negotiation that goes into it. No two deals are the same and everyone has their position. I try to understand the other side, where they’re coming from.”

People who go into sports law are certainly fans, but, as law professor Brian Sheppard explains, “I think most students are savvy enough to know that if you’re really a sports nut, law school is rigorous enough that you probably should have at least a pretty healthy interest in the law, too.”

After all, the law is connected to everything surrounding the games people love. Agents don’t have to have a law degree, but “I think a lot of athletes draw comfort” from having an agent who went to law school, Sheppard says. “It can really make you more marketable.”

To help with the marketing of its own students, Seton Hall takes advantage of nearby New York City in a way few schools can. The law program allows qualified students to work for companies for credit “so long as we get both written assurance and a cooperation agreement with them so that we can be sure the students are getting real legal work and a real learning experience,” Sheppard says. “We want to make sure it’s a true, educational, mentor-mentee type situation.”

Richman experienced that during his two-semester “externship” with Excel Sports Management, where he worked on endorsement deals for athletes such as NBA stars Kemba Walker, Kevin Love and Blake Griffin.

“Law school is good for learning how to think like a lawyer,” Richman says, “but the actual experience and being in the situation is how you become a lawyer. … Learning the experience firsthand and then being able to see the deals and see how they’re put together, see how they’re negotiated and the complexities and the payment structures and the bonus package. There’s no substitute really for the skills that I learned on the job.”

And for students eyeing a sports career, there’s no substitute for a Seton Hall education.

In the Big Leagues