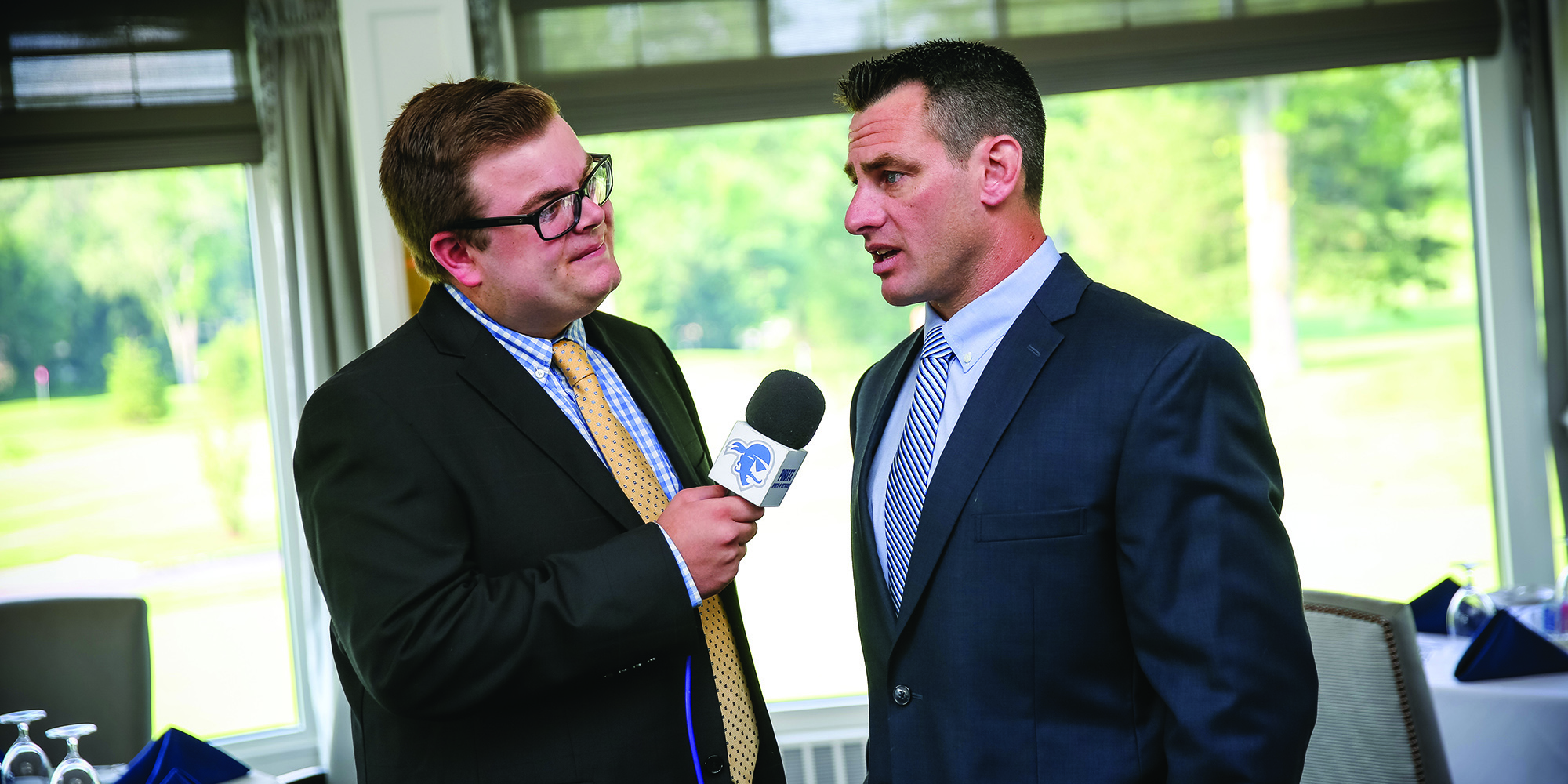 It didn’t take John Fanta long to make an impression on Seton Hall Vice President and Director of Athletics Pat Lyons. As a freshman, Fanta, a broadcasting wunderkind from Westlake, Ohio, sounded so good behind a microphone and proved so determined to master his craft, Lyons says he “used to kid John and say he was going to be a one-and-done.”

One-and-done describes talented basketball players entering the NBA after just one season of college ball. Seeing — and hearing — Fanta’s talent, Lyons figured he could skip the rest of school and enter the broadcasting field.

Fanta, who is now a senior, stuck around, and in three years he has become, in Lyons’s words, “the face and the voice of Seton Hall athletics. He’s as talented a student as I’ve ever come across.”

Fanta is one of the lead play-by-play announcers for Seton Hall athletics through the Pirate Sports Network, a hard-working group of students who produce more than 50 live Pirates sporting events a year. He got his start as a freshman by announcing a women’s soccer game, commentating so well on a sport he knew little about that he earned the attention of many people at the school.

But now he does much more, especially for the athletics department’s website, shupirates.com. Fanta tells the story of Seton Hall sports with the weekly On Deck web show. He broadcasts many home events and works with the athletic communications staff to produce videos and handle media requests. He occasionally travels with the teams, taking trips where he is both a reporter and his own videographer. Among other gigs, he also works as a correspondent for the BIG EAST Digital Network.

There’s no doubt Fanta has given a lot to the school, but to hear him talk, Seton Hall has provided him just as much. Comparing his relationship to the University to a marriage, Fanta says, “They’ve been nothing but great to me in giving me opportunity after opportunity, and in always being there for me. Any question I ask, they have an answer for me, always a helpful hand.”

Even back in Ohio, where he grew up the oldest of four kids, local journalists wrote stories about Fanta’s work ethic and skills as a young broadcaster, noting the traits that later won over the Seton Hall community. Although he remains a diehard fan of Cleveland sports, Fanta wanted to leave Ohio for school and decided upon Seton Hall because of its location in the New York area, the Catholic education, and the people he encountered on his visit and during other interactions.

“They were always saying, ‘We want you here. You can have an immediate opportunity,’” Fanta says.

Fanta seized those chances, not just with Seton Hall athletics, but also through internships with Westwood One Sports Radio, CNBC, and, this summer, with Fox Sports out in Los Angeles. When he enters the broadcasting world full-time, Fanta says, he could see himself in a variety of roles. Maybe he’ll do play-by-play. Or perhaps he’ll quarterback an entire crew as a studio host. He could excel with an insider-type role on the sidelines.

As he’s shown at Seton Hall by doing everything, he possesses the talent to do just about anything. And when he does graduate, Lyons says, “You’re not going to replace him. He’s beyond his years. He’s got the work ethic; he’s got the talent; he’s got the maturity of someone twice his age. This kid is as good as they come.”

But Fanta has one more year as a student, continuing to tell the stories of student-athletes who aren’t just interview subjects, but peers. He understands what athletes go through in classes, and on campus he sees their human side.

“I feel honored to have the role that I have, and that’s why I put in the hours that I do,” he says. “The athletes keep me going, and my pursuit of a career keeps me going. And the fact that Seton Hall has trusted me with this role — that really keeps me rolling.”