YES, Seton Hall is “a home for the mind, heart and the spirit.” And it remains in the hearts and minds of nearly all alumni — in very specific ways.

To find out what alumni love most, the Office of Alumni Relations sent queries out to graduates via Facebook, LinkedIn, and Twitter, hoping to come up with at least 100 favorite things.

Were we surprised by the result!

Here we present just a few of the places, people and things that came up repeatedly. The larger list — including those professors — can be found at blogs.shu.edu/alumni.

“Hazard zet Go Around.” Of course, that’s not what it says on the University seal engraved in granite at the center of the University Green. Yet, “avoiding the seal” while traversing the Green is just a matter of course and a big memory for many alumni. 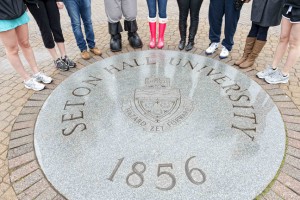 Alumni recall being told about the custom during their first tour of the campus. The student guide would “casually joke” that those who trespass “will not graduate,” says Patrick McCabe ’11, of Westfield, N.J.

Planning to study for a master’s degree, “I still don’t walk on it,” says McCabe, now an admissions counselor in Bayley Hall.
The tradition dates to before 1986, when graduations were still held on campus and some were staged on the Green. The seal, in effect, marks the spot.

Not wishing to compromise their chances of seeing that day for themselves, students steer clear.

“I would never, and I die a little inside every time I see someone walk on it,” says Gina Ianniello, a freshman from Staten Island, N.Y.

One prescription for “reversing the curse” for walking on the seal is to touch the foot of the Pirate statue keeping watch outside the Recreation Center.

“You’ve got to run there within 30 seconds,” says Nicole Longobardo, a senior from Upland, Calif. “Trust me, it’s possible.”

Some also rub the Pirate’s foot for luck.

The practice began shortly after the statue — a gift from alumni — was dedicated, recalls Kara Lennon ’98, who was a member of the swim team.

“Typically, before a home meet, a lot of guys would rub the foot after leaving the rec from a practice,” says Lennon, now the assistant swim coach. “All the other athletes did it too.”

At his post outside Duffy Hall, Father John Daniel Dennehy ’79/M.Div. ’84 is the closest thing to a live version of the bronze Pirate. Ordained a priest in the Archdiocese of Newark in 1981, he has been University chaplain since 2003. 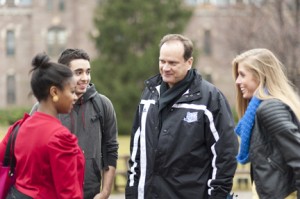 “The biggest thing about him is his presence,” says senior John Barron of Harrington Park, N.J. “He’s always there and he is very approachable.”

Hard to ignore, even.

Most class days, he stands along the busy path during class changes at 9:45 and 11:15 a.m. and 12:45 and 2:15 p.m. His sensitive eyes often shielded by his Oakley sunglasses, he tosses “Good mornings” or “Good afternoons” to everyone making the trek and, if someone wants to stop and chat, he makes time then and there.

Come exam time, he offers candy from a big basket, sometimes with a mild reproof to students and faculty: “Just one!”

“Any day he would be standing outside offering a friendly smile and nice hello were days that just made you feel better,” says Gabriel Rodriguez ’09, of Bel Air, Md. “Father John is without a doubt my favorite memory. Makes me wish I could walk to one more final exam and get a lollipop!”

So often the Chapel of the Immaculate Conception is cited as the heart of Seton Hall. Let us count the ways: a sanctuary for quiet reflection and communal worship — and a place where a lot of students and graduates come to get married. 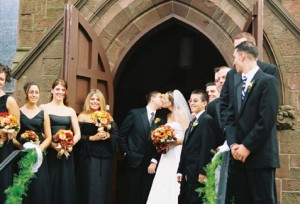 Janine Colasanto ’97 and Marc Colasanto ’96, met at a fraternity party and returned to the campus in 2001 to pronounce their vows — as many do — before Father Paul Holmes ’77, S.T.D., distinguished University professor of servant leadership and chaplain to Phi Kappa Theta, Marc’s fraternity.

“We always knew we were going to get married in the chapel,” Janine says. “There’s no church we could have picked that would have been more meaningful.” The couple now lives in Brick, N.J., with their two daughters.

The chapel has been the setting for almost 150 weddings during the last five years. Alumni also bring back their kids to be baptized — 202 since 2007.

Among them were Emily and Stephanie, the daughters of Jennine and Joseph Arena (both ’93), of Doylestown, Pa.

The sacramental tradition began in her sophomore year, when Jennine celebrated her Confirmation and First Holy Communion in the chapel. That was just three weeks after she met Joe. The couple married in the chapel in 1997. “I always thought of it as my church,” she says.
Fred Szibdat ’84, of West Orange, started attending Sunday Mass there about seven years ago. After meeting his future wife, Gerry, she joined him in his regular pew. When it came time for their wedding on April 30, 2011, no other place had the spiritual significance — or charm.

“It’s hard not to fall in love with the chapel. There is such a specialness to it,” Fred says.

Alumni also recalled the excitement of 1989, the year the Pirates came tantalizingly close to clinching an NCAA championship during P.J. Carlesimo’s tenure as asketball coach.

“I remember going on spring break to South Padre Island as Seton Hall was proceeding through the early stages of the 1989 tournament,” says Mike Leanza ’89/M.B.A. ’91, of Maplewood. “When we were on our way to the vacation, nobody knew who Seton Hall was. But on the way home, after a couple of wins, everyone knew.”

On April 3, the night of the big game against Michigan, “the campus was alive with students outside on the Green and TV trucks and cameras and trucks were all around,” says Cherie Leanza ’90/M.H.A. ’99. “We felt like celebrities. At game time, we packed into the Pirates Cove. We were shoulder-to-shoulder in one room, hundreds of kids, sweating, screaming and holding hands just praying in those final minutes of the game.”

“I won’t mention anything about the officials that night,” Mike says. “It was the worst call in sports history.”

“It didn’t roll our way and I’ll never forget the letdown,” Cherie added. “But the excitement of watching our Pirates on the national stage was a moment in time that truly put Seton Hall on the map.”

A Galleon Room stalwart since 1990, Virginia McKenna’s menu of friends is far more extensive than the variety of tasty sandwiches and other treats she serves with a smile and warm greeting day after day. 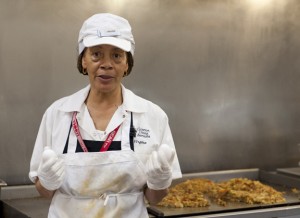 A coal miner’s daughter from West Virginia, McKenna now lives in Newark and rarely misses her 6 a.m. to 2:30 p.m. shift. Her first job was at the dessert counter, but within two years she got the hot spot at the grill. Referring to the cakes and pies she once doled out, “the boss said I was eating more than I was selling — and you can quote me on that,” she laughed.

“She’s like a ray of sunshine,” says freshman Alex Lembo from Staten Island, N.Y. “You’ll be tired, but you get there and she says, ‘How are you, baby?’ and it makes your morning.”

Games of catch or throwing Frisbees. Snoozing or reading beneath a warm sun while sprawled on a blanket, or sitting on a bench. It doesn’t take much fair weather before a crowd begins to converge on the Green. 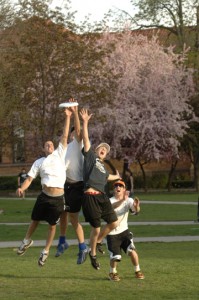 Even before Groundhog Day, two members of the lacrosse team were hurling a ball back and forth. “The Green kind of gives that sense of community — especially when the weather is nice,” says freshman Henri Estanbouli of Hackensack, N.J. “You have this great lawn. Everybody’s out and everything’s budding. It’s just gorgeous.”

“You don’t even have to do real work,” added sophomore Chris Kosmyna of Old Bridge, N.J. “You can just lie on the Green and relax. It’s a great place to spend Saturdays, just hanging out.”

“It was always a place to go to have fun, relax and be with friends,” recalled Danielle Picklo ’08 of Lanoka Harbor, N.J.

“It was nice to walk across and say ‘hi’ to people.”

The Christmastime lighting of the tall evergreen near Presidents Hall is another fond memory.
“Seeing the giant tree lit up on the Green was always something I looked forward to,” says Allyson Pryor ’09, of Neptune, N.J. “It definitely got me — and I’m sure lots of others — in the Christmas spirit. Even better when it snowed.”

Sororities? No way, Ashlie Verano thought as she readied herself for her first semester at Seton Hall. But she was living far from home and family in Los Angeles, and the transition to college was tough. Not too long into her first semester, she was filling out paperwork to transfer, until suite mate Emily McVey suggested she accompany her to a Delta Phi Epsilon event. The transfer papers were never completed. 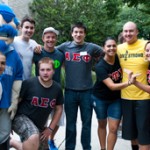 Joining the sorority “completely changed my outlook at Seton Hall,” sophomore Verano says.
Yes, the social opportunities are many, but fraternities and sororities also spearhead a host of philanthropic causes and build a network of contacts that endure long after graduation, says sophomore McVey, of North Arlington, N.J.

“Sisterhood means different things to different people but it’s something you cherish,” says junior Alexandra Kolodziejski, of Poughkeepsie, N.Y., the president of Delta Phi. “You have a connection with all your friends, but this is like a family away from home and the bonds you make with the girls are not just for four years, not for 10. They really are for a lifetime.”

The ties begin forming during the new-member-education period. “You all have that same bond doing the same thing and it forms a basis for brotherhood and friendship,” said sophomore Giovanni Interra, of Pleasantville, N.J. Joining Phi Kappa Theta this year, Interra said, has made him feel even more at home at Seton Hall, especially when alumni return to network with brothers.

So do the very walls. An informal practice had cast and crew members etching their names on the cinder- blocks of the wall behind the “12 o’clock chute” and in the men’s dressing room.
“It’s not a ritual,” McGlone says, yet “there are a lot of names from different productions that go back awhile.”

But the plays were always the thing.

“Working as house manager and assisting in many productions, many of the friendships built in the 1960s still last today,” says Harry Shapiro ’70, of Glendale, Arizona.

“There were so many great shows I participated in — Antigone, Stop the World — I was usually in musicals or under the stage, or in the light board room,” says Joann Melgar ’71, of Abingdon, Va. The education major says she “grew up in dance school and the Theatre-in-the-Round was just the thing to get away from the education folks.”

Before or after passing Father John comes the “wind tunnel,” the overpass created in 1986 when Xavier Hall was built above the sidewalk that connects to the east and west sides of campus. 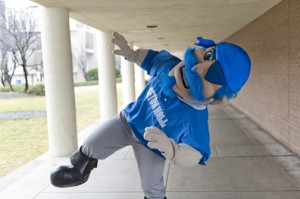 Abandon light and warmth all ye who enter here — and hold on to your hats and umbrellas!
“It’s like 60 degrees out and, you get in there, it’s 30 degrees with a wind speed of 20,000 mph,” says freshman Maggie McNair of Bricktown, N.J. “It’s kind of a pain, but it’s funny at the same time.”

Alumni remember another frozen zone between Marshall and Mooney halls, where a draft was intensified by a passage, since demolished, that linked the second floors of the buildings.

SHARE YOUR FAVORITE THINGS!
What do you love most about Seton Hall? Go to blogs.shu.edu/alumni and let us know.

Catering to student metabolisms that cry for sustenance while other mortals slumber, El Greco remains open so food can be had well into the wee hours. Best of all, it delivers.

“El Greco’s pizza is the best there is and it’s open late,” says freshman Marina McDermott, of White Bear Lake, Minn., who orders from there at least once, if not twice, a week.