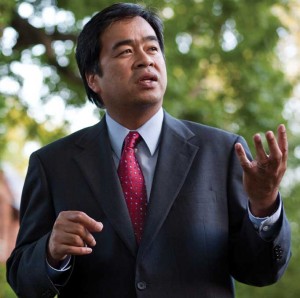 All through the first half of the game at the Prudential Center, Seton Hall had played equal to a team it was supposed to lose to, the University of Connecticut, ranked at that time No.6 in the nation. The courtside student section was dense and loud and Pirate blue. The suite up high where officials and friends of the Stillman School of Business were mingling was more sedate. A. Gabriel Esteban, dressed in the navy blazer and gray slacks that constitute weekend casual for a university president, deftly picked and rolled from one conversation to another. A roar rose from below, and his head instinctively turned toward the game. Jeremy Hazell had hit a three-pointer. Seton Hall was up: 29-25.

When Esteban left his job as provost to become president, his office moved one flight down in Presidents Hall — past the stained glass windows on the grand stairway, and beneath the oil portraits of his clerical predecessors — but his basketball seats moved up, from the student section where he preferred to watch the sport he had played, quite well, in his own youth, to the suite where he was farther than he liked from the action.

“It’s harder to keep track from up here,” he said, and he clapped when Jeff Robinson hit a three-pointer, too: 37-32, Pirates.

Esteban, who is 49, was born and raised in the Philippines, a nation as Catholic and basketball-mad as the university he now leads, and he had a chance to play on his own college team, at the University of the Philippines, where the coach invited him to try out for the varsity as a walk-on. He declined.

“Through my own logic as a youngster, I didn’t want people to think I got into the university because of athletics,” he said. “I always wanted it to be known that I got in for academic reasons, and for no other reason.”

He stuck to intramurals and summer leagues instead, once scoring 44 points in a single game, and absorbing lessons about teamwork and leadership that helped shape his fast-rising academic career.

“I hate to lose, and I took it upon myself if I was playing poorly, if I was having a poor shooting night,” he said. “But the coach always told us that there are a number of ways you can help the team. If you’re not shooting well, then you try to play defense better, or rebound, or pass.”

Seven minutes into the second half of the game against UConn, Seton Hall’s lead had widened to 14 and they were looking like the team that had demolished ninth-ranked Syracuse not quite two weeks earlier. The student section already had the game in the win column. Esteban was more cautious. “I wonder if we can hold on,” he said. “It’s still a long way.”

The eldest son of a doctor, A. Gabriel Esteban grew up expecting to become one, too, as both his brother, a cardiologist, and his sister, an ob/gyn, later did. But as a senior in a Catholic high school in Manila, where his mother taught history, he decided to study math instead. The seven years that awaited him after college on the path to a medical career seemed too long to contemplate. “If I knew then what I know now, that I’d end up getting two master’s and a Ph.D., it would have been quicker for me to become an M.D., I guess,” he said.

He attended Catholic schools until college and was an altar boy, rising in the dark in the days before Christmas to serve the pre-dawn Masses of the Simbang Gabi novena, a nine-day Philippine ritual that ends Christmas Eve. (Last December, he attended a modified Simbang Gabi the University hosted at the Immaculate Conception Chapel, at an evening hour more amenable to undergraduate sleep habits.)

On Saturday evenings as a teenager he usually went to Mass with his basketball teammates. “Before we hung out together, church was always part of it,” he said. “The church and the culture there, it was all just interwoven. There’s not that separation of church and state which you see here.”

He met his wife, Josephine, at the math club at the University of the Philippines, where she was a business economics major. “Where people interested in quantitative methods gathered with their own kind,” she said. “Geeks gathering together.”

Esteban stayed at the university for an M.B.A., and then won a scholarship that took him to Hawaii for his second master’s degree, in Japanese business studies, the subject everybody wanted to learn in the mid-1980s. Back in the Philippines, he worked as an investment analyst for the San Miguel Corporation, the country’s largest food, beverage and packaging company.

He expected to stay in the private sector, but Josephine was offered a chance to earn an M.B.A. with an assistantship at the University of California, Riverside. He won a fellowship, too, to get a doctorate in business administration at the University of California, Irvine. Riverside’s rents were cheaper, so he got the long commute, rising at 5 each morning for the 55-mile trip. Their daughter, Ysabella, was born while they were in Southern California.

Another expectation — that they would return to the Philippines — was upended by the Asian financial crisis of the late 1990s, and a precipitous drop in the value of the job offers awaiting them back home. And so a career in American academia began at the University of Houston-Victoria.

“I did all my crying when he moved us from California to Texas, the type of little town where there are more cows than people,” Josephine Esteban said.

He taught marketing there, but his energy, collegiality and leadership skills caught the attention of administrators, and he soon had another job, too, as head of the university’s new office of institutional research. After four years in Texas he joined Arkansas Tech University as both a professor in the business school and as associate vice president of academic affairs.

By 2001, Esteban was dean of the College of Business at the University of Central Arkansas, and within 18 months he was provost there

“He helped heal a lot of wounds here, lots of ill feelings that had built up between the faculty and the administration,” said Keith Atkinson, an accounting professor who started at Central Arkansas on the same day as Esteban, and later became his associate provost. “He can disagree with you professionally and still like you as a person, and that’s hard for lots of people to do. He will let you hold a different opinion.”

When Esteban left to become Seton Hall’s provost in 2007, Atkinson took his place as interim provost at Central Arkansas. “I had a feeling that it was just a matter of time, that he was going to be president somewhere.”

With six minutes left in the UConn game, Gabriel and Josephine Esteban said their goodbyes in the suite and walked swiftly to the lower level of the Pru – not to make an early escape from the traffic but to have a better view of the final stretch of a game that was quickly slipping away from the Pirates. They stood quietly in the concourse behind the student section, watching as the UConn shots fell cleanly through the hoop, and Seton Hall’s bounced away.

Esteban doesn’t play much himself anymore; golf is his sport now. He has given up taekwondo, too, which he learned in Arkansas with his wife and daughter. “As an administrator you have to learn to defend yourself,” he said. “I used to be able to break four or five boards.”

He had been to the New York metropolitan area only once before coming to Seton Hall, but he acclimated quickly. The barbecue is inferior, but he can get take-out pork kebabs and lumpia, and the traffic is practically Arkansan compared to Manila. Josephine commutes to Manhattan, where she works for a media planning company, and Ysabella is a junior pre-med student at Seton Hall, majoring in biochemistry.

Esteban’s habits on campus are predictable enough that anyone who needs to buttonhole him can usually guess where he’ll be at lunch, with his salad and rotisserie chicken at a corner table in the cafeteria; and also just before the workday starts, at the 8 a.m. Mass at the chapel next door to his office. “Since I have an opportunity to be a daily communicant, I’d feel guilty about not taking advantage of that,” he said.

With 18 seconds to go, the Pirates were behind, but with a chance to tie. Hazell shot from behind the three-point line. Blocked. Final score: 61-59, UConn. Only then did the president turn to leave, as disappointed as any of the crestfallen students all around him.

– Kevin Coyne is a New Jersey writer who teaches at Columbia University’s Graduate School of Journalism.