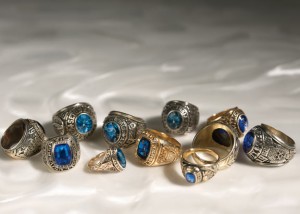 In June 2007, Ed Costello, an information technology manager for the Long Island Rail Road, was finishing up a vacation along the isolated shoreline of Shelter Island, N.Y. Despite teasing by his teenage daughters, he had brought along a new metal detector and had been scanning the area — once home to 18th-century pirates — for “treasure.”

“I’m one of those guys with sunglasses and a metal detector on the beach that everybody laughs at,” he jokes. Over the week, he had found two silver spoons and a lot of change at various beaches, and a pair of silver earrings on his rental property.

On the last Sunday morning of the vacation, he set out at 6 a.m. with a cup of coffee in one hand and his $450 device in the other. He turned on the detector while walking along a path toward the beach near his cottage. The detector’s alarm sounded, and Costello put down his coffee cup. There, 200 feet back from the water’s edge and seven inches down, Costello dug up a Seton Hall ring. Inside were the initials “R.D.S.”

“It was a 1953 ring and it was in such amazingly good shape,” Costello says. “At first, I thought my daughter might have had something to do with it. And when I told my children, they were sure that I was kidding.”

The ring had slipped off the finger of Raymond Smith ’53 back in 1978, while he was swimming off a friend’s boat about a hundred feet offshore. Almost 30 years later, Smith was dumbfounded to take a call from Seton Hall’s Office of Alumni Relations, who wanted to know if — as one of three 1953 graduates with the initials R.D.S. — he had lost his class ring.

But that’s getting ahead of the story.

Reuniting graduates with their lost rings is pretty common for Alumni Relations, according to Dan Nugent ’03, associate director of the group’s regional programs.

A dozen or so get turned in every year.

Cost versus sentimental value
Seton Hall rings can sell today for about $500 to $1,500 each, according to Nugent, whose own class ring was a gift. But their sentimental value to alumni can make them priceless.

“Our house was broken into about two years ago,” says Moran, who runs a 401(k) retirement account consulting business in Kent, Wash. His class ring was taken from a jewelry drawer with other, more expensive items, he says, but the ring “was just irreplaceable.”

The point is you simply cannot buy a 1970 Seton Hall ring.”
A year and a half after the ring was taken, Moran says, “I got a phone call out of the clear blue sky.”

As Moran recalls the conversation, an officer of the King County Sheriff’s Office was on the line with a series of questions:
“Are you Jim Moran?”
“Yes.”
“Did you graduate from Seton Hall University?”
“Yeah.”

“I think we may have your class ring. Can you describe it to me?”
The police had traced him through Matthew Borowick ’89/M.B.A. ‘94, associate vice president for alumni and government relations, who provided Moran’s contact information. “They had broken up this extensive theft ring,” Moran says, and among a cache of stolen items found in a motel room was the ring, which had his name and graduation date inscribed upon it.

A daughter’s quest
By the time John Reynolds ’59 got his ring back after nearly 20 years, he had received a replacement from his family. “They surprised me one birthday and bought me a new ring,” he says. “Now I have two.”
Reynolds thinks the original probably came off in cold weather when his fingers shrank and the ring became loose. But “when one of the alumni people called to tell me, it came right out of the blue. I was overjoyed, because it is such a sentimental thing.”

“I couldn’t believe it, “Reynolds says, giving the patron saint of lost and stolen articles some credit. “St. Anthony took his time.”

Reynolds, a former associate director of development for the University, later received a note from Maria Sandberg of Maywood, N.J., saying that his ring had turned up in her late father’s possessions.

“My father passed away in February 2005; he was 83,” Sandberg says. “He was famous for picking up any stray, shiny object he found on the ground, usually screws, washers, and so on. He also never threw anything away. It’s been very difficult for my mother and me to go through his things; even after three years we’ve barely made a dent.

“One day last year I decided to tackle cleaning out a bowl that was filled with receipts, some almost 10 years old. At the bottom of the bowl was the ring. I have no idea how long he’d had it, or where he’d found it,” she says.

Sandberg says the ring “was in pretty good condition. But there was dirt caked into the inscription, so I cleaned it with an old toothbrush so I could better read the name.” Sandberg emailed Alumni Relations about her find and within days learned who the owner was.

Mailing the ring off, she “enclosed a note to Mr. Reynolds,” she says, “telling him how important it was to me to return the ring to him. My parents were married in 1959, and he graduated that year, so I felt very strongly that my father had found the ring for a reason, and it was my responsibility to do whatever I could to see that it found its way back to him. I got a lovely note back from him.”

Sandberg also understands the emotional attachment of graduation rings. “My father never attended college,” she says. “He graduated from high school in 1940, went to work, and joined the Army not long afterwards. I have his high-school ring, which means the world to me, and I intend to give it to my son when he gets old enough to appreciate it.”

Reynolds, unlike some other alumni, can give you a very accurate dollar value for his rings. The 10-karat one is worth $300 and the 14-karat replacement is valued at $350; he had them appraised. At his class’s 50th reunion next year, he will suggest that class members bequeath their rings — if family members do not want them — to help fund projects at Seton Hall.

A mystery of the deep
As for the ring found on Shelter Island, when Raymond Smith took the call from Alumni Relations, he was amazed to be told it had been found. “We had long given it up for lost,” he says.

The story goes like this: One summer day in 1978, he was invited to go sailing with a friend who had a house and boat on the island.

“We went out on that Saturday morning and spent the whole day,” he says. Coming in that evening, they took a swim in water that Smith remembers “was cold as heck.”

It was then that the ring probably came off.

“I didn’t even realize I lost the ring at that time,” he says. “It was only that night when I took a shower to warm up that I noticed it was gone.”

Smith, who lives in Manchester Center, Vt., said he was the third “R.D.S.” from the Class of 1953 that Alumni Relations called. “The first had passed away and the second had his ring,” Smith was told. The University then got permission to close the circle between Smith and the beachcomber; Smith called Costello immediately “to thank him profusely.”

As to how currents and tides moved the ring so far inland for Costello to find it, Smith has no idea. “It’s a real mystery,” he says.

The two got on famously once they started talking. “It was like I’d known him forever,” Costello says. “He was a nice gentleman. He even sent me a gallon of Vermont maple syrup.” Smith, who is scheduling a luncheon for the two in New York soon, says, “He doesn’t know it, but I’m going to send him another gallon this year.”

Costello is still amazed at how quickly the ring’s owner was located. He found the ring on a Sunday, he says, and by Tuesday he had “popped it in the FedEx to send it up to Vermont.”

It’s all in a day’s work for Alumni Relations, says Dan Nugent. The staff works hard to return errant rings not only because of their value as an expensive piece of jewelry, he explains, but also because of their sentimental value.

“For many people, it’s really a symbol of achievement; something to remind them of all the hard work and preparation for life they received in college.”

And are there more rings being traced by Alumni Relations? “Right now,” Nugent replies, “I am happy to say there are none.” Ω

Thanks to the Monsignor William Noé Field Archives and Special Collections Center for sharing donated rings. And special thanks to the following alums for lending their rings to us for photos: Daniel Schoch ’07, Dan Nugent ’03, Bryan Felt ’97/M.A. ’05, Ann Szipszky ’86, John Saccoman ’60, Kathleen Cardillo ’87/M.P.A. ’89.