AbbVie has recently licensed rights to a monoclonal antibody discovered by Argenx, ARGX-115, paying $20MM up-front and up to $625MM in milestones based on development, approval, and commercial performance. This monoclonal antibody targets a central player in the complex tumor microenvironment – the regulatory T-cell (Treg).

What is the Tumor Microenvironment?

The nature of the tumor microenvironment is critical for therapy of cancer. An inflammatory phenotype is critical for the development and maintenance of an effective anti-cancer immune response. Even if CD8+ T-cells traffic into the tumor microenvironment, their effect can be abrogated by various checkpoints [CTLA-4, PD-(L)1, TIM-3, LAG-3, and CD73], and suppressive immune cells and molecules including MDSC’s (myeloid-derived suppressor cells), Treg cells, TGF-β, nitric oxide, and IDO (indoleamine-2,3-dioxygenase). 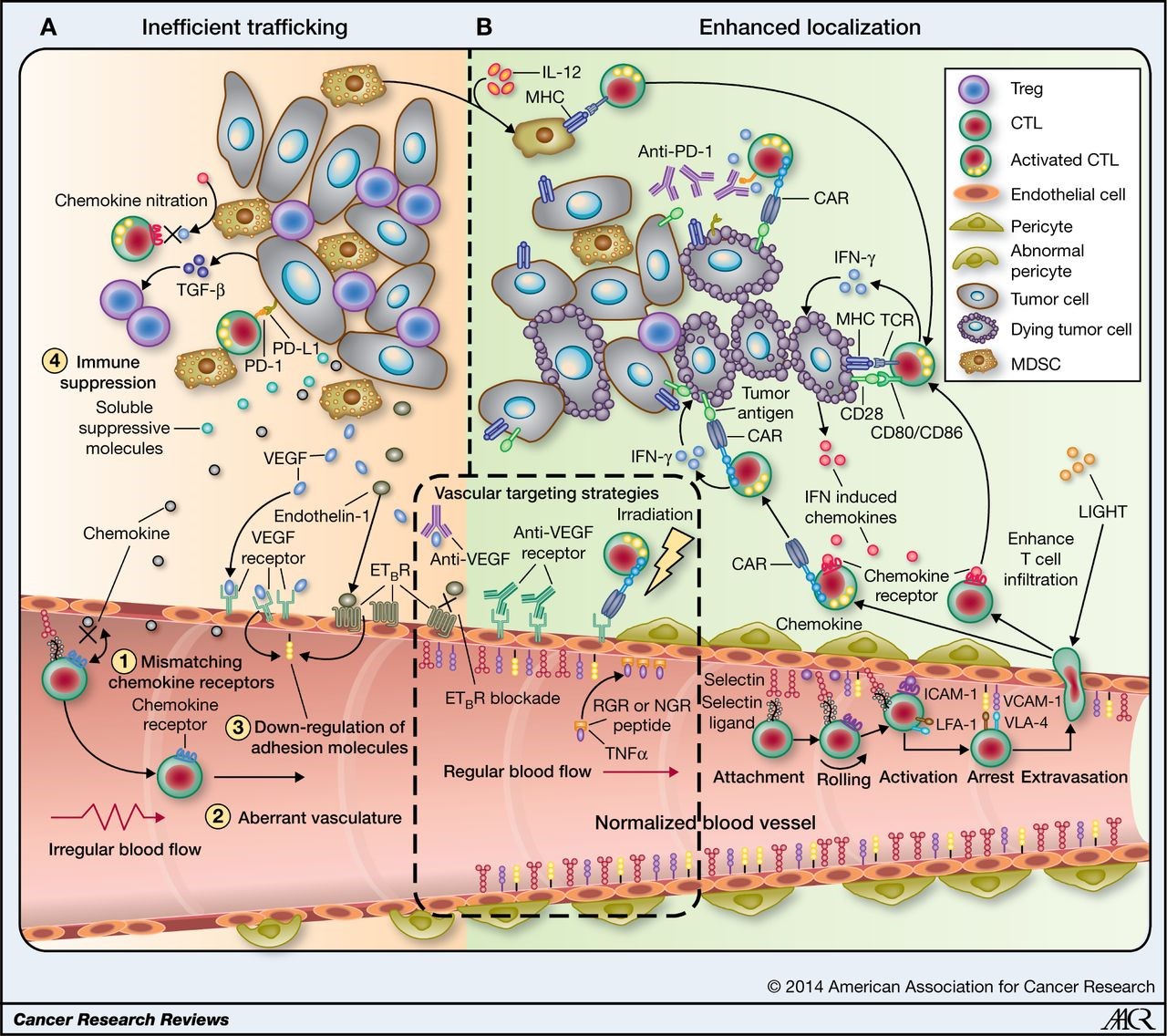 Figure 1. Factors controlling infiltration of T cells into solid tumors. A, inefficient trafficking of CTL into the tumor microenvironment may be due to several factors, including mismatching of chemokine receptors on T cells and tumor-secreted chemokines (1); aberrant vasculature (2); downregulation of adhesion molecules on endothelial cells (3); and tumor immune suppression mechanisms that are mediated by a cohort of suppressor cells, soluble molecules, and checkpoint pathways (4). B, enhanced localization of CTL to the tumor site. A number of strategies have been shown to enhance T-cell infiltration to solid tumors. These include the use of checkpoint inhibitors such as anti–PD-1, genetically engineering CTL or CAR T cells to express certain chemokine receptors, administration of IL12 to enhance antigen-presentation, and delivery of LIGHT. Several strategies for tumor vasculature targeting (boxed area) have also demonstrated great promise for improving T-cell infiltration into the tumor site. http://cancerres.aacrjournals.org/content/74/24/7168

GARP (glycoprotein A repetitions predominant) is a:

Multiple studies have established that GARP plays a role in activating TGF-β by mediating the surface expression and integrin-mediated activation of latent TGF. GARP associates with latency-associated peptide to form an alternative cell-surface platform for latent TGF-β presentation. GARP participates in the regulatory function of activated Tregs, demonstrated by impaired suppressive activity upon GARP silencing and inefficient support by GARP KO T cells for the generation of inducible Tregs. Aberrant overexpression of GARP in the tumor microenvironment also promotes Treg generation and immune escape. 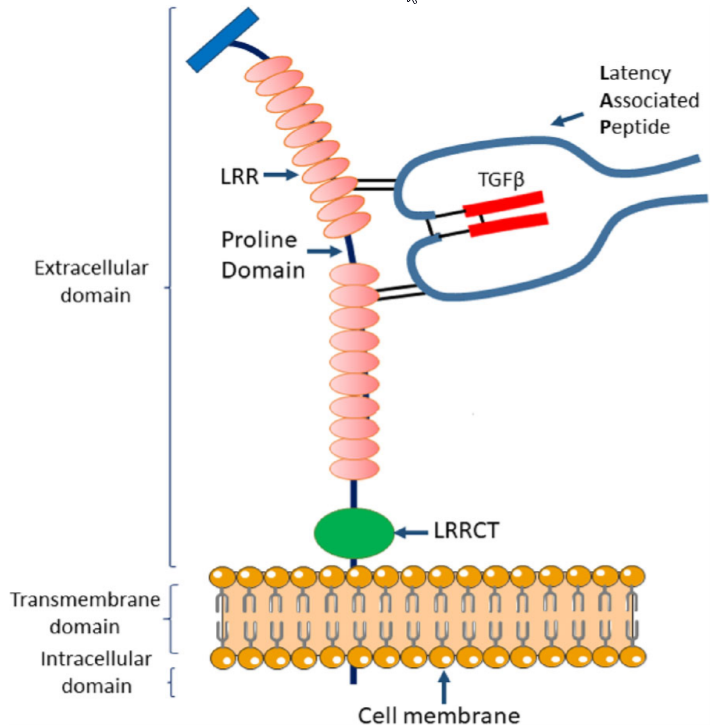 Figure 2. Structure of the membrane-bound GARP-latent TGF-β1 complex. GARP protein is structurally divided into three domains based on its primary sequence: the extracellular domain, the transmembrane domain, and the intracellular domain. The extracellular domain contains two sets of ten LRRs (leucine-rich repeats) divided by a proline-rich domain and one C-terminal LRR (LRRCT). Two conserved Cys residues (Cys-192 and Cys-331) are located on the 7th and 12th LRR, respectively, and are responsible for two disulfide bond formation between GARP and Cys-4 of LAP of latent TGF-β. https://link.springer.com/content/pdf/10.1186%2Fs13045-018-0570-z.pdf

GARP is responsible for TGF-β release by Treg cells in the tumor microenvironment. TGF-β is a potent pro-cancer cytokine:

Figure 3. Timeline of literature on the study of GARP. GARP literature can virtually be divided into three time windows; each emphasizes interests of the field in a specific aspect of GARP function: the first round (green) of research focused on the characterization of the gene and the protein structure; the second round (red) was dedicated to studying the GARP function on Treg cells and tolerance; research during the latest period (light blue) analyzes GARP expression and function on platelets and cancer. https://link.springer.com/content/pdf/10.1186%2Fs13045-018-0570-z.pdf

Monoclonal antibodies to a specific region on GARP have shown to block TGF-β secretion by Treg cells:

Two anti-GARP monoclonal antibodies were generated that block the production of active TGF-b1 by human Tregs. These antibodies recognize a conformational epitope that requires amino acids GARP137–139 within GARP/TGF-b1 complexes. A variety of antibodies recognizing other GARP epitopes did not block active TGF-b1 production by Tregs. In a model of xenogeneic graft-versus-host disease in NSG mice, the blocking antibodies inhibited the immunosuppressive activity of human Tregs. These antibodies may serve as therapeutic tools to boost immune responses to infection or cancer via a mechanism of action distinct from that of currently available immunomodulatory antibodies. Used alone or in combination with tumor vaccines or antibodies targeting the CTLA4 or PD1/PD-L1 pathways, blocking anti-GARP antibodies may improve the efficiency of cancer immunotherapy.

The goal, then, is to turn cold tumors hot by blocking TGF-β release by Treg cells. This will allow trafficking of CD8+ T-cells and dendritic cells into the tumor microenvirnoment that will precipitate and maintain an adaptive antigen-specific immune response. Then, anti-PD(L)1 monoclonal antibodies will block the abrogating effect of PD-L1 expression by tumor cells, which will allow for more complete immune-mediate killing and eradication of tumors.