Cells need to accumulate multiple mutations in order to induce the 10 hallmarks of cancer: 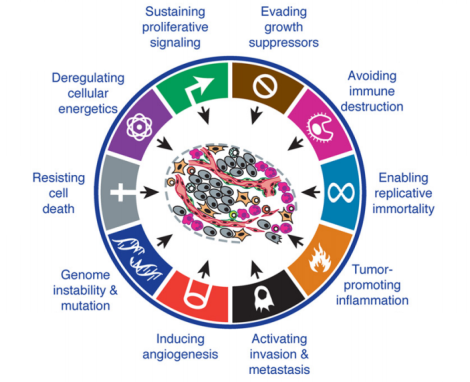 Accumulating the right mutations to induce the cancer phenotype takes a long time – that is why cancer is a disease of the elderly, predominantly. Moreover, cells have many DNA repair mechanisms to correct for mutations; in fact, of the 19 DNA polymerases, only 3 are for DNA replication – DNA pol α (initiation), pol d (lagging strand), and pol e (leading strand synthesis at replication fork and proofreading). Most of the other 16 DNA polymerase are for repair.

Assault with initiators, substances that induce mutation, then. are not enough to induce cancer. Agents that induce high rates of replication, that is promoters, are needed to increase the chances of acquiring the mutations and deletions. Cells appear phenotypically normal despite harboring multiple mutations. With respect to lung cancer, for example, histologically normal epithelium of lungs of current and former smokers demonstrate promoter methylation of p16 (blocker of Cyclin D – CDK4/6, which hypophosphorylates Rb as a requirement for R-point transition), mutated p53 (inducer of apoptosis), and K-ras (inducer of proliferation).

The last several mutations that induce the cancer phenotype occur more quickly than the first few, And this is greatly aided by inflammation, which induces high rates of replication of epithelial cells. Replicative stress leads to mutations and genetic events that result in oncogenic firing or oncogenes and silencing of tumor suppressor genes. The more proliferation, the more replicative stress, therefore, the greater potential for accumulating tumorigenic mutations.

Interleukin-1 (IL-1) is secreted by macrophages, B cells, and dendritic cells. Its function is to promote inflammation by activating B cells, NK cells, and T-cells. It is a pro-inflammatory cytokine that also induces proliferation via induction of NFkB. 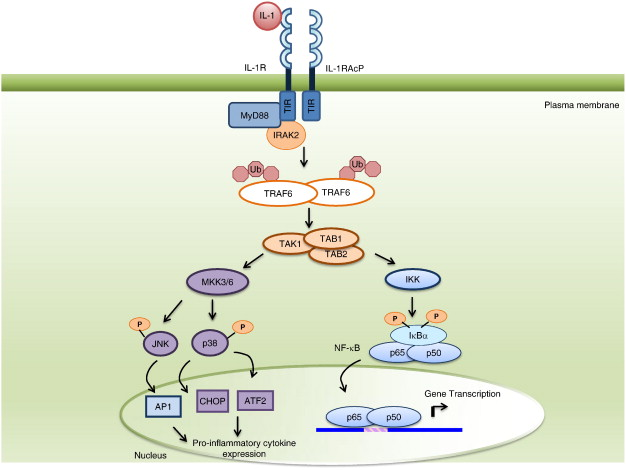 Figure 2. IL-1 signal transduction to NF-κB activation. IL-1 binds to the IL-1R, which associates with the IL-1RAcP at the cell surface, and signals via the TIR adaptor, MyD88, through homotypic TIR-TIR interactions. Subsequently, IL-1R associated kinases (IRAKs) are recruited to the receptor/MyD88 complex. Activated IRAKs promote TNFR-associated factor 6 (TRAF6) polyubiquitination via lysine 63 linkages. The polyubiquitinated TRAF6 interacts with TAK1 in complex with TAB1 and TAB2, ultimately leading to the phosphorylation of IκBα and its dissociation from NF-κB subunits. The phosphorylated IκBα is subsequently ubiquitinated for degradation by the proteasome. The phosphorylated p65/p50 heterodimer translocates to the nucleus, where it binds to response elements in NF-kB-dependent genes and leads to the induction of pro-inflammatory gene expression. In addition, the activation of TAK1/TAB1/TAB2 leads to the phosphorylation and activation of the mitogen-activated protein kinases (MAPKs), JNK and p38. These kinases then phosphorylate and activate transcription factors, thereby inducing the expression of pro-inflammatory genes. Abbreviations: IKK, IκB kinase; IκBα, inhibitor of κB; MyD88, myeloid differentiation factor 88; NF-κB, nuclear factor κB; TAB1, TAK1 binding protein 1; TAB2, TAK1 binding protein 2; TAK1, transforming growth factorβ-activated kinase 1. http://www.sciencedirect.com/science/article/pii/S0167488914001967

This study was undertaken to evaluate whether canakinumab (Ilaris), a selective, high affinity, fully human monoclonal antibody that inhibits IL-1b, could lower the risk of the development of poor cardiovascular outcomes in patients with elevated hish sensitivity c-reactive protein (hsCRP – ≥ 2mg/L), independent of LDL lipid  reduction. The study was quite positive, thereby establishing the benefit of reducing inflammation in patients with cardiovascular disease. 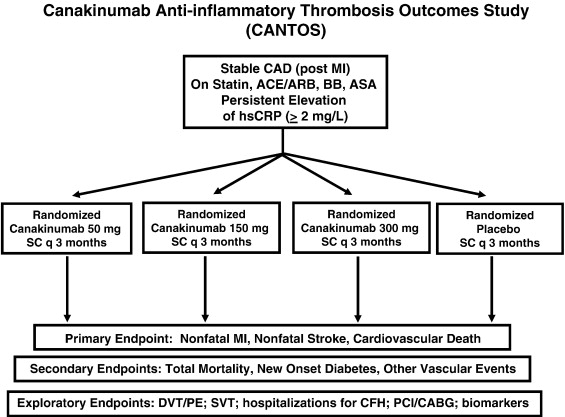 What does this have to do with lung cancer? 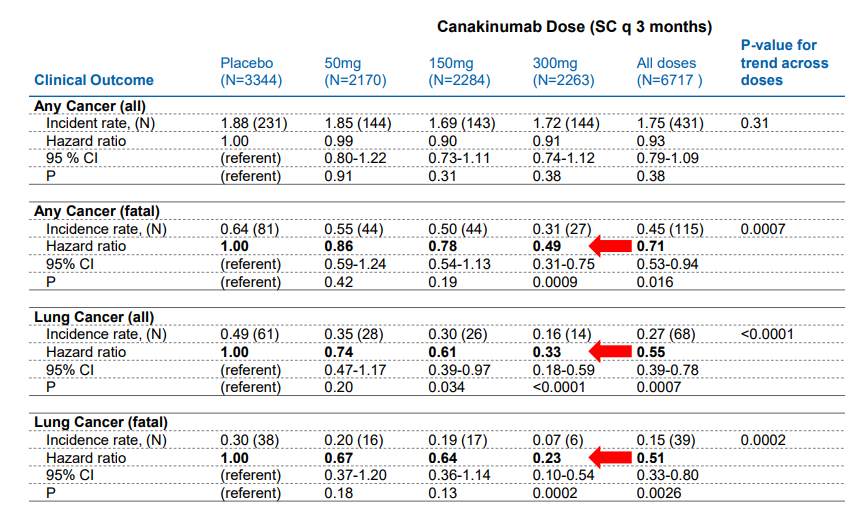 Implications for inflammation and cancer

Canakinumab (quarterly subcutaneous injections for a median 3.7 years) successfully reduced inflammation in the coronary blood vessels and epithelium of the lung. With respect to lung cancer, patients most likely had several mutations in the epithelium of their lungs prior to entering the study (if not undetected frank cancer) , and, because all patients had elevated hsCRP, their lung epithelia were proliferating at an accelerated pace, predisposing them to accumulate additional mutations quickly: 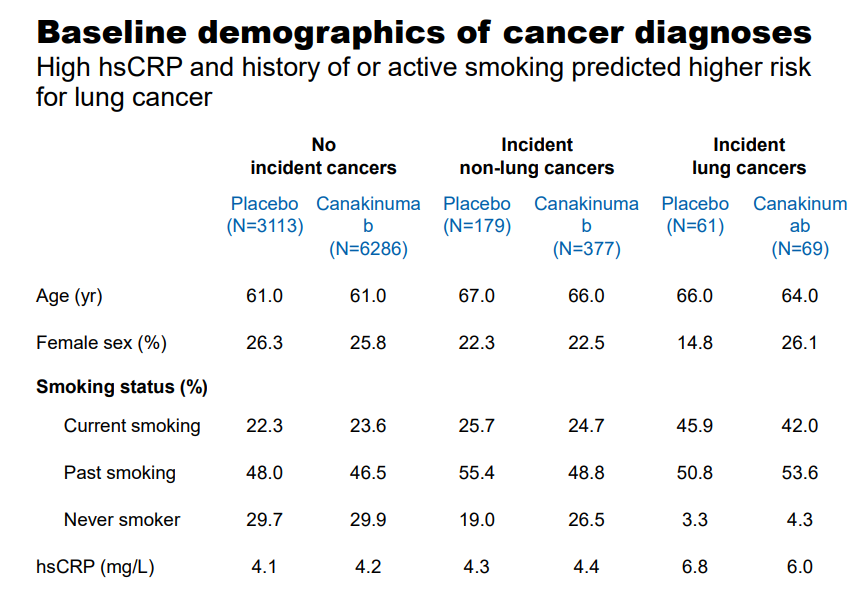 What, exactly, is canakinumab doing? There are several possibilities:

The CANTOS trial is truly groundbreaking. Strategies to reduce inflammation, particularly in patients with elevated hsCRP who at high risk of developing cancer should be further evaluated.