Multiple myeloma (MM) is a cancer of plasma cells in the bone marrow. Plasma cells are B lymphocytes (B-cells) that have been activated to produce immunoglobulins. When plasma cells become cancerous, the produce copious amounts of immunoglobulins and proliferate in the bone marrow, causing crowding-out of other essential hematopoietic cells, leading to reduced numbers of functioning white blood cells (leukopenia leading to immunosuppression), red blood cells (anemia), and megakaryocytes (thrombocytopenia).

Figure 1. Representative pictures of a normal bone marrow and a bone marrow from a patient with MM. Notice the large cells in the myeloma example that make up most of the cells, which are not seen in the tumor sample. http://www.keatslab.org/multiple-myeloma-info

What are BCMA and APRIL?

BCMA (B-Cell Maturation Antigen) is a receptor expressed on mature B-cells – it transduces signals important for cell survival and proliferation by activating the NFkB and MAPK pathways. BCMA is part of the TNF (Tumor Necrosis Factor) Receptor superfamily – its ligand is TNFSF13B, which is also known as APRIL (A Proliferation Inducing Ligand). 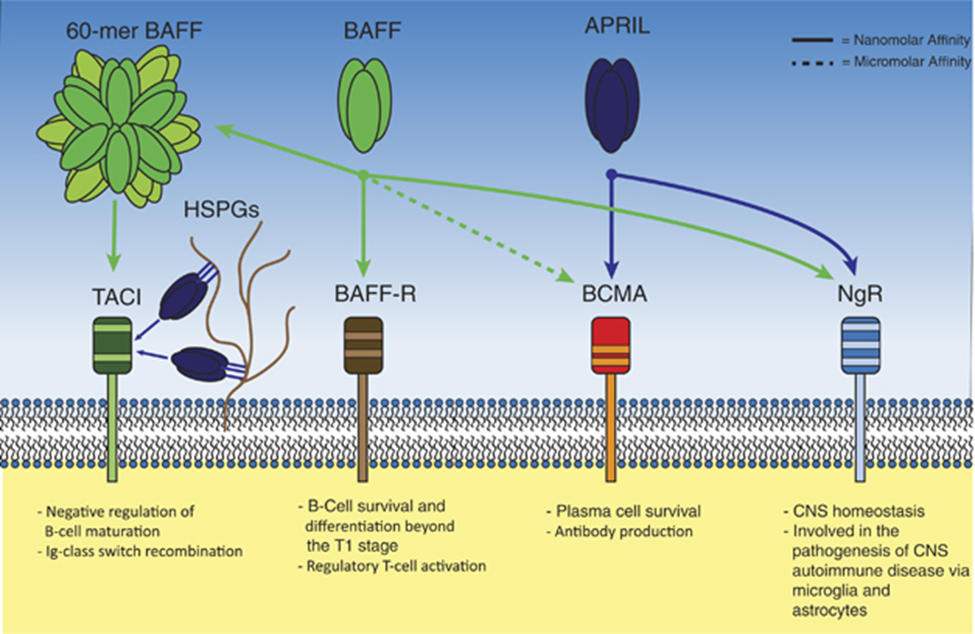 Figure 2. BAFF, APRIL and their receptors. Soluble BAFF and APRIL can activate multiple transmembrane receptors. The BAFF-R is a selective receptor for BAFF, and is important in early B-cell homeostasis and regulatory T-cell function. BCMA binds APRIL with nanomolar affinity and BAFF with micromolar affinity. BCMA expression is restricted to antibody-producing cells and BCMA function is paramount for plasma-cell longevity. The NgR binds both APRIL and BAFF and is important for CNS homeostasis and plays a role in CNS autoimmune diseases. TACI can bind 60-mer BAFF and heparan sulphate proteoglycan-bound APRIL with nanomolar affinity, and is implicated as negative regulator of B-cell maturation. Additionally, TACI is important for Ig-class switch recombination in the germinal center. https://www.researchgate.net/figure/273787714_fig3_Figure-2-BAFF-APRIL-and-their-receptors-Soluble-BAFF-and-APRIL-can-activate-multiple

Aduro has developed hAPRIL.01A (BION-1301), a monoclonal antibody that binds to APRIL to disrupt its binding to BCMA.

The MAb blocked CLL survival and inhibited mouse B1 hyperplasia and IgA production in vivo (Guadagnoli et al., 2011). APRIL is produced by cells in the bone marrow niche, including myeloid-derived cells, osteoclasts and plasmacytoid dendritic cells. APRIL critically triggers BCMA in vitro and in vivo to drive proliferation and survival of human MM (Tai et al., 2016). Importantly, APRIL induces resistance to lenalidomide, bortezomib and other standard-of-care drugs for multiple myeloma. Furthermore, APRIL drives expression of PD-L1, IL-10, VEGF and TGFβ forcing an immunosuppressive phenotype on BCMA+ cells. As MM and B-cell survival, resistance to treatment and the immunosuppressive phenotype can be blocked by neutralizing APRIL (Tai et al., 2016), development of an antibody blocking APRIL provides a novel avenue for the treatment of MM and possibly CLL.

The company plans to initiate a Phase 1 study of patients with multiple myeloma in 2017. Given that APRIL induces resistance to lenalidomide, bortezomib and other standard-of-care drugs and drives expression of PD-L1, IL-10, VEGF and TGFβ forcing an immunosuppressive phenotype, it is appropriate to consider use of BION-1301 in combination with standard of care therapies and PD-(L)1 checkpoint inhibitors.

In patients with rectal cancer, elevated serum levels of APRIL have been shown to portend a poor prognosis. In addition to multiple myeloma, anti-APRIL treatment may be useful in refractory CLL (chronic lymphocytic leukemia) and rectal cancer. 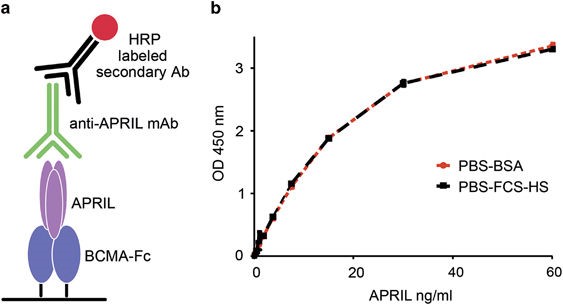 Figure 3. hAPRIL.133 reliably detects human APRIL in the presence of human serum. (a) Schematic representation of the ELISA setup. We coated 96-wells plates with BCMA-Fc, and detected recombinant APRIL with the newly derived anti-APRIL mAbs followed by an horseradish peroxidase-labeled anti-mouse IgG. (b) The selected hAPRIL.133 mAb detects APRIL reliably independent of whether it was serially diluted in PBS–BSA or in human serum. Two standard curves were generated by serial dilutions of human APRIL in PBS+fetal calf serum 10%+human serum 20%(PBS–fetal calf serum–HS) or in PBS+BSA 1% (PBS–BSA). http://www.nature.com/oncsis/journal/v4/n1/fig_tab/oncsis201450f1.html#figure-title