Glioblastoma is the most aggressive form of malignant glioma; median survival from time of diagnosis is typically 12-15 months. OLIG2 is a key transcription factor that maintains the stemness of the glial stem cells, and drives proliferation and invasion and recurrent tumor growth. Inhibitors of this pathway are therefore of interest as potential treatments for this unmet need. Indeed, glioma stem cells (GSC’s) have a high ability to self-renew, thereby leading to recurrences of glioblastoma. Gene expression studies in GSC’s suggest that OLIG-2 is the most specific GSC marker.

What is the cell of origin of glioblastoma?

There is great debate regarding which cells give rise to gliomas, including glioblastoma. This is because of their high degree of plasticity – cells of origin can take on characteristics of other cells after malignant transformation, thereby masking the lineage from which they emanate. In addition, because glioblastoma aggressively infiltrates and intermingles with many other cell types, induction of proliferation of cells in the tumor microenvironment can mask the origin of the malignant cell:

In addition to the issue of cellular plasticity, the interpretation of the complex cellular composition of gliomas should also take into account the fact that these tumors are diffusely infiltrative. Therefore, neoplastic cells intermingle with non-neoplastic brain cells, including reactive and entrapped astrocytes, oligodendrocytes, neurons, microglia and blood vessels. While the heterogeneous mass of proliferating cells could arise from the clonal evolution of a transformed cell of origin, recent animal model studies have revealed that gliomas can recruit non-neoplastic glia progenitors to proliferate extensively, which in turn acquire their own transforming genetic alterations. The extent to which recruitment and transformation of bystander cells contributes to growth and progression in human disease still awaits further investigation. Nevertheless, such an intriguing prospect has important implications with regards to the question of glioma cellular origin. 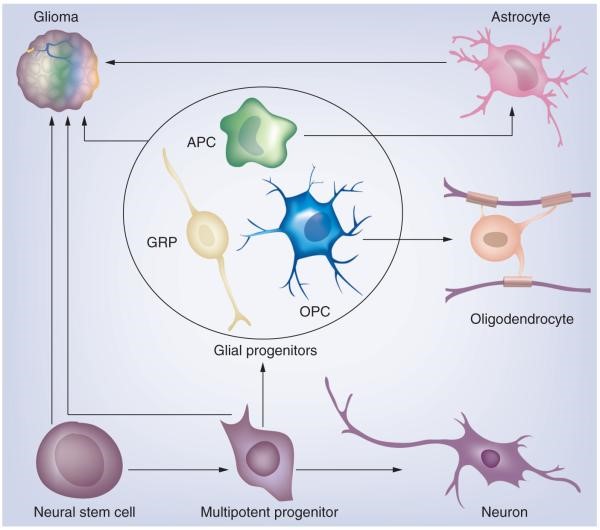 Figure 1. Neural stem cells and multipotent progenitors in the subventricular zone can give rise to cells of neuronal and glial lineage. Glial progenitors, which include a heterogeneous population of immature cycling cells, can give rise to astrocytes and oligodendrocytes. Glioma is a heterogeneous disease that can be divided into distinct subtypes. We propose that the different glioma subtypes arise from different cells of origin.
APC: Astrocyte progenitor cell; GRP: Glial-restricted progenitor; OPC: Oligodendrocyte progenitor cell. https://www.ncbi.nlm.nih.gov/pmc/articles/PMC3368274/

‘‘Proneural’’ tumors transcriptionally resemble oligodendrocyte precursor cells (OPCs) and correlate with high levels of PDGFRA amplification, while the transcriptional profiles of ‘‘classical’’ tumors more closely resemble astrocytes, and these tumors typically carry EGFR amplifications and/or mutations. More recently, clonal and single-cell analyses have indicated that a single tumor or even a single cell may be categorized as multiple subclasses, enabling phenotypic plasticity of the bulk tumor but potentially complicating the use of single-agent targeted therapies.

Further, studies comparing initial resections with recurrent tumors after chemotherapy and radiation suggest that at least some recurrences display markedly different genomic features from the initial sample, including a change in genomic subclass.

Following radiation therapy of proneural glioblastoma, a switch to mesenchymal phenotype is seen. OLIG-2 is required for classic glioblastomas (driven by EGFR) to switch phenotyope. This raises the possibility of whether therapies intended to inhibit OLIG2 activity should be administered chronically, with the goal of maintaining a classical phenotype during treatment with agents targeting EGFR or other receptor tyrosine kinases. 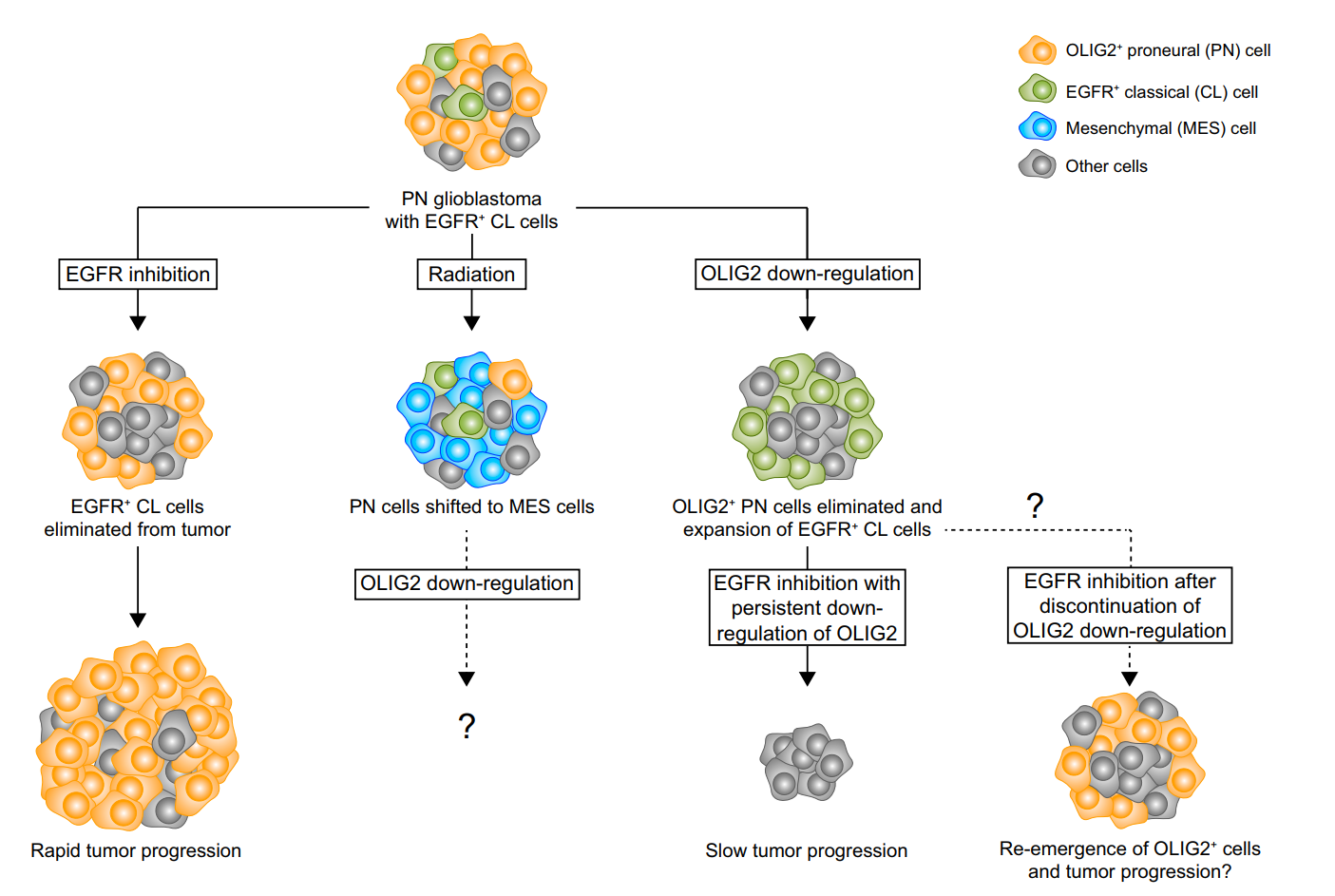 Figure 2. Hypothetical Patterns of Proneural Tumor Growth in Patients Receiving Targeted Treatments An initial tumor is composed predominantly of tumor cells that would be classified as proneural (orange), but it contains some EGFR-expressing classical cells (green). If initially exposed to an EGFR inhibitor, this tumor would likely continue to grow, although the minority of EGFR-expressing cells could be eliminated (left arm). Introduction of an OLIG2 inhibitor (right arm) could shift the overall phenotype to an EGFR-dependent phenotype, thus enhancing the inhibition of tumor growth in the presence of an EGFR inhibitor (right arm). However, the potential effects of irradiation prior to OLIG2 inhibition (center arm) and the duration of OLIG2 inhibition (far right branch) remain to be investigated. http://www.cell.com/cancer-cell/pdf/S1535-6108(16)30165-9.pdf

OLIG2 is a key transcription factor that maintains the stemness of the glial stem cells, and drives proliferation and invasion and recurrent tumor growth. Inhibitors of this pathway are therefore of interest as potential treatments for this unmet need. Indeed, glioma stem cells (GSC’s) have a high ability to self-renew, thereby leading to recurrences of glioblastoma. Gene expression studies in GSC’s suggest that OLIG-2 is the most specific GSC marker.

OLIG-2 inhibition in the treatment of glioblastoma

CT-179 will be entering the clinic in the first half oh 2018.  It was granted Orphan Drug Designation in August 2017. Typically, Olig2 is not active in normal brain tissue. However, it is expressed in all diffuse gliomas and nearly 100% of the glioma CSCs, which makes it a highly attractive drug target. It has been shown to significantly prolong survival in relevant animal models in combination with temozolomide and radiation therapy. It is a highly potent inhibitor of Olig2 that selectively spares normal cells and significantly reduces cancer cell migration into normal brain tissue in animal models. The drug is orally bioavailable, readily crosses the blood-brain barrier, and achieves very high concentrations in the brain. CT-179 is being developed by Curtana Pharmaceuticals and represents a novel agent which selectively targets glioma CSCs in preclinical studies with great potential as an adjunctive therapy in the treatment of GBM and other gliomas.

CT-179 is a small molecule inhibitor that was initially designed to prevent homodimerization of Olig2. CT-179 is highly cytotoxic to OLIG2 expressing GBM cells with a high therapeutic index for non-OLIG2 expressing cell types. This inhibitor demonstrates functional inhibition of the OLIG2 pathway through specific reduction in nuclear Olig2 protein levels in treated cells. A cell pathway analysis indicates that CT-179 impacts GBM proliferation through cell cycle arrest and induction of apoptosis. Secondarily an immunosuppression mechanism-of-action may also be relevant. CT-179 penetrates the CNS to attain high brain concentrations at levels far in excess of its cytotoxicity to GBM cells. Efficacy studies reveal dose dependent reductions of tumor growth which is enhanced with radiotherapy. CT-179 demonstrates impressive extension of survival in orthotopic human PDX GBM. Safety studies indicate that there is a large therapeutic window. The compound has a long half-life, low metabolism and has excellent formulation properties and PK supporting once per day oral dosing. CT-179 show promise as both a cytotoxic agent and as potential radiosensitizer for use in the treatment of GBM.

The effect of CT-179 on orthotopic xenografts derived from 8 patients with pediatric glioblastoma was evaluated:

Oligodendrocyte Lineage Transcription Factor 2 (OLIG2) is pro-mitotic and highly expressed in gliomas. We evaluated in vitro and in vivo efficacy of CT-179, an OLIG2 chemical inhibitor, alone and combined with radiation in pediatric glioblastoma (pGBM). METHODS: Cells from 8-patient tumor-derived orthotopic xenograft pGBM models with elevated OLIG2 expression were treated with CT-179 (0-10 µM) in both serum-based and serum-free media (favoring enrichment of tumor stem cells). Cell viability was measured 5 times over 2 weeks. Tumor cells were then exposed to varying doses of CT-179 (0-1 µM) and radiation (0-8 Gy). Inhibition of cell growth and colony-forming efficiency were determined with high-throughput imaging. Finally, 105 pGBM cells were orthotopically-implanted into mice. After 2 weeks, 4 weeks of treatment was initiated with vehicle, focal radiation (2 Gy/day, 5 days), CT-179 (15 mg/kg, gavage), or radiation plus CT-179. Drug concentration was examined in blood, normal brain, and tumor. RESULTS: CT-179 inhibited cell viability in both time- and dose-dependent manners in all 8 pGBM tumors in both media (IC50 0.03-10 µM). Radiation potentiated the effects of CT-179 at low to moderate drug doses (0.03-1 µM). In vivo treatment in one pGBM xenograft model has been completed. No animals died during treatment from drug-related toxicity. Survival analysis is ongoing. CONCLUSION: The OLIG2 inhibitor CT-179 demonstrated in vitro efficacy against numerous pGBM samples. CT-179 is well tolerated in vivo. Significant extension of animal survival is anticipated. Our data suggest that OLIG2 inhibition may be an effective strategy for future pGBM clinical trials.