We previously discussed another combination of an engineered virus combined with a checkpoint inhibitor – see DNAtrix and Merck Phase II Collaboration of Oncolytic Virus + Keytruda for Glioblastoma.

The NG-348 virus uses PsiOxus’ proprietary Tumor-Specific Immuno-gene Therapy (T-SIGn) platform to “arm” adenovirus with two additional immuno-therapeutic transgenes: (1) full-length human CD80 and (2) a membrane-anchored antibody fragment specific for the T-cell receptor CD3 protein. The expression of these genes is controlled by endogenous virus major late promotor, which only allows expression of the proteins on the surface of virus-infected tumor cells, and prevents off-target expression in healthy cells.

The virus (ColoAd1) was selected through a process of natural selection from a large randomly-created adenovirus chimeric library. The viruses were tested against normal cells and cancer cells – selection was based on oncolytic potency against cancer cells potential to infect normal cells. Step one was directed selection for cancer cell killing; step two was screening against normal cells. ColoAd1 is 1200 times more potent in killing cancer cells than non-cancer cells. Following intravenous administration, because it is a large particle, it does not permeate normal endothelium, rather, accumulates in tumors with leaky vasculature. It replicates in cancer cells and induces non-apoptotic cell death; shed viral particles infect other cancer cells. Necrolytic cell death liberates tumor antigens that can trigger a specific adaptive immune response. 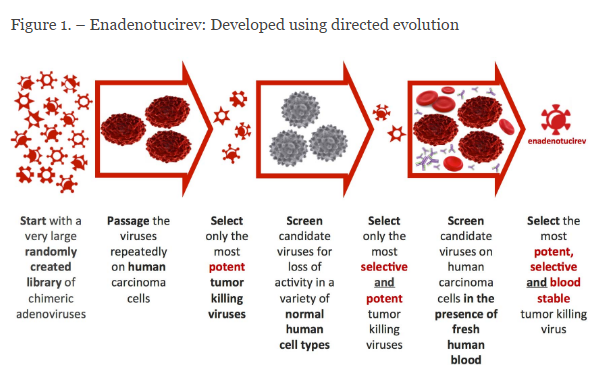 What is the importance of CD80 and CD3 accessory molecules?

In addition to its direct oncolytic action, the virus also induces the expression of CD80 on the surface of infected cancer cells, thereby enhancing interaction with T-cells by binding with CD28, thereby activating T-cells. The CD3 binding motif that is expressed on the infected cancer cells enables the cancer cell to engage the T-cell receptor (TCR) and precipitate a more vigorous T-cell response by stimulating the accessory molecule.

CD3 is a multimeric protein complex, known historically as the T3 complex, and is composed of four distinct polypeptide chains; epsilon (ε), gamma (γ), delta (δ) and zeta (ζ), that assemble and function as three pairs of dimers (εγ, εδ, ζζ). The CD3 complex serves as a T cell co-receptor that associates noncovalently with the T cell receptor (TCR). 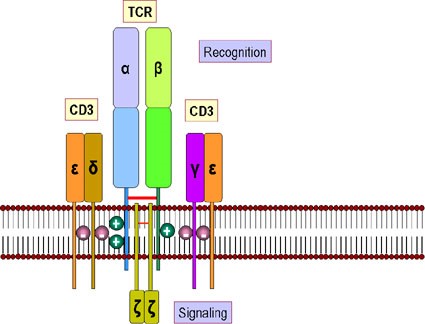 Figure 2. T-cell receptor and CD3 accessory molecule. The receptor for antigens on the T cell surface comprises eight proteins. (a) Two disulfide-bonded chains of the T cell receptor which form a heterodimer. These recognize peptides associated with MHC molecules. (b) Four chains, collectively termed CD3, that associate with the T cell receptor dimer and participate in its transport to the surface of the cell. The CD3 complex together with the zeta chains, which form a homodimer, transduce the signal after antigen has bound http://www.microbiologybook.org/bowers/mhc.htm

What is the rationale for combining enadenotucirev and nivolumab?

Figure 3. T-cell activation by three signals. The first involves T-cell receptor (TCR) triggering by donor antigen on APCs (antigen presenting cells). The second signal or “costimulation signal” is delivered when B7-1/CD80 and B7-2/CD86 on the surface of APCs engage CD28 on T-cells. These two signals activate three transduction pathways (the Nuclear Factor-κB or Nf-κB pathway, the mitogen-activated protein (MAP) kinase pathway and the calcium-calcineurin pathway) that result in the production of numerous factors, including interleukin-2 (IL-2), the α–chain of its receptor, CD25, and the CD40 Ligand. CD40 is expressed on all APCs (including B cells) and its ligand (CD40L or CD154) is on activated CD4+ T-cells and on a subset of CD8+ T-cells and NK cells. Stimulation of CD40 on APC by CD40L triggers important signals for antibody production by B cells and strongly induces B7 and Major Histocompatibility Complex (MHC) expression on APCs. IL-2 binding to its receptor activates the mTOR (“target of rapamycin”) pathway – the third signal – resulting in T-cell clonal proliferation. https://openi.nlm.nih.gov/detailedresult.php?img=PMC2721321_btt-1-203f1&req=4 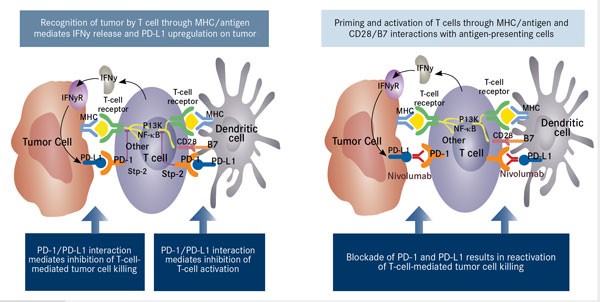