Leap Therapeutics, an immuno-oncology company, recently reversed merge with Macrocure to become a publicly traded company, and received an investment of $10MM from current investors in order to advance two antibodies –  DKN-01, a humanized monoclonal antibody targeting the Dickkopf-1 (DKK1) protein on cancer cells, and TRX518, a humanized GITR agonist that augments T-cell responses against tumors.

DKK1 encodes a protein that is a member of the dickkopf family. It is a secreted protein with two cysteine rich regions and is involved in embryonic development through its inhibition of the WNT signaling pathway. Elevated levels of DKK1 in bone marrow plasma and peripheral blood is associated with the presence of osteolytic bone lesions in patients with multiple myeloma. Among its related pathways are Wnt signaling pathway (KEGG) and Wnt / Hedgehog / Notch. 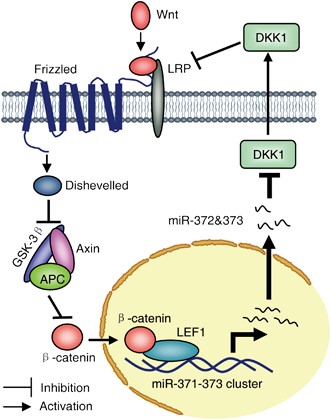 DKK1 is not expressed in most normal tissues but is expressed by tumor cells from almost all patients with myeloma. The selectivity of DKK1 expression for multiple myeloma makes it an ideal target for immunotherapy approaches because off target toxicities should be minimal.

Dickkopf-1 (DKK1) is a secreted protein that specifically inhibits Wnt/β-catenin signaling by interacting with the coreceptor Lrp-6. Previous studies have shown that the DKK1 gene has a restricted expression in placenta and mesenchymal stem cells (MSCs) only, not in other normal tissues. Recent studies have demonstrated that DKK1 in patients with myeloma is associated with the presence of lytic bone lesions. Immunohistochemical analysis of bone marrow biopsy specimens shows that only myeloma cells contain detectable DKK1.

In addition to multiple myeloma, Dickkopf-1 expression was confirmed in several cancer cell lines derived from breast and other common cancers. Dickkopf-1 protein secretion was documented in breast, prostate and lung cancer lines, but was negligible in melanoma. Analysis of DKK1 expression in human cancer specimens revealed DKK1 expression in breast (21 out of 73), lung (11 out of 23) and kidney cancers (six out of 20). Interestingly, DKK1 was preferentially expressed in estrogen and progesterone receptor-negative tumours (ER−/PR−; P=0.005) and in tumours from women with a family history of breast cancer (P=0.024). Importantly, DKK1 protein production was confirmed in multiple breast cancer specimens that were positive by RT–PCR. This work establishes DKK1 as a potential prognostic and diagnostic marker for cohorts of breast cancer patients with poor prognosis. Dickkopf-1 may also become a relevant candidate target for immunotherapy of different cancers.

Leap is developing DKN-01 (D) for use in patients with esophageal EC) or gastro-esophageal junction (GEJ) tumors that express DKK1. A clinical study of DKN-01 in combination with paclitaxel (P) is ongoing:

To date, 22 pts were enrolled: 9 in Part A (dose escalation phase), and 13 in Part B (does confirmation phase); 16 male; 6 female; median age: 63 years; 18 White, 3 Black; 1 other. 21 pts were eligible per ITT (intent to treat analysis): 11 pts had a diagnosis of EC [8 squamous (ESCC), 3 adenocarcinoma (AC)] and 10 pts with GEJ [10 AC]. Median number of prior therapies was 2 (range 1, 7). Majority (~90%) of treatment emergent adverse events (TEAEs) were Grade 1/2. ≥ Grade 3 TEAE in > 1 pt included neutropenia (4 pts), and dysphagia, peripheral neuropathy, hypophosphatemia and pneumonia (2 pts each). Overall, 68% had TEAE related to D. D-related TEAE occurring in > 2 pts included fatigue (8 pts), and decreased appetite, diarrhea, nausea and peripheral neuropathy (3 pts each). There were only 6 D-related TEAE ≥ Grade 3 [fatigue, peripheral neuropathy, hypophosphatemia, type 2 diabetes mellitus, anemia, and neutropenia (1 pt each)] and no D related SAEs.

Of 20 pts evaluable for response, 7 pts had a partial response (3 had prior P), 9 pts had stable disease, 4 had PD; 14/20 patients had reduction of tumor volume. Median progression-free survival was 17.7 weeks (range 2.9, 40.7) and median OS was 28.9 weeks (range 2.0, 75.1). At the time of this cutoff, 4 patients remain on therapy, 2 of which are ongoing responders (months 7 and 10). Conclusions: The combination of D + P has preliminarily demonstrated enhanced clinical activity over expected efficacy with P alone and is well-tolerated; to date the addition of D has not altered the known P safety profile. Further investigation of D is ongoing as both a combination and a monotherapy. 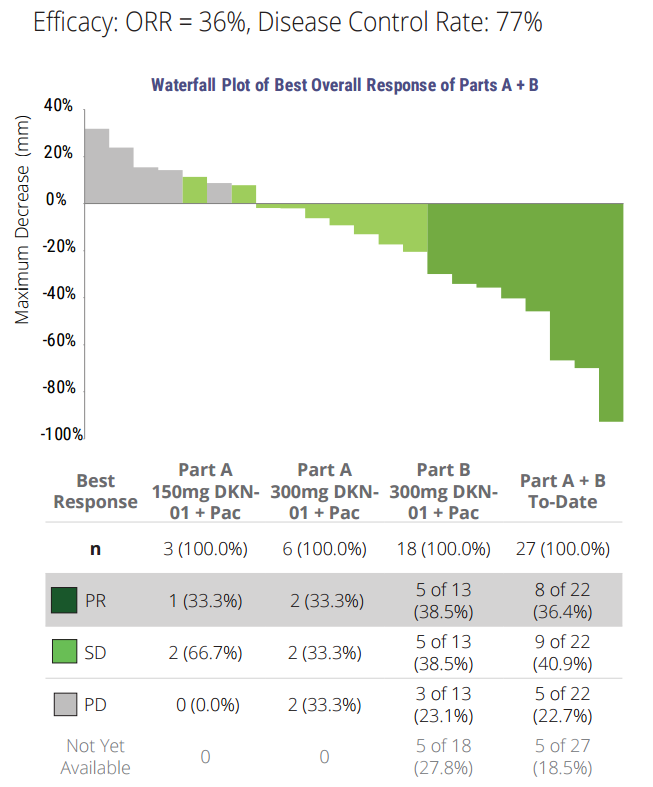 TRX518 is an agonist monoclonal antibody that stimulates the GITR (glucocorticoid-induced TNFR-related protein) is a receptor having low basal expression on naïve murine CD4+ and CD8 T+ cells, and very low expression on human T cells. Upon activation, naïve T cells and Tregs upregulate GITR 24–72 h after an initial stimulus, with expression lasting several days.. This delayed expression pattern on effector T cells (Teff) suggests that GITR does not play a predominant role in early T cell priming, but rather exerts its effects at later time points. GITR ligand (GITR-L) is expressed at low levels by antigen-presenting cells such as macrophages, dendritic cells (DCs), and B cells and is upregulated upon activation. 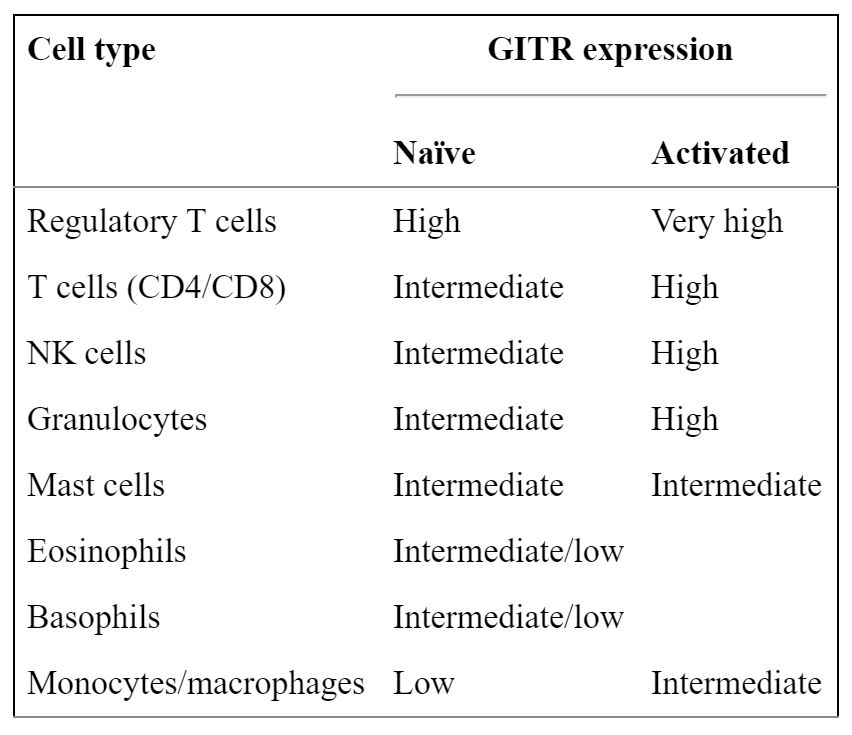 GITR is expressed on many immune cell types and is often upregulated upon activation. http://www.ncbi.nlm.nih.gov/pmc/articles/PMC3413251/

Signaling downstream of GITR results in the activation of NF-κB and along with members of the MAPK pathway including p38, JNK and ERK. The downstream events in turn are believed to enhance T cell survival by upregulating IL-2Rα, IL-2 and IFNγ. 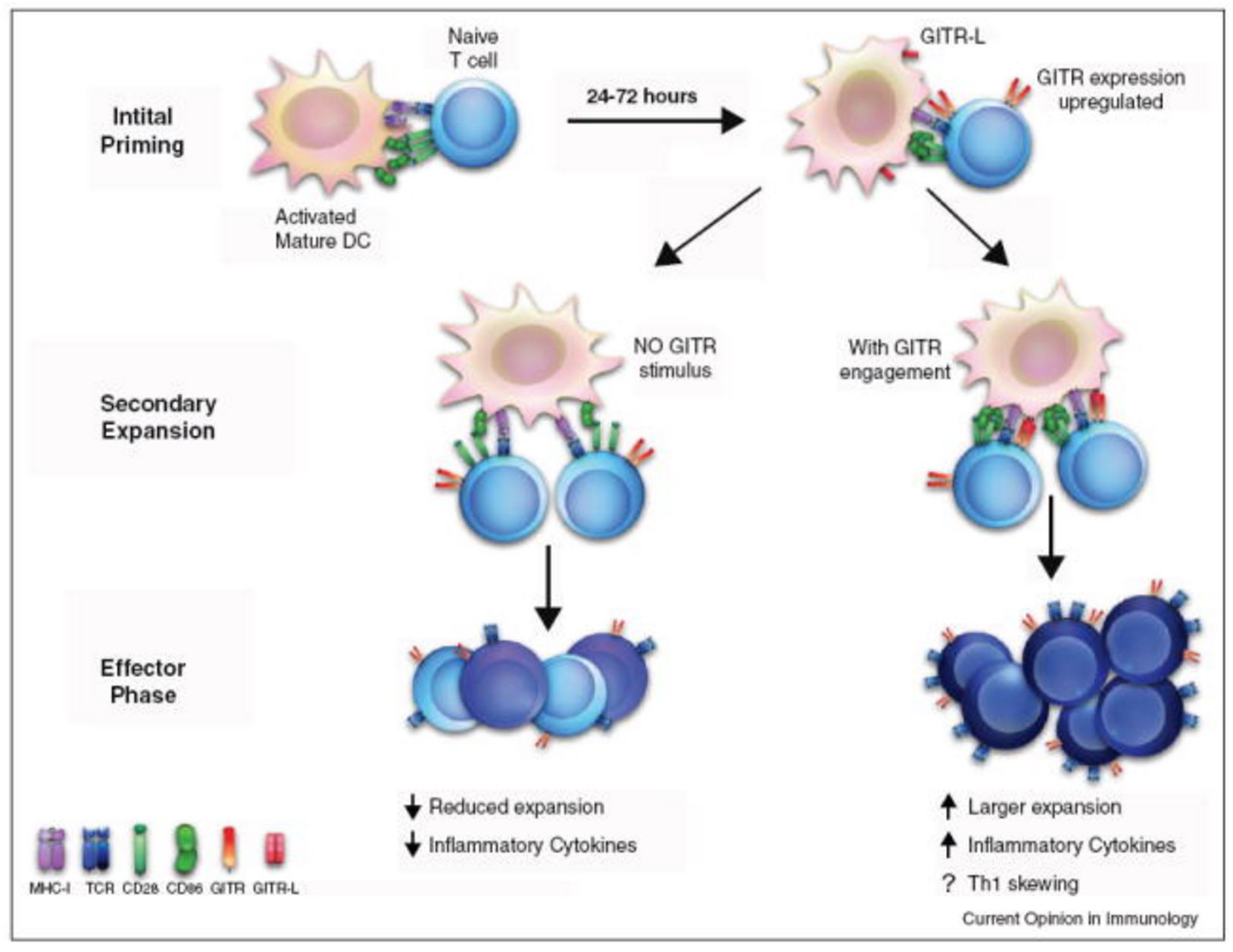 Model of GITR function during an immune response. During the initial phase of priming, naïve T cells are activated by interactions between the TCR and MHC molecules, receiving co-stimulation through CD28 binding to either CD80 or CD86. After passing this checkpoint, activated T cells enter secondary rounds of priming and expansion, upregulating GITR 24–72 h after this initial activation. If GITR-L is expressed by DCs, it alters both the quality and the quantity of the ensuing immune response. The net result of which is enhanced inflammatory response, with increased persistence of the antigen-specific T cells. http://www.ncbi.nlm.nih.gov/pmc/articles/PMC3413251/

Interest in GITR as a target for cancer immunotherapy developed from reports showing that agonist anti-GITR antibodies could overcome self-tolerance and reverse in vitro Treg suppression. Originally, this was attributed to direct effects on Tregs; however, it was subsequently shown with the use of GITR−/− T cells that GITR ligation worked primarily by making Teffs resistant to Treg suppression. Thus, GITR-L abrogates the immune response, similar to a checkpoint control. Therefore, disruption of GITR-GITR-L can augment the anti-tumor response.