Vaccine strategies for cancer immunotherapy depend on the induction of dendritic cells (DC) in close proximity to T cells. This is best accomplished in lymphoid tissue. However, directing vaccines to lymphoid tissue has been quite challenging. RNA vaccines have emerged as a viable method of targeting systemic DCs with tumor-associated antigens. Further, RNA vaccines mimic viral infections, leading to synchronized induction of both highly potent adaptive as well as type-I-IFN-mediated innate immune mechanisms for cancer immunotherapy. The RNA constructs, themselves, apart from the antigenic epitopes or proteins for which they serve as the template for translation, serve as an immune adjuvant.

DCs engulf naked RNA injected into lymph nodes by macropinocytosis, which is constitutively active in immature DCs. Intravenously administered RNA-LPX nanoparticles taken up by monocyte-derived human immature DCs almost completely co-localized with the macropinosome marker dextran. This allows for the cancer antigens encoded in the mRNA to be translated and epitopes expressed on MHC Class I and II molecules of the dendritic cell, stimulating antigen-specific adaptive immune responses, including CTL (cytotoxic T-cell responses), as with viral infections.

RNA-LPX nanoparticles also bind to Toll Like Receptor 3 and 7 (TLR3 and TLR7) in the endosomal compartment; this precipitates an anti-viral response from plasmacytoid dendritic cells (pDCs). IFNα is typically produced in the context of RNA virus infections by APCs (antigen presenting cells) sensing dsRNA and ssRNA via endosomal TLR3 and TLR7, respectively, and is crucial for an efficient inflammatory, antiviral environment. IFNα is required for the induction of antigen-specific (adaptive) immunity against viral infections. 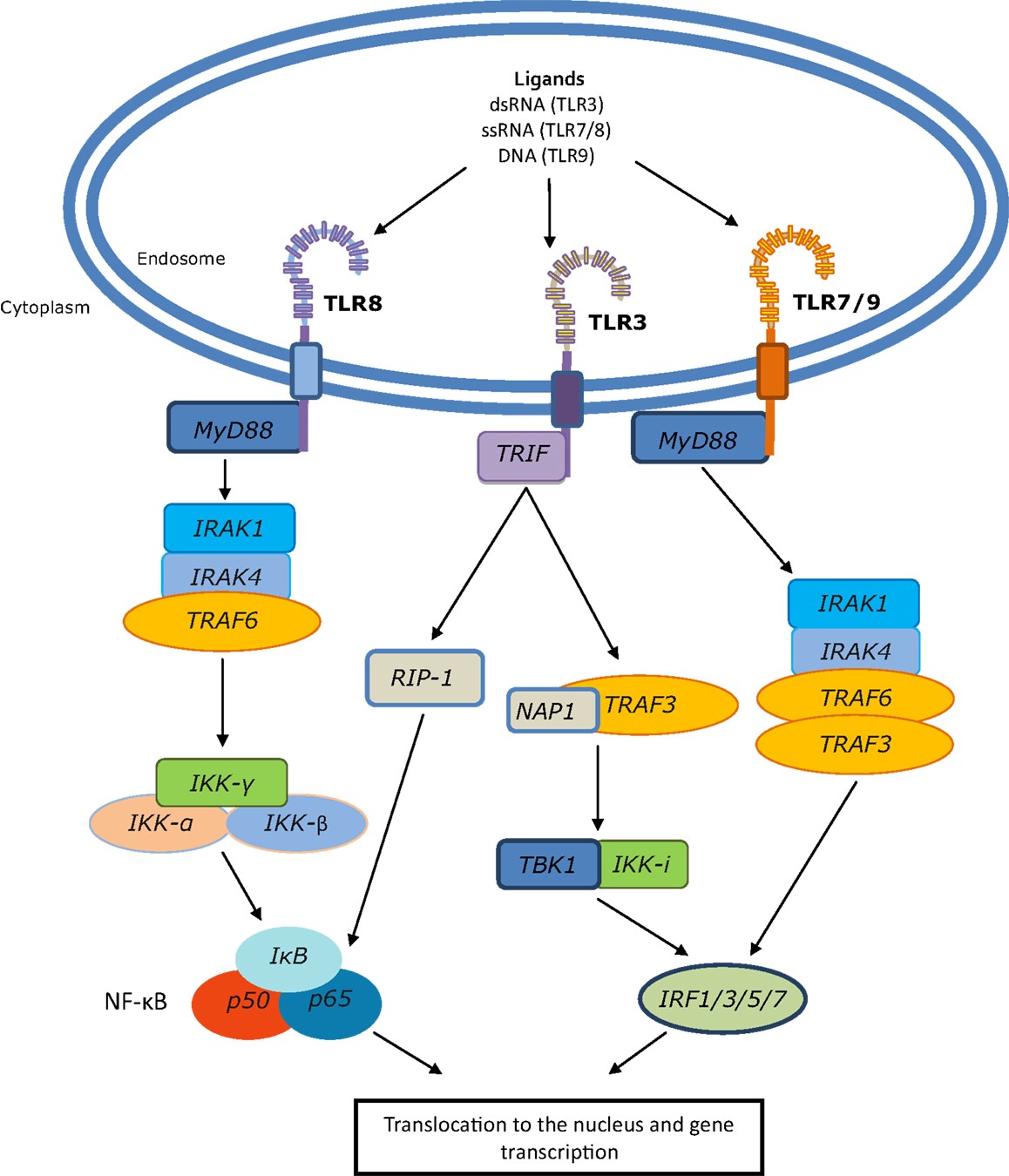 Toll-like receptors (TLRs) are a family of evolutionarily conserved pattern recognition receptors. There are 10 human TLRs, which recognize pathogen associated molecular patterns from fungi, bacteria, and viruses, such as lipopolysaccharide (LPS), flagellin, and dsRNA. Most TLRs are expressed at the cell surface where they recognize mainly bacterial products, whereas TLRs 3, 7, 8, and 9 are localized to endosomal compartments and respond to self and foreign nucleic acid structures. TLR3 recognizes dsRNA, while TLR7 and TLR8 both respond to ssRNA. TLR9 recognizes DNA, the binding event of which was believed to be sequence specific, favoring CpG-rich DNA. However, recent evidence suggests that DNA conformation is actually the key mediator of TLR9 activation, not the DNA sequence. Localization of these TLRs to the endosome likely represents a method of sequestering these molecules from inadvertent activation by host nucleic acids.

Induction of TLR7-driven type-I interferon release is essential for the full anti-tumor potency of RNA-LPX vaccines. Type I IFN as a key molecule in antigen-specific immunity against viral infections has further effects, for example, upregulation of MHC expression, promotion of maturation and cross-presentation in DCs, and direct inhibition of regulatory T-cell functions. LPX mRNA vaccines connect effective cancer immunotherapy with host pathogen-defense mechanisms. Mechanisms of antiviral host defense are important for survival, conserved in all vertebrates and evolutionarily optimized for high sensitivity and potency. RNA-LPX vaccines appear to mimic infectious non-self and thus mobilize concomitantly adaptive and innate antiviral mechanisms. The i.v. delivery of RNA-LPX simulates a viraemic pathogen intrusion in the blood stream, and by reaching DCs in various lymphoid tissues, mobilizes the full T-cell repertoire for adaptive immune responses. 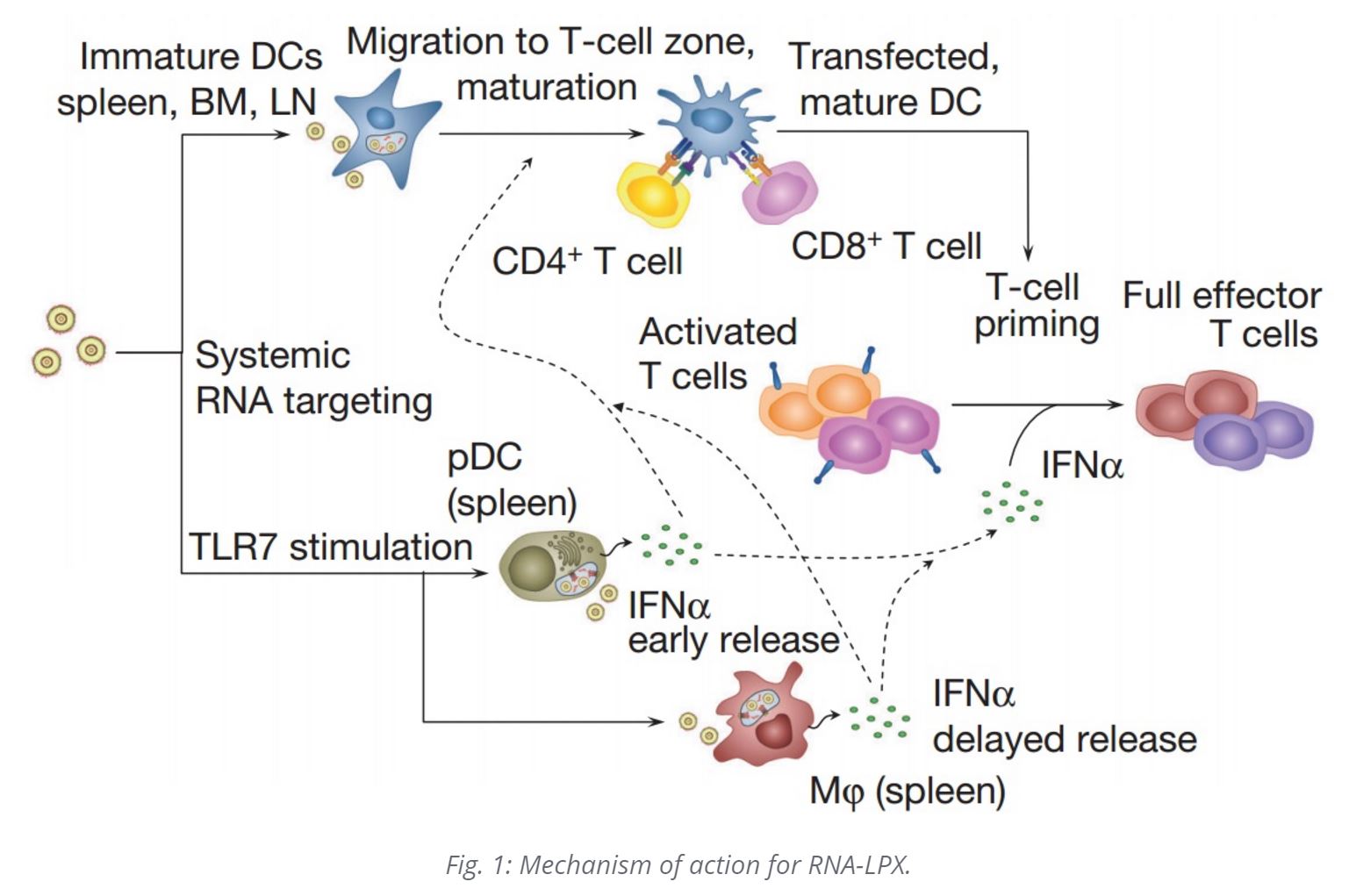 CV9103 is an mRNA vaccine targeting 4 antigens: prostate-specific antigen (PSA), prostate-specific membrane antigen (PSMA), prostate stem cell antigen (PSCA), and six-transmembrane epithelial antigen of the prostate 1 (STEAP1). In healthy men, these antigens are frequently and almost exclusively expressed in the prostate, and overexpressed in prostate cancer; with the exception of PSMA which is also overexpressed in the tumor-neovasculature of other cancers. (Unlike LXP-RNA, which is comprised of lipid nanoparticles, CV9103 is a mixture of free mRNA and mRNA complexed with protamine.]

CV9103 encodes full-length antigens and thus has the advantage to induce an immune response against all epitopes contained in the target protein without HLA-restrictions. This, and the inclusion of multiple antigens, was developed to reduce the risk of tumor immune escape due to loss of expression of individual antigens [28], to increase the clinical efficacy by inducing a broader immune response and to provide immune responses against antigens present in the individual tumor in a higher number of patients.

In a phase I/II study of intradermally-administered CV9103 to men with CRPC (castration-resistant prostate cancer):

Based on these results, a randomized, placebo-controlled phase IIb study in CRPC started to enroll patients in 2012 using CV9104, an advanced vaccine variant of CV9103 (https://clinicaltrials.gov/ct2/show/NCT01817738?term=NCT01817738&rank=1, NCT01817738). The primary endpoint of this trial is OS (overall survival) with PFS (progression-free survival) according to the criteria of the PCa working group as secondary endpoint. Further secondary endpoints will clarify the impact of immune response on overall survival and seek to determine biomarkers associated with improved survival. 197 patients with metastatic asymptomatic or minimally symptomatic CRPC have been randomized, a population expected to benefit from vaccinations as shown in the past. By using a large sample size and a placebo group, the trial will allow for evaluation of the therapeutic potential of mRNA vaccination against multiple antigens in PCa.

It would also be prudent to combine this approach with checkpoint inhibitors (e.g., ipilimumab and nivolumab or pembrolizumab) so that the immune responses induced by the RNA vaccines are not abrogated by the tumor.