Researchers at AstraZeneca have completed a small-scale study which demonstrated the synergistic benefit of utilizing two immunotherapy drugs to combat non-small cell lung cancer (NSCLC) over just a single immunotherapy drug. The study found that utilizing an immune checkpoint inhibitor for PD-1, called durvalumab, in combination with another immune checkpoint inhibitor for CTLA-4, called tremelimumab, had a tumor response rate of 23% for metastatic NSCLC. Researchers at AstraZeneca are, indeed, confident that combination immune checkpoint therapy is the key to developing more efficient immunotherapies to target and effectively treat cancer.

Medimmune oncology chief stated, “The latest findings reinforce our belief that the combination strategy we are pursuing is key to the future success of immuno-oncology treatment”. The outcome of the phase Ib clinical study has indeed sparked confidence for future clinical trials. Before delving into the study, its outcome, and what it means for the future of this rational drug strategy, let’s first examine the concepts of immune checkpoints, their relevance to cancer, and immune checkpoint inhibitors.

When a pathogen invades the a host, the host’s immune system first responds by attacking and destroying the antigen, usually though innate immune cells such as macrophages. The immune cells will phagocytose the pathogen, degrade it, and display small pieces of the pathogen called antigenic epitopes on surface major histocompatibility molecules I or II, depending on the antigen presenting cell (APC). The same is true with cancer cells – macrophages and dendritic cells phagocytose and display antigenic epitopes from the cancer cell on their surfaces for presentation to the immune system in order to elicit an adaptive immune response. 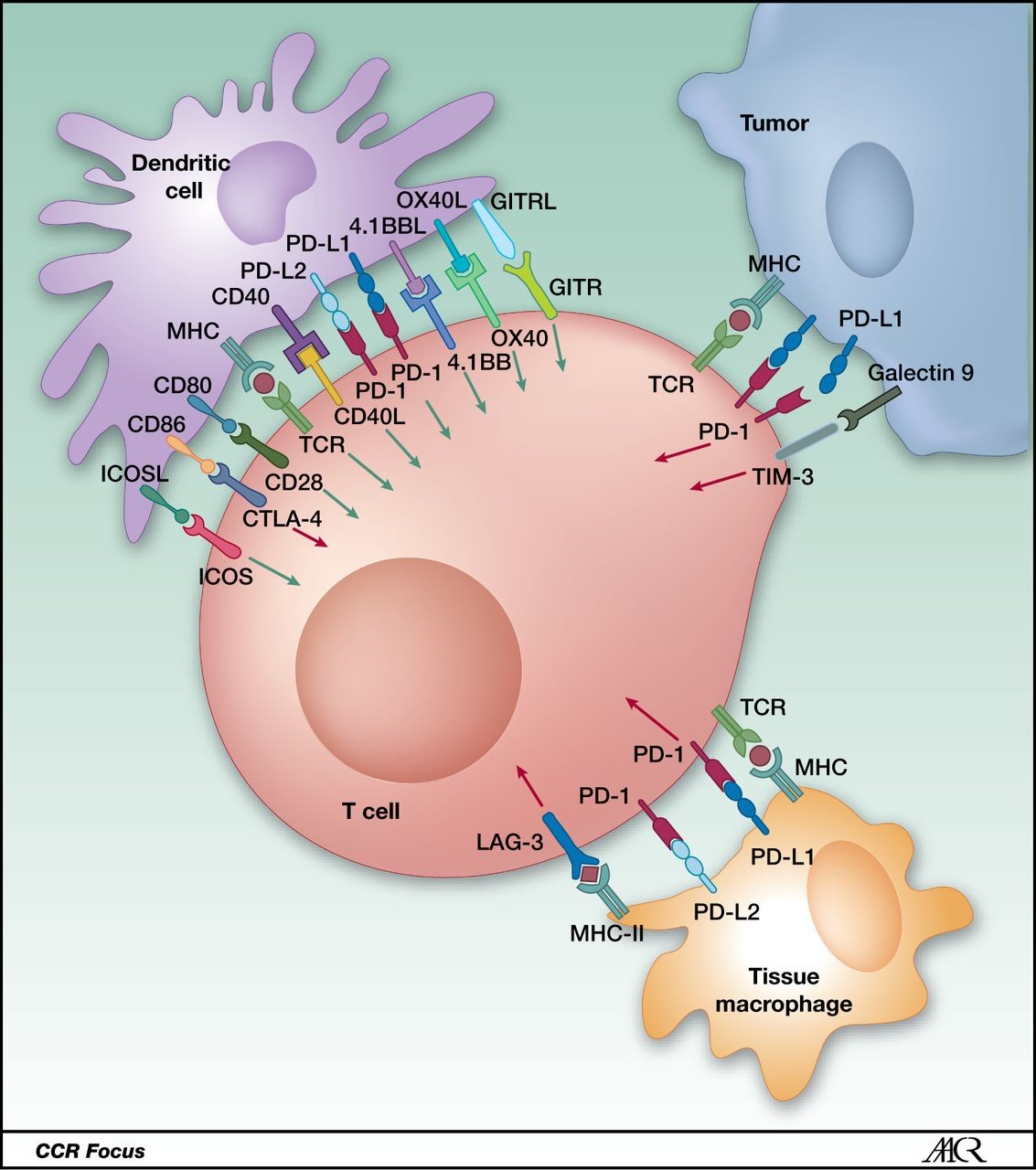 When responding to cancer, the immune system will display antigenic peptides on MHC I molecules to cytotoxic lymphocytes (CTLs), a type of T-cell which is vital to the destruction of tumor cells. For the CTL to activate, it must receive two main signals. This first signal comes from interactions between the T-cell receptor (TCR) on the CTL surface and the MHC I-antigen complex on the APC. The second signal, also referred to as a co-stimulatory signal, comes from interactions between CD28 on the CTL and CD80 (B7.1) on the APC.

Here is where immune checkpoints come into play. While the previous two interactions are vital for CTL activation, they are NOT the only interactions occurring between the two cells. There are numerous interactions between surface molecules of the CTL and the APC occurring along with the two main interactions. These are mediated through accessory receptors. Some of the interactions augment the activity of the CTL while others abrogate or suppress the CTL activity. Those interactions which inhibit the CTL activation are known as immune checkpoints. These checkpoints are a natural design in the immune response, which act as the “brakes” for the CTL, allowing it to activate for a period of time, but not allowing the response to proceed indefinitely. This mechanism is one of the numerous regulatory mechanisms of the immune response. 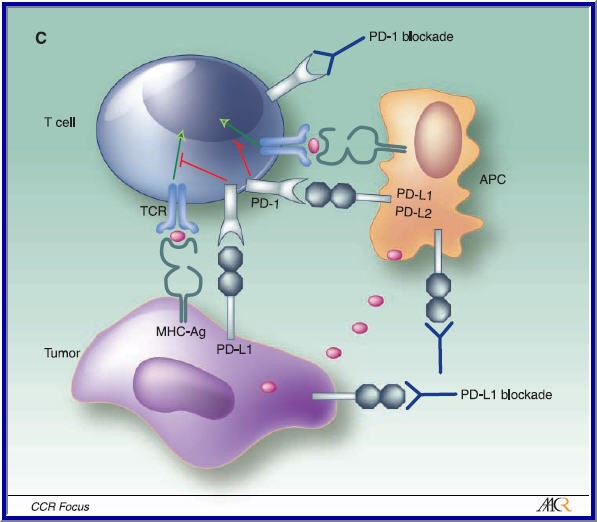 So what do these have to do with cancer and why would we want to inhibit them if they help stave off autoimmunity? Cancer is smart and has many mechanisms to outwit or destroy the host immune response. One of these mechanisms involves the expression of ligands which can bind to immune checkpoints on the CTL, suppressing the CTL response. This mechanisms allows the tumor cell to evade destruction by the CTL by suppressing the CTL via hijacking the immune checkpoint regulation mechanism. Earlier studies have found that cancer cells can express a high amount of surface PD-1L, a molecule which binds to and stimulates the PD-1 checkpoint on T-cells, suppressing their response. Another targetable immune checkpoint is CTLA-4 on the CTL, which binds to CD86 (B7.2) on dendritic cells, a professional APC. 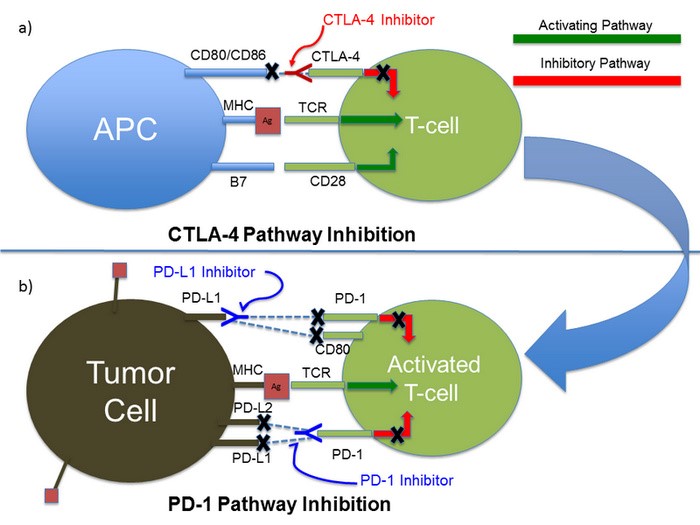 To test this hypothesis, Medimmune devised a phase Ib clinical study in which patients with locally advanced or metastatic NSCLC were given duravlumab and tremelimumab at varying does. Patients chosen were 18 years or older and have never received immunotherapy drugs prior to the study. The results found that a 20mg/kg dose of durvalumab every 4 weeks plus 1 mg/kg of tremelimumab showed manageable tolerability and had the best anti-tumor activity for tumors which were either positive or negative for PD-1 expression. Some adverse grade 3 and 4 drug side effects were observed, with only 28% of the patients requiring discontinuation of treatment due to drug related side effects.

Dr. Scott J. Antonia, Chair of the Department of Thoracic Oncology at Moffitt Cancer Center, stated, “Combination therapy with durvalumab and tremelimumab demonstrated antitumor activity in patients with NSCLC regardless of PD-L1 status, including in patients with no evidence of tumor cell membrane PD-L1 staining.” This combination treatment option is not only effective in patients with PD-1L positive tumors, but also provides a treatment option for those patients whose tumors do not express PD-1L. This provides a treatment option to PD-1L negative patients for which other treatment strategies, including other immunotherapy drugs, are relatively ineffective. Currently, AstraZeneca is conducting further phase III clinical studies to continue evaluating the efficacy and safety of combination immune checkpoint therapy.