Baxalta, the biopharmaceutical spinoff of Baxter, entered into a $1.7 B deal with Precision BioSceinces for 6 CAR-T (Chimeric Antigen Receptor T-cell) projects, and Saronic Biotechnology announced positive data in preclinical studies of its autologous dendritic cell vaccine for hepatocellular carcinoma.

Both of these belong to the therapeutic class of cell-based immunotherapy. While all cell-based immunotherapies belong in the same class as the autologous, dendritic cell-based Provenge, many differ in significant ways. While 70% of the industry-sponsored late-stage trials utilize autologous cells, 46% utilize allogeneic cells (one involves both), and 30% involve gene-modification. Just less than half utilize dendritic cells while the others employ other immunotherapy cell agents including NK cells, lymphocytes, and allogeneic tumor cell lines.

Homing endonucleases are nature’s genome editing system. They are site-specific DNA-cutting enzymes encoded in the genomes of many eukaryotic species. Homing endonucleases have the unusual ability to precisely recognize long DNA sequences (12-40 base pairs) that are typically rare enough to occur only once in a complex genome. By targeting a double strand DNA break to a specific site in the genome of a cell, a homing endonuclease triggers the cell’s DNA repair pathways and stimulates homologous recombination. In nature, this results in gene conversion events in which the genome of the cell is modified in a very precise way, most frequently by the insertion of a foreign gene at the site of the DNA break. The ability to generate a single DNA break in a complex genome to achieve gene modification – without off-targeting – makes homing endonucleases the ideal starting material for a genome editing technology.

The backbone of the ARCUS technology is the ARC Nuclease – a fully synthetic enzyme that is very similar to a homing endonuclease but is modified to be a better starting point for the development of new gene editing reagents. ARC Nuclease shares many of the positive attributes of a homing endonuclease, such as small size and unparalleled sequence specificity, but it can more easily be evolved into a custom gene editing tool that recognizes specific DNA sequences. Each ARCUS reagent is optimized using a set of proprietary in silico and lab-based techniques to ensure maximum gene editing efficiency with minimum off-target activity.

The collaboration includes six cancer targets against which chimeric antigen receptors will be generated using ARCUS gene editing technology. The targets have not been disclosed and clinical studies of the first product are expected to begin in 2017.

Precision’s CAR-T cells are generated from healthy donors, as opposed to autologous cell CAR-T approaches by Juno Therapeutics, Kite Pharma, and Novartis. The use of donor cells allows for the preparation of “off the shelf” cell therapy, similar to Cellectis’ UCART cells which are derived from allogeneic donors.

Saronic’s approach employs autologous dendritic cells pulsed with tumor lysates from the patient. An orthotopic murine HCC was established by implantation of Hepa1-6 cells in the liver. The impact of DC vaccine loaded with Hepa1-6 cell lysate on tumor progression, survival, and tumor-infiltrating lymphocytes and cytokines was examined. Treating mice with DC vaccine loaded with Hepa1-6 cell lysate inhibited the progression of murine HCC generated through orthotopic implantation of Hepa1-6 cells.

FOXP3 is a transcriptional regulator which is crucial for the development and inhibitory function of regulatory T-cells (Treg). It plays an essential role in maintaining homeostasis of the immune system by allowing the acquisition of full suppressive function and stability of the Treg lineage, and by directly modulating the expansion and function of conventional T-cells. FOXP3 can act either as a transcriptional repressor or a transcriptional activator depending on its interactions with other transcription factors, histone acetylases and deacetylases. The suppressive activity of Treg involves the coordinate activation of many genes, including CTLA4 and TNFRSF18 by FOXP3 along with repression of genes encoding cytokines such as interleukin-2 (IL2) and interferon-gamma (IFNG). It inhibits cytokine production and T-cell effector function by repressing the activity of two key transcription factors, RELA and NFATC2.

Defects in the FOXP3 gene cause an X-linked autoimmune/immunodeficiency syndrome in humans and Scurfy in mice, which is lethal in males with only a single copy of the gene.  These mice exhibit over proliferation of CD4+ T-cells.  Scurfy is thought to be caused by an inability to accurately regulate CD4+ T-cell activity. FOXP3 is very important in autoimmune diseases – scientists hope that in the future, cell therapy with FOXP3 positive T-cells may lead to treatments or cures to autoimmune diseases like diabetes and asthma and aid during recovery from organ transplantation. 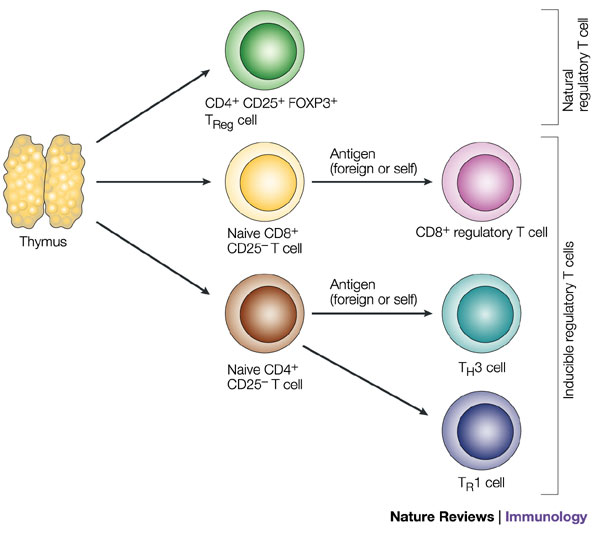 Natural regulatory T cells express the cell-surface marker CD25 and the transcriptional repressor FOXP3 (forkhead box P3). These cells mature and migrate from the thymus and constitute 5–10% of peripheral T cells in normal mice. Other populations of antigen-specific regulatory T cells can be induced from naive CD4+CD25- or CD8+CD25- T cells in the periphery under the influence of semi-mature dendritic cells, interleukin-10 (IL-10), transforming growth factor- (TGF- ) and possibly interferon- (IFN- ). The inducible populations of regulatory T cells include distinct subtypes of CD4+ T cell: T regulatory 1 (TR1) cells, which secrete high levels of IL-10, no IL-4 and no or low levels of IFN- ; and T helper 3 (TH3) cells, which secrete high levels of TGF- . Although CD8+ T cells are normally associated with cytotoxic T-lymphocyte function and IFN- production, these cells or a subtype of these cells can secrete IL-10 and have been called CD8+ regulatory T cells. http://www.pharmiweb.com/pressreleases/pressrel.asp?ROW_ID=154870#.VtHV45wrI8Z#ixzz41ONTjsO2