Regions of tumor hypoxia, or low-oxygen conditions, is a common feature of the microenvironment of many solid tumors. The network of blood vessels supplying solid tumors is known to be highly irregular and disordered, failing to deliver sufficient oxygen and nutrients to the rapidly dividing cancer cells. Compromised oxygen delivery results in the development of regions of tumors that are chronically and transiently hypoxic. Hypoxia is associated with increased tumor resistance to chemotherapy and radiation treatment. Many conventional reactive chemotherapies are not able to penetrate into the hypoxic zones that are located at a distance from the blood vessels.

Threshold is engaged in the discovery and development of drugs that target tumor hypoxia, a common characteristic of the tumor microenvironment that is associated with tumor progression, metastasis, resistance to radiotherapy and standard chemotherapy, and ultimately treatment failure.

Evophosphamide (a bromo-analog of ifosfamide, a DNA alkylating agent) is, a prodrug that is activated only under hypoxic conditions commonly found in the tumor microenvironment. Within regions of tumor hypoxia, evofosfamide releases bromo isophosphoramide mustard (Br-IPM), a potent DNA alkylating agent. Br-IPM kills tumor cells by forming DNA crosslinks, rendering cells unable to replicate their DNA and divide as well as interfering with the transcription of DNA to make essential proteins. Once activated in hypoxic tissues, Br-IPM can also diffuse into surrounding oxygenated regions of the tumor and kill cells there via a “bystander effect.”  Because of its preferential activation in the targeted hypoxic regions of solid tumors, evofosfamide may be less likely to produce broad systemic toxicity seen with untargeted cytotoxic chemotherapies. 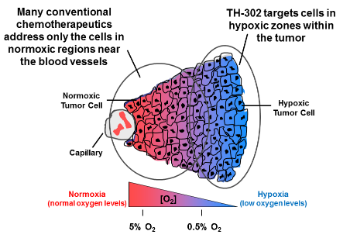 The company is pursuing additional products to exploit the tumor microenvironment:

Bioatla develops (or “evolves”) antibodies that become activated by physiologic conditions that are present in the tumor microenvironment, including: 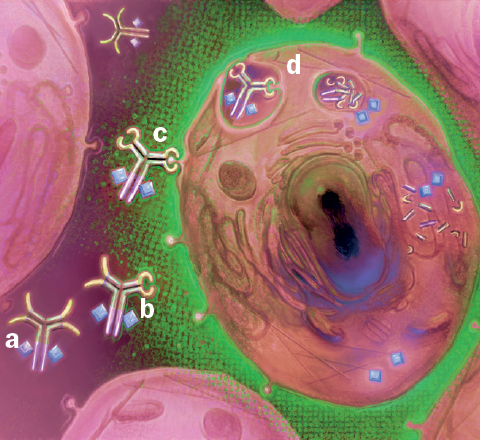 CAB mode of action as applied to improved cancer therapies. CAB-ADC passes benignly through normal tissue (a) until it encounters a tumor cell’s microenvironment (green). This activates the CAB’s binding ability (b) and the CAB binds to the tumor cell (c). Following internalization (d) the CAB releases its ADC payload, selectively killing the tumor cell.

The goal is to develop molecules with a higher therapeutic index, that is, with more activity against cancers with less side-effects that arise from targeting of normal tissues. This will increase safety by reducing “on-target toxicity,” namely drugs correctly binding their target but in an undesired part of the body, resulting in undesirable toxicity. Conditionally activated proteins can be engineered to function only in the correct, desired location in the body, minimizing such risks.

Pfizer entered into an agreement with BioAtla potentially worth more than $1 billion to develop a new class of antibody therapeutics for the treatment of cancer, BioAtla announced. The companies plan to use BioAtla’s Conditionally Active Biologic (CAB) platform in combination with Pfizer’s antibody drug conjugate (ADC) payloads.

What Are Antibody-Drug Conjugates?

ADCs are therapeutic agents designed to target the delivery of chemotherapy to tumor cells. ADCs link cytotoxic agents to monoclonal antibodies that bind to tumor cell-specific antigens or to antigens that are overexpressed on the surface of tumor cells. The antibody acts as a sort of GPS system, and the theory is that this should increase delivery of potent cell-killing drugs to the tumor, while reducing the exposure of normal cells.

ADCs are made up of three parts: a monoclonal antibody, a cytotoxic drug, and a linker that joins the two together. The antibody guides the ADC to target tumor cells, where it binds to cell surface antigens. The ADC is then taken into the cell and the cytotoxic drug is released to perform its cell-killing function. 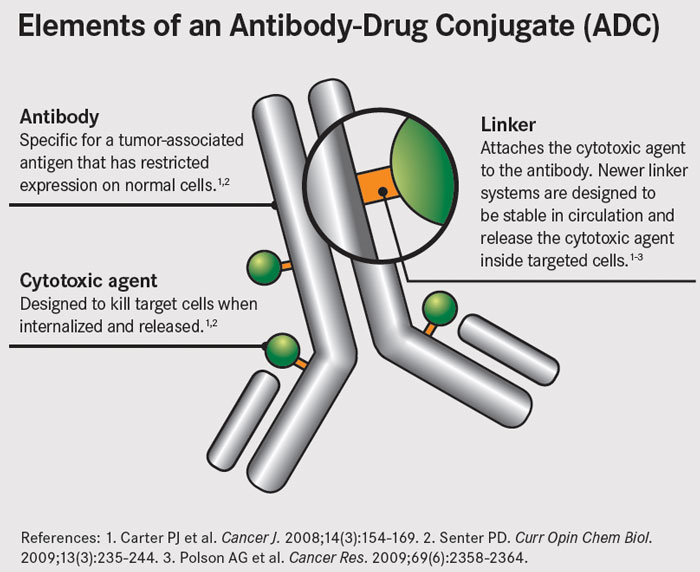 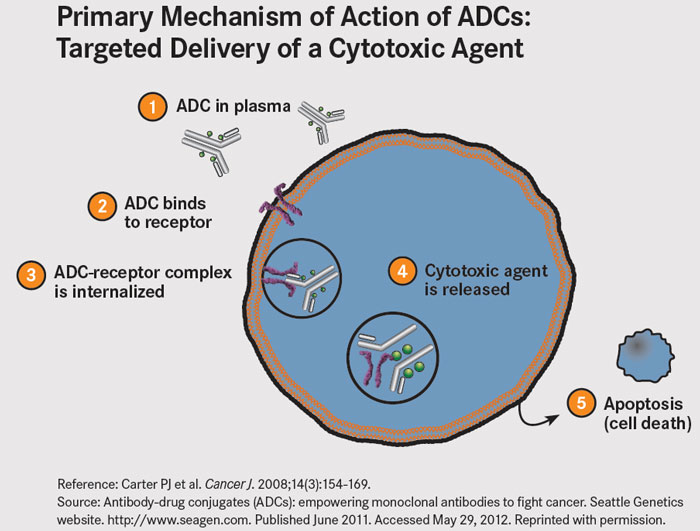