Celgene and Nurix entered into a collaboration to develop small molecule treatments for cancer that target the ubiquitin proteasome system (UPS).

How does the UPS work?

Ubiquitylation is a common signal for eukaryotic 26S proteasomes and involves a cascade of E1 ubiquitin-activating, E2 ubiquitin-conjugating and E3 ubiquitin ligase enzymes. In this cascade, E1 (plus ATP) first adenylates the carboxy-terminal carboxylate of ubiquitin (Ub), forming Ub–AMP, and then forms a Ub thioester intermediate (E1–Ub). Ubiquitin is transferred from E1 to E2, and then to the protein target with assistance from E3 (although ubiquitylation without E3 can occur118). Typically, an isopeptide bond is formed between the ubiquitin C-terminal carboxylate and the ɛ-amino group of a Lys side chain of the substrate protein or the growing ubiquitin chain (Lys48-linked ubiquitin chains are common signals for 26S proteasomes). Deubiquitylating enzymes within 26S proteasomes release and recycle ubiquitin during substrate protein degradation. PPi, inorganic pyrophosphate. 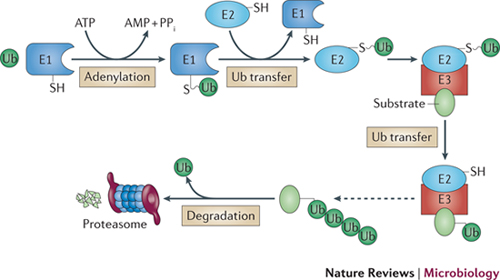 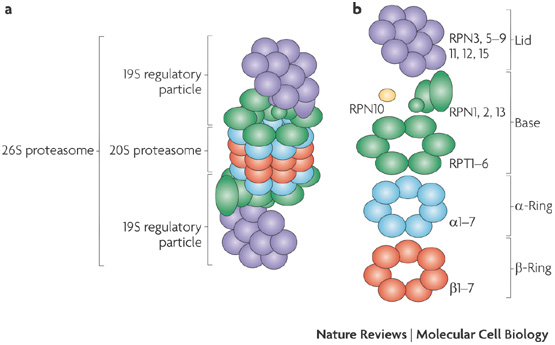 Why is the UPS Important?

UPS is critical in the appropriate function of (1) cell cycle control, (2) DNA damage response via p53, and (3) the apoptosis cascade. 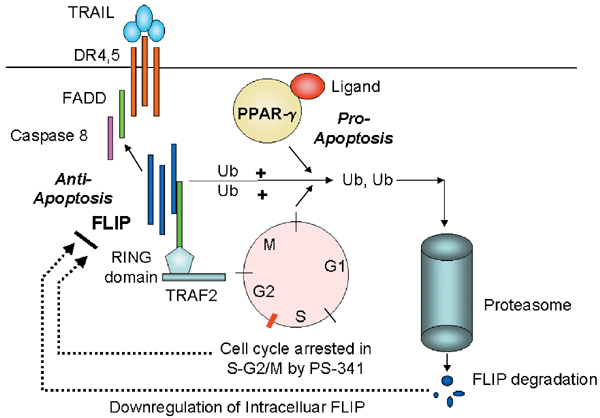 Ubiquitination of FLIP regulates TRAIL-induced apoptosis. The trimeric TRAIL results in the recruitment of death domain receptor 4 or death domain receptor 5 (DR4, DR5) molecules. The TRAIL-induced conformational changes of the DR4/DR5 death domain result in the recruitment of FADD and procaspase-8, which then signals apoptosis. FLIP contains a death domain that can compete with caspase-8 cytoplasmic binding domain of DR4, DR5. The intracellular levels of FLIP are regulated by the proteasome degradation pathway. One proposed pathway is binding of FLIP to TRAF2. TRAF2 contains a RING zinc-finger domain and possesses E3 ligase activity.

Nurix is targeting E2 conjugating enzymes and E3 ligases that control the UPS. Regulation of protein stability by the UPS is modulated by the activity of these E2 and E3 enzymes which control the tagging of proteins with ubiquitin for degradation by the proteasome. The human genome encodes approximately 1,000 different E3 ligases and 60 E2 enzymes. To date, a number of these ligases have recently been shown to play key roles in human diseases, particularly in cancer.

Discovered prior to scientific understanding of the central role of the UPS in cellular metabolism, highly successful drugs such as Velcade®, Kyprolis® and Revlimid® have been found to act through modulation of the UPS. Velcade® and Kyprolis® are 26S proteasome inhibitors and Revlimid® is a modulator of cereblon, an E3 ligase. And yet, these products target only two of the multitude of UPS pathways now available for drug discovery.

The UPS in Cancer

Some tumors have altered regulation of the UPS preventing degradation of proteins encoded by oncogenes that drive tumor cell growth. This dysregulation can be caused by specific mutations at the interface of an E3 ligase and its oncogenic substrate. Nurix identifies compounds that selectively re-engage the UPS to target these harmful proteins.

Selective modulators of certain E3 ligases that have been identified as checkpoints for the immune system.