I was sent articles by two non-cancer researchers last week – they are quite fitting for discuss on this blog (thank you, Gina and Sherilyn). The first was on DCA (dichloroacetate), a drug approved for congenital lactic acidosis, and the second about bromelain, an enzyme in pineapples.

Dichloroacetate is a chemical that is structurally similar to acetic acid in which two of the three hydrogen atoms have been replaced by chlorine atoms. DCA inhibits pyruvate dehydrogenase kinase, a key enzyme in glucose metabolism, which converts pyruvate to acetic acid, thereby enabling the Krebs Cycle of oxidative metabolism of glucose. Cancer cells prefer anaerobic metabolism, that is why they breakdown increased quantities of glucose (Warburg Effect); the intermediates are important for building cellular components. 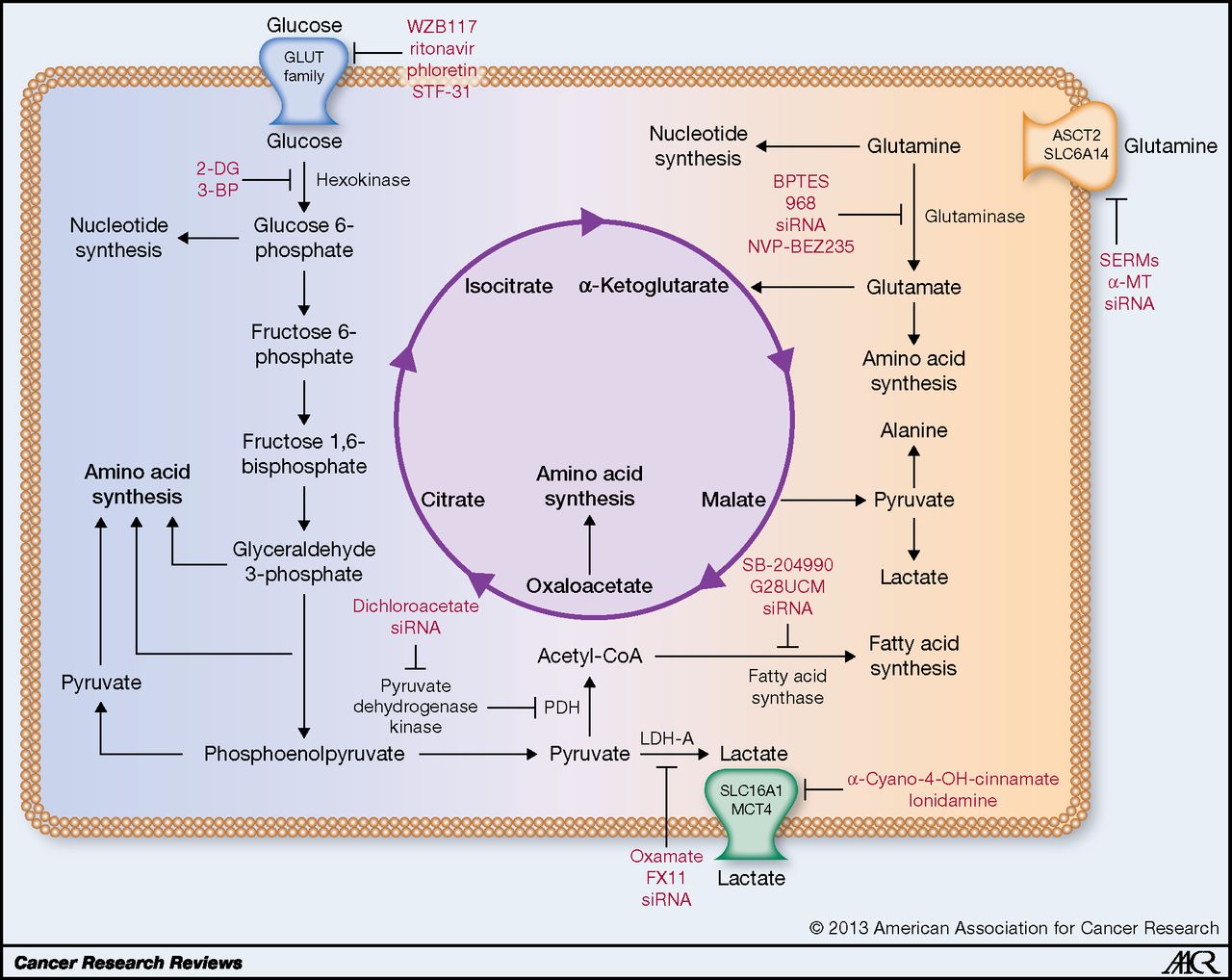 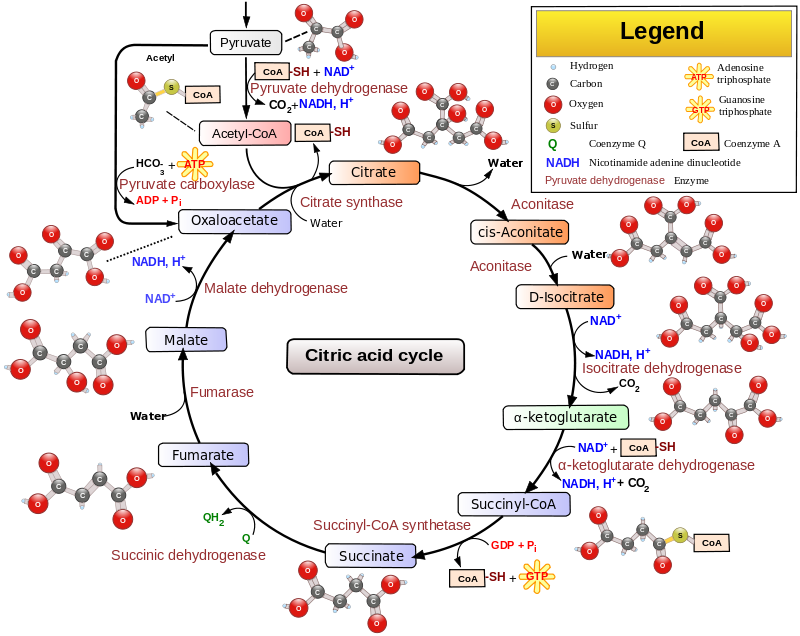 Why the interest in DCA?

A clinical study of patients with glioblastoma revealed potential activity of DCA on mitochondria, as well as some interesting clinical findings in 5 patients treated with DCA – Michelakis 2010. The study was not randomized, and temozolamide and radiation was concomitantly administered, so it was not possible to discern the direct effect of DCA.

The mechanism of action of DCA and early clinical results combine to generate great interest in DCA, which is a compound that is readily available commercially to treat an inborn error of metabolism.

A randomized Phase 2 clinical study of DCA versus placebo in patients with head and neck cancer who were receiving cisplatin is underway. The study is no longer recruiting and should be completed in January of 2019. [See Study of DCA (Dichloroacetate) in Combination With Cisplatin and Definitive Radiation in Head and Neck Carcinoma.]

Bromelain is an extract or proteolytic enzymes from pineapples (Ananas comosus). It is used in debriding skin in the treatment of burns and as a supplement to aid in digestion of proteins. Bromelain is also used for reducing swelling (inflammation), especially of the nose and sinuses, after surgery or injury. A Phase 2 clinical study of two doses of bromelain (10mg and 50mg) is ongoing in patients with advanced stage mixed types of carcinoma of breast, lung, colon, gastro-intestinal, ovarian, cervical, uterine, prostatic, bladder, hepatic, lymphoma, and melanoma. [See Bromelain, Comosain as a New Drug for Treating and Preventing Various Types of Cancer in the Humans.]

The use of bromelain in cancer has its roots in a laboratory study of several tumor cell lines – P-388 leukemia, sarcoma (S-37), Ehrlich ascitic tumor (EAT), Lewis lung carcinoma (LLC), MB-F10 melanoma and ADC-755 mammary adenocarcinoma – along with 5-fluorouracil, a cancer drug that has been inuse for decades:

Intraperitoneal administration of bromelain (1, 12.5, 25 mg/kg), began 24 h after tumor cell inoculation in experiments in which 5-fluorouracil (5-FU, 20 mg/kg) was used as positive control. The antitumoral activity was assessed by the survival increase (% survival index) following various treatments. With the exception of MB-F10 melanoma, all other tumor-bearing animals had a significantly increased survival index after bromelain treatment. The largest increase  approximately 318 %) was attained in mice bearing EAT ascites and receiving 12.5 mg/kg of bromelain. This antitumoral effect was superior to that of 5-FU, whose survival index was approximately 263 %, relative to the untreated control. Bromelain significantly reduced the number of lung metastasis induced by LLC transplantation, as observed with 5-FU. The antitumoral activity of bromelain against S-37 and EAT, which are tumor models sensitive to immune system mediators, and the unchanged tumor progression in the metastatic model suggests that the antimetastatic action results from a mechanism independent of the primary antitumoral effect.

How does bromelain work?

Studies does in mice showed that bromelain induced apoptosis-related proteins along with inhibition of NF-kappaB-driven Cox-2 expression by blocking the MAPK and Akt/protein kinase B signaling in DMBA-TPA-induced skin tumors. 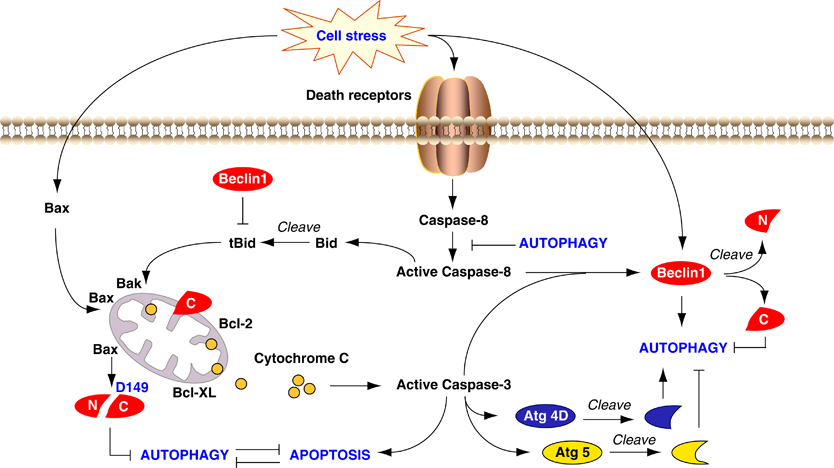 Crosstalk between apoptosis and autophagy. Autophagy and apoptosis share common stimuli and signaling pathways, and exhibit some degree of mutual inhibition. During sustained exposure to apoptotic stimuli, caspase-mediated cleavage of Beclin 1 generates fragments (‘N’ and ‘C’) that lose their ability to induce autophagy. The C-terminal fragment translocates to the mitochondria and sensitizes cells to apoptotic signals. Although apoptosis-associated cleavage of Beclin 1 and Atg5 inactivates autophagy, the cleavage of Atg4D by caspase-3 generates a fragment with increased autophagy activity. Moreover, autophagy inhibits apoptosis partly by degrading active caspase-8 or preventing activation of Bid by Beclin 1. http://www.nature.com/cdd/journal/v18/n4/fig_tab/cdd2010191f3.html 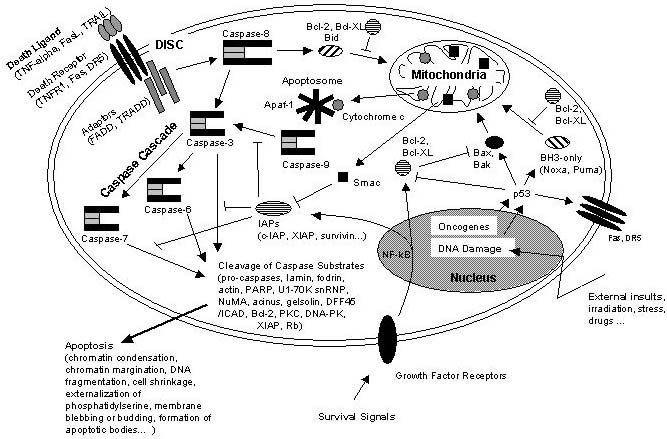 Schematic representation of some major apoptotic signaling pathways. Apoptosis can be induced in response to various signals from inside and outside the cell, e.g. by ligation of so called death receptors or by cellular stress triggered by oncogenes, irradiation or drugs. Signals emanating from death receptors initially activate the Death Inducing Signaling Complex (DISC) which mediates activation of the initiator caspase-8. Activated caspase-8 initiates a caspase cascade by processing the effector caspases-3, -6, and – 7 which in turn cleave a number of protein substrates. Cleavage of caspase substrates eventually leads to the characteristic morphological and biochemical features of apoptosis. In some cell systems, this direct caspase cascade is sufficient to elicit apoptosis on its own (type 1 signaling), whereas in other cases the signal coming from the DISC must be amplified by the proteolytic activation of the BH3-only protein Bid by caspase-8 with subsequent induction of apoptotic events at the mitochondria (type 2 signaling). Mitochondrial apoptotic signaling includes the release of cytochrome c from the mitochondrial intermembrane space to the cytosol where it contributes to the formation of the apoptosome which consists of cytochrome c, Apaf-1 and dATP. The apoptosome activates caspase-9 which is another initiator caspase and thus is able to mediate the caspase cascade by activating caspase-3. Another mitochondrial pro-apoptotic factor is Smac which acts by inhibiting the IAPs from blocking caspase activity. IAPs are a family of proteins with anti-apoptotic activity by directly inhibiting caspases. IAP expression can be upregulated in response to survival signals such as those coming from growth factor receptors, e.g. by activation of the transcription factor NF-kB, therefore providing a means to suppress apoptosis signaling. Of central importance are the anti-apoptotic Bcl-2 family members such as Bcl-2 and Bcl-XL which counteract the action of BH3-only proteins such as Bid but also of pro-apoptotic Bax and Bak and thus can inhibit mitochondrial pro-apoptotic events. Apoptotic signals coming from the inside of the cell frequently have their origin within the nucleus, being a consequence of DNA damage induced by irradiation, drugs or other sort of stress. DNA damage in most cases eventually results in the activation of the p53 transcription factor which promotes expression of pro-apoptotic Bcl-2 members and suppresses anti-apoptotic Bcl-2 and Bcl-XL. Other organelles besides mitochondria and the nucleus, such as the ER and lysosomes also have been implicated in apoptotic signaling pathways, and it should be kept in mind that presumably hundreds of proteins are part of an extremely fine-tuned regulatory network consisting of pro- and anti-apoptotic factors. http://www.celldeath.de/encyclo/aporev/revfigs/revfig_6.htm

1 thought on “What do pineapples, glucose, and cancer have in common – mitochondria”