Researchers have identified a handful of mutations in patients with advanced prostate cancer for which therapeutics are already available, or in development. The genomes of 150 patients with metastatic (Stage 4) hormone-resistant disease were analyzed in order to develop a precision medicine framework for the treatment of advanced prostate cancer. 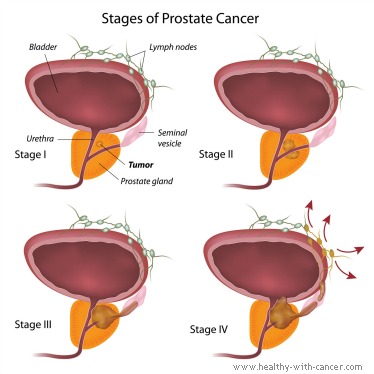 Indeed, 89% of the patients had “clinically actionable” mutations, meaning that therapies are already on the market (or in development) to treat the patients, although the approved indications for many products that target the mutations are not for prostate cancer, specifically.

Sixty-two percent of the patients with advanced hormone-resistant disease had mutations in the androgen receptor (as would be expected), however, 65% percent had mutations in other cancer-related genes including p53, PTEN, ETS transcription factors induced by the Ras/Raf mitogenic pathway. New genomic alterations in other oncogenes were also identified, including PIK3CA/B, R-spondin, BRAF/RAF1, APC, β-catenin, and ZBTB16/PLZF. 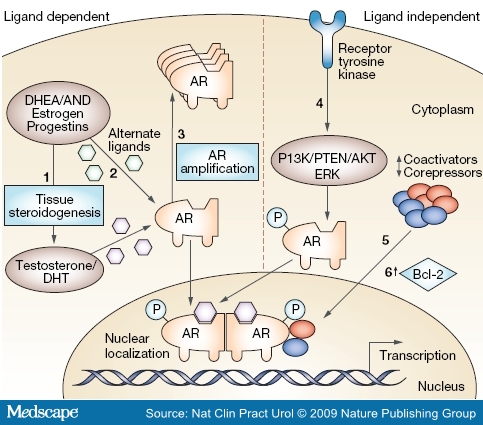 Mechanisms of castration resistance in prostate cancer. This figure provides an overview of mechanisms demonstrated or hypothesized to be involved in the development of castration resistance in prostate cancer, divided into ligand-dependent and ligand-independent mechanisms. (1) Tissue and tumoral steroidogenesis contribute to synthesis of testosterone and DHT, and might lead to persistence of tissue-level androgen despite castration. (2) Mutations in the AR allow activation by alternate ligands or increased affinity for androgens. (3) Amplification increases AR abundance. (4) Ligandindependent activation of AR through ligand-independent modifications or cross-talk with other pathways, including phosphorylation of AR leading to hypersensitization and increased nuclear translocation. (5) Change in the balance of coactivators and corepressors augment AR activity. (6) Bypass pathways functioning independently of AR activity through upregulation of antiapoptotic molecules, such as Bcl-2. In addition, stem cells continuously produce both androgen-sensitive and castration-resistant clones (not shown). Abbreviations: AKT, akt serine/threonine kinase; AND, other androgenic steroidal precursors; AR, androgen receptor; DHEA, dehydroepiandrosterone; DHT, dihydrotestosterone; ERK, extracellular signal-regulated kinase; P, phosphorylated residues; PI3K, phosphoinositide 3-kinase; PTEN, phosphatase and tensin homolog.

“The study’s findings echo a larger trend in cancer research: When it comes to identifying effective drug treatments, the site of the cancer is less significant than a particular cancer’s genetic blueprint.” This study provides additional validation of the concept that cancers of all types must be studied not according to their sites of origin, but rather according to the driver mutations that they possess. It also provides further evidence that our regulatory pathways for approval to use drugs and reimbursement for their use is flawed. Indeed, restricting approval and reimbursement to the approved claims (by cancer site of origin) does not allow for optimal, genomics-driven precision medicine.

Eight percent of the patients had these mutations in germ line cells, suggesting that screening of individuals with family histories of prostate cancer is appropriate.