Regen Biopharma recently filed an IND (Investigational New Drug Application) with the FDA to permit the initiation of Phase 1 clinical trials of its dCellVax treatment for advanced breast cancer.

The approach is brilliant, because it is feasible, unlike trying to silence oncogene expression in cancers; it involves silencing genes in the dendritic cell so that they withstand checkpoint control:

“The dCellVax approach to cancer is different than other gene silencing therapeutics currently in development. Most companies use gene silencing to block abnormal genes found in the tumor (oncogenes). Unfortunately, to get tumor cure with this approach, one would need to silence 100% of the cancer cells, otherwise, the remaining cells will continue to multiply. Achieving silencing in 100% of cancer cells is next to impossible. With the dCellVax approach, we are silencing genes that suppress the immune response to cancer. With this approach, even achieving silencing in 20% of immune cells is enough to cause an increased immune response, which hopefully will overcome the tumor,” said Dr. Ichim. “To our knowledge this is the first time that gene silencing is being proposed as a means of overcoming immune suppression in a clinical situation.”

The product uses autologous dendritic cells from the patient, which are modified to become resistant to immune suppression induced by cancer cells via their secretion of IDO – indolamine -2,3-deoxygenase:

The dCellVax therapeutic product is based on extracting blood from patients, growing a specialized type of immune cell from the blood called the “dendritic cell” and then subsequently genetically modifying the dendritic cell to become resistant to cancer’s immune suppressive activity. It is known that cancer modifies the immune system by producing proteins which result in immune suppression. One such protein which cancer stimulates is an enzyme, indolamine 2,3 deoxygenase (IDO), which cancer turns on in dendritic cells. While dendritic cells are usually immune stimulators, dendritic cells found in cancer patients suppress the immune system as a result of expressing IDO.

Researchers at the University of Western Ontario, led by Dr. Wei-Ping Min, have demonstrated that using a genetic blockade of IDO in dendritic cells makes them resistant to the effects of cancer, and allows them to stimulate potent immune responses against tumors.

This approach constitutes a genetic method (siRNA) to bypass a checkpoint control (IDO). The company had previously shown that the treatment enhanced allogeneic T-cell activity and reduced Treg activation, in vitro.

Knockdown of IDO in DCs does not affect the uptake of antigen but enhances allogeneic T cell response. (a) IDO-silenced DCs retain capacity to phagocytose: DCs were cultured and transfected with IDO siRNA (IDO-silenced DCs) or control siRNA (control DCs) as described in the legend to Figure 1 in the absence (upper panel) or presence of LPS (lower panel). FITC-labeled dextran was added 24 hr later and the amount phagocytosed by cells assessed by flow cytometry as described in Material and Methods. (b) IDO-silenced DCs enhanced allogeneic T cell response. BALB/c mice-derived DCs were transfected with siRNA as described in the legend to Figure 1 and allogeneic (C57B/6) T cells were incubated with siRNA-treated DCs at the indicated concentrations with or without incubation with kynurenine (50 μmol L−1) for 72 hr (+ Ky). Proliferation was determined by 3H-thymidine incorporation. Data are representative of three independent experiments.* (p < 0.05, one-way ANOVA). 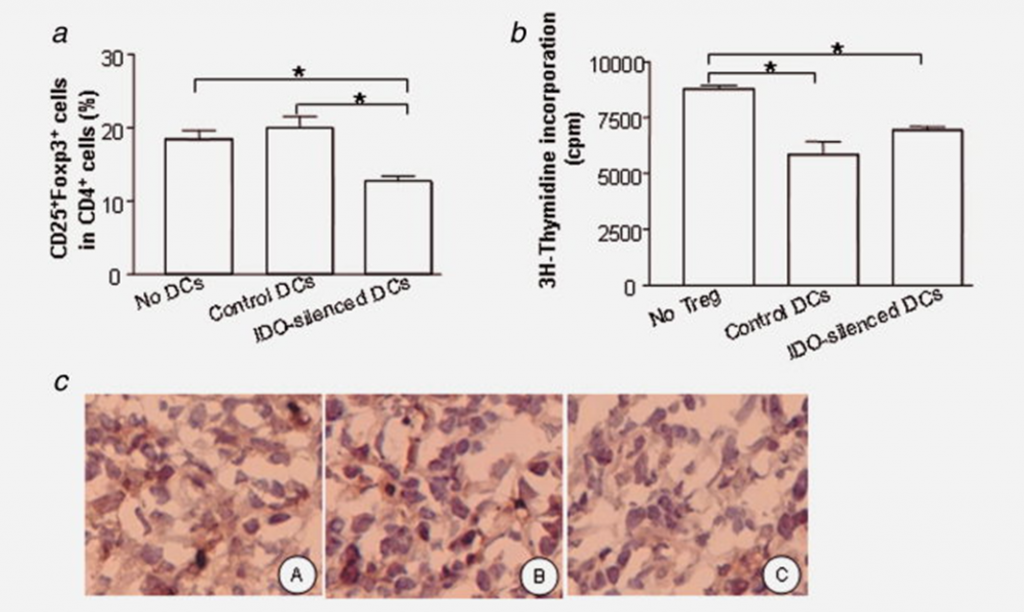 Silencing IDO limits Treg cell generation in vivo. (a) Percentage of Treg population in CD4+ T cells from tumor draining lymph nodes. Tumor draining lymph node cells were isolated from tumor-bearing mice treated with IDO-silenced DCs or control DCs, as described in the legend to Figure 4, triple-stained with Abs against CD4, CD25 and Foxp3, and Ab binding assessed by flow cytometry. The percentage of CD25+Foxp3+ cells among cells first gated for CD4+ status was calculated. Data are pooled from three independent experiments (p < 0.05, one way ANOVA analysis). (b) Inhibitory function of Tregs: CD4+CD25+ cells were isolated from the mice as described in (a) and Material and Methods. Isolated CD4+CD25+ cells were added to an ongoing tumor-Ag specific T cell response assay, in which T cells isolated from breast cancer-bearing mice were used as responder cells in the presence of 4T1 tumor cell lysate and naïve DCs as antigen presenting cells. Representative data from one experiment of three are shown (n = 3 per experimental group in each experiment; *p < 0.05, One way ANOVA analysis). (c) Foxp3+ cell infiltrating into tumor tissue: Tumors were excised from non treatment group (A), treatment with control siRNA transfected DCs (B), and with IDO-silenced DCs group (C). Frozen tumor tissue was sectioned and stained with anti-mouse Foxp3 Ab. Tissues were visualized microscopically (×200 magnification).

The company then showed that treatment of mice with breast cancer tumors resulted in enhanced anti-tumor effects. 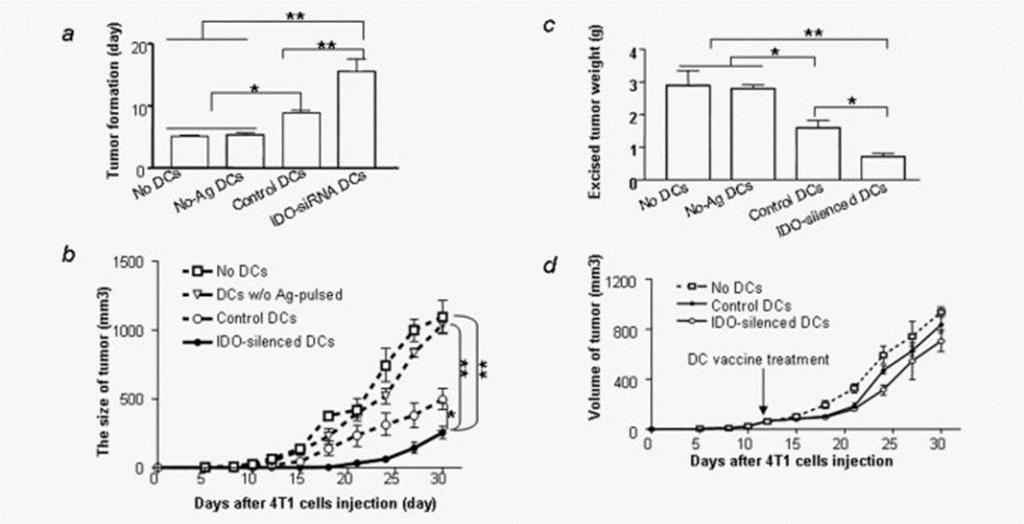 We’ll see what happens in the clinical trials. If activity is seen, I think it would be interesting to combine this with antigen loading (as with Provenge in which autologous dendritic cells are pulsed with a fusion protein of PAP – prostatic acid phosphatase – and GMCSF).