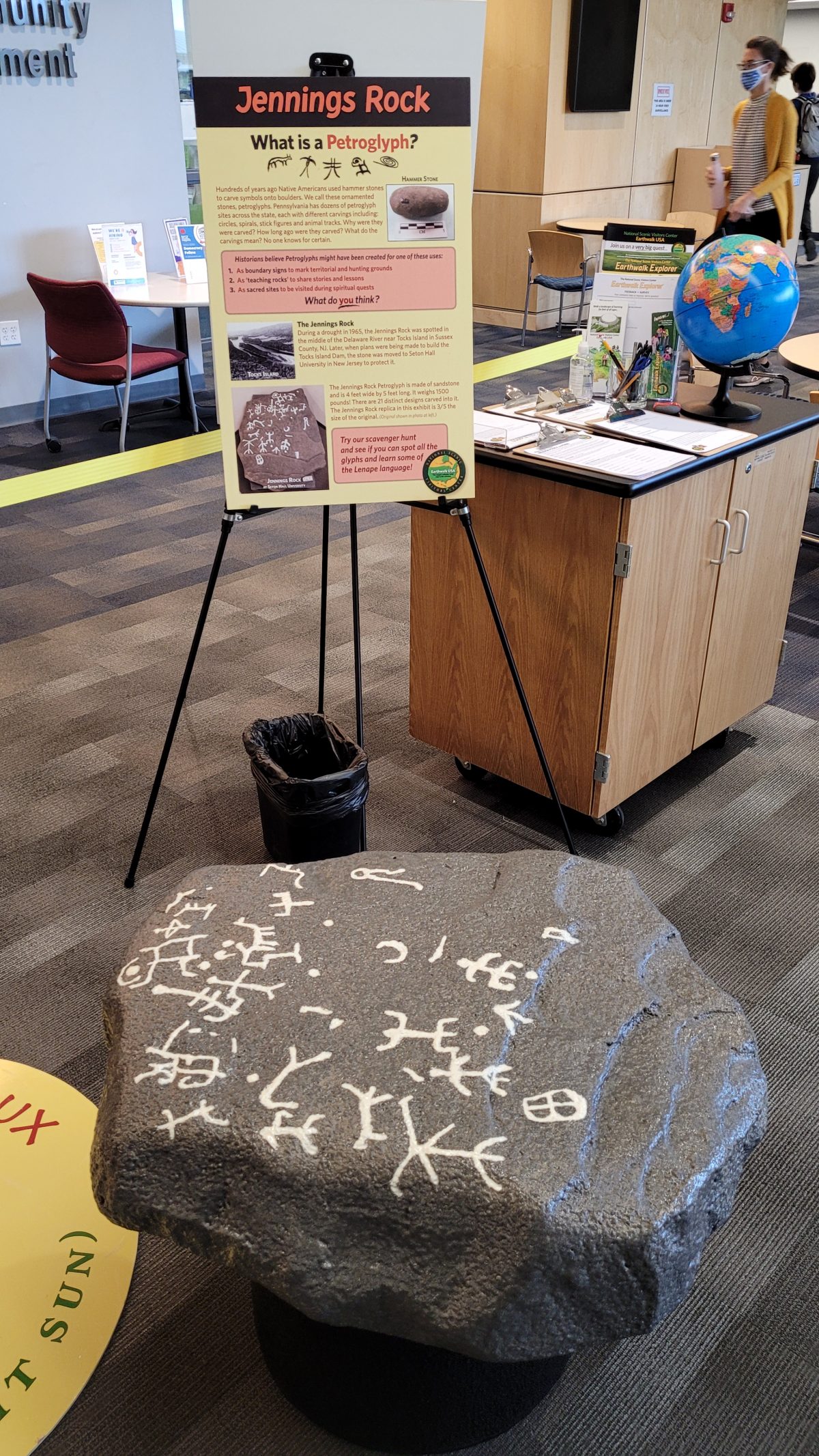 On the second floor of the Walsh Library is a rare petroglyph – a prehistoric rock carving – made between 3000-1000 B.C.E. The petroglyph generates numerous research requests each year due to its unique nature. One of those requests was made by the National Scenic Visitors Center/Earthwalk USA of Zionsville, Pennsylvania for their Earthwalk Explorer multi-media interactive exhibition.  They requested a visit to the petroglyph to do a 3D scan which was written about in a previous blog post roughly two years ago.

This traveling exhibit pairs maps, topography, history, culture, written and spoken language and storytelling in an immersive experience that projects videos onto a topographical map of the East Coast of the United States.  The looped video begins by revealing the original Lenni Lenape trails that eventually became the highways and busy roads we use today; facets of Lenape history and culture, and other fascinating information about the region’s forests, parks and borders.  The National Scenic Visitors Center worked closely with Chief Demund of the Lenape Nation of Pennsylvania who offered this blessing which opens the video program:

Adjacent to the exhibit is an activity area featuring a reproduction of the petroglyph. Visitors learn about the glyphs – their conjectured meaning, what they depict and how the words are pronounced in Lenape. The project relied on the Lenape Talking Dictionary for some of the interpretations. Professor Sean Harvey of Seton Hall University discussed the petroglyph’s significance in a video produced last year for Native American Heritage Month.

The petroglyph was located on Rudyard Jennings’ property along the Delaware River in Walpack Township, New Jersey until 1968 when it was moved to Seton Hall University by Herbert Kraft, a field archaeologist specializing in Lenni Lenape people and culture.  Kraft was also a renowned professor of Anthropology and Archaeology at the university.  At the time of the move, Kraft sought to preserve the petroglyph which was at risk due to a plan by the Army Corps of Engineers to dam the river which would have flooded the area: submerging the petroglyph. Plans to build the Tocks Island Dam were never realized, but the petroglyph had already been moved by the time the project was abandoned.  The petroglyph is the only one discovered along the Delaware River, making it a unique resource that offers tantalizing glimpses into the life and values of the Lenni Lenape people.

Gallery Director Jeanne Brasile recently visited the Earthwalk Explorer which is on view at Northampton Community College in Easton, Pennsylvania to see how the petroglyph was integrated into the exhibit and interpreted for visitors.  Brasile met with Mary Ellen Snyder, Executive Director of the National Scenic Visitors Center and Amy Hollander, Strategic Consultant at Delaware and Lehigh National Heritage Corridor who developed the educational programs and much of the content.  Joining them were two student docents, Alexander Almonte and Alejandro Zuniga who enthusiastically and expertly guided the experience for visitors.  Almonte described how his interest in GIS (a computer system for capturing, storing, checking, and displaying data related to positions on Earth’s surface) and geography drew him to this work but the exhibit also stirred more of a connection to his own lineage which is partly indigenous Peruvian on his mother’s side.  The exhibition uses the concept of geography and topography as a jumping off point for discourse on issues such as colonialism, land stewardship, respect and migratory patterns.