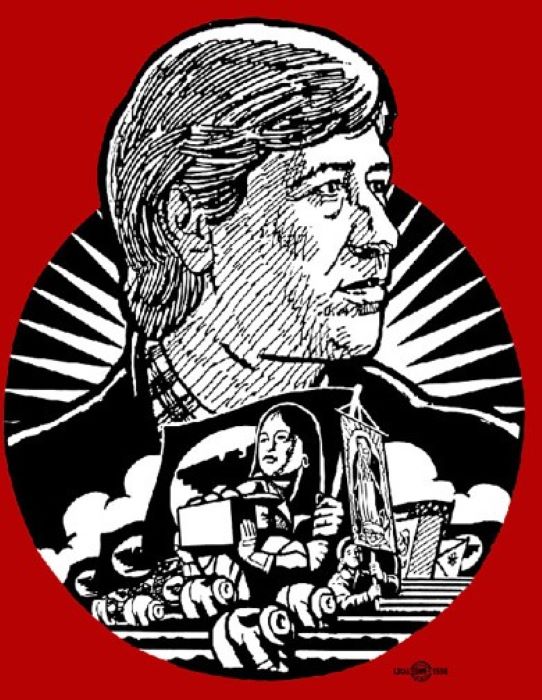 Counted among the most important figures in the history of labor relations and human rights advocacy is Cesar Chavez whose legacy remains alive through continual study and application of his principles on behalf of the migrant farm community and other disenfranchised Latinos in particular.  As part of an ambitious plan, Mr. Chavez founded the United Farm Workers of America (UFW) in order to bring awareness and advocate for fair working conditions, collective bargaining opportunities, competitive wages, and seeking fairness and respect for all farmers who were in need of support.  The following highlights taken from the UFW biographical overview produced by the UFW provides a brief overview on the life and accomplishments of Mr. Chavez which would lead to his wide-spread appeal which became global including Seton Hall on a local level.

Cesar Estrada Chavez (1927-1993) was born in the vicinity of Yuma, Arizona.  In 1938, his family re-located to California where they briefly resided at the La Colonia Barrio in Oxnard prior to moving back and forth between his home state and California where the family settled in San Jose by June of 1939, but would soon live in a series of towns including Brawley, Atascadero, Gonzales, King City, Salinas, McFarland, Delano, Wasco, Selma, Kingsburg, and Mendota.

In addition to his moving from place to place, Mr. Chavez was discriminated against as a youth especially as a Latino who attended primarily English-language grade school where racist remarks, discriminatory practices, and the linguistic barrier led to an unbalanced experience in the classroom.  Mr. Chavez made it through the eighth grade but dropped out to become a migrant farm worker during the 1930s through the early 1940s. Despite not having a formal education beyond middle school, Mr. Chavez was well-read and studied a vast range of subjects and believed that: “The end of all education should surely be service to others.”  Counted among his early inspirations were St. Francis of Assisi and Mohandas Gandhi who both taught non-violence as a means of achieving justice for others.

By 1946, Mr. Chavez enlisted in United States Navy and served for two years prior becoming a civilian and at this time he married the former Ms. Helen Fabela and at first lived in Delano, California and together were parents to eight children over the course of their lives together.

Mr. Chavez became more interested and active in civil rights during the late 1940s and 1950s and offered to assist with voter registration as part of his local California-based Community Service Organization.  From this starting point, he founded the National Farm Workers Association (later known as the UFW) in 1962.  Counted among his co-founders and long-time allies were Ms. Dolores Huerta and his brother Mr. Richard Chavez.  Their core group of supporters were grape farmers, but this soon spread to those who harvested other fruits and vegetables which resulted in 50,000 dues paying members by 1970.

As part of the La Causa “The Cause” movement, the most iconic and effective  forms of non-violent resistance initiated by Mr. Chavez included the Delano Grape Strike (1965-70), a 340-mile March for Civil Rights from Delano to Sacramento (1966), and a number of fasts in protest of sub-standard worker conditions including those of: 25 days (1968), 24 days (1972), and 36 days (1988) for example.  These demonstrations were also complimented by a number of product boycotts, picketing, and other means of non-violent protest to draw attention to those who were exposed to unfair treatment and in need not only vocal, but also legal and political support.

Mr. Chavez passed away near Salinas, California on April 23, 1993.  It is estimated that this was the largest funeral conducted for any labor leader in United States history to date.  The following year, Mr. Chavez was posthumously awarded the Presidential Medal of Freedom for his lifetime of advocacy work on behalf of others and as U..S. President Bill Clinton noted in the accompanying citation: “The farm workers who labored in the fields and yearned for respect and self-sufficiency pinned their hopes on this remarkable man who, with faith and discipline, soft spoken humility and amazing inner strength, led a very courageous life.”1

The work of Mr. Chavez had been long known by those on the Seton Hall University campus through media reports that chronicled activities on the West Coast to a national audience including our student body, faculty, and administration. The Monsignor William Noé Field Archives & Special Collections Center has worked with the public on research projects related to the Latino community including primary source documentation connected to the Unanue Latino Institute and their celebration entitled: “The Catholic Symbolism of Cesar Chavez” in 2019.  This which resulted in an overview of the event and connections that he and other members of the UFW had to Seton Hall was researched and written by Adam Varoqua. Counted among the main features that marked the connection between Mr. Chavez and our school go back to the founding date of the Puerto Rican Institute (now known as the Unanue Institute) in 1974.

By 1974, the first Seton Hall-sponsored Migrant Symposium was created through the efforts of University President Monsignor Thomas Fahy who was an active supporter of the UFW along with a variety of other social justice related issues. He noted that: We are happy to express solidarity with the aims of Cesar Chavez and the United Farm Workers.”  Monsignor Fahy also worked with Archbishop Peter Gerety and other clergy within the Archdiocese of Newark and across the region to help with advocacy on behalf of Mr. Chavez and his mission. Their work also extended to working with state legislators such as Assemblyman Byron Baer who introduced a bill to aid farmer workers in New Jersey later that year.2

Mr. Chavez invited to provide the keynote address, but due to medical issues could not attend.  His proxy was Ms. Dolores Huerta who was also a top official within the UFW and was an honored guest then and also when revisiting campus in 2019 to discuss what progress had been made regarding the rights of Latinos and migrant famers over the last four decades since she last came to South Orange.

Over the course of his life and into the present day, the work of Mr. Chavez has also been included as part of various History, Labor Studies, Diplomacy, and Latino-centered courses at Seton Hall.  Interest continues not only in regard to the life and work of Cesar Chavez, but Dolores Huerta, UFW, and the Unanue Latino Institute at Seton Hall.  Along with materials found in our Vertical Files, Office of Public Affairs Clipping Files, Setonian Newspaper, Seton Hall Yearbooks – https://scholarship.shu.edu/yearbooks/ and other resources found within our repository are available for research project consultation.  Additionally, the  following resources are available within the University Libraries and the Monsignor William Noé Field Archives & Special Collections for review.

Thomas G. Fahy was the fifteenth President of Seton Hall University and oversaw significant physical growth as well as progress in equal access to education for minorities, improved governance, and student affairs during his tenure as president. The Office of the President and Chancellor: Thomas Fahy records include materials generated and gathered by Monsignor Fahy during his time as President of Seton Hall University.

(Named in honor of Cesar Chavez, but covering a wide range of Multi-Cultural subjects and themes)

UFW and the Story of Cesar Chavez – https://ufw.org/research/history/story-cesar-chavez/

For more information about our resources and to schedule an appointment to view our resources please feel free to contact us via e-mail: Archives@shu.edu or by phone at: (973) 761-9476.