May Day is observed in various celebratory ways and this is no different within the Catholic Church as this diurnal it is a starting point for month-long devotions to the Blessed Virgin Mary across the globe.  Counted among the most evident displays of homage include the annual “May Crowning” of Mary statues found within churches worldwide, creation of art works depicting the image of the Holy Mother, increased prayers, group recitations, and other means  homage that invoke and honor her name and example. This increase in commitment to Mary has been nurtured over time especially from the 18th century forward.  Within the Pre-Vatican II era, the official pronouncement of the “Queenship of Mary” and her connections to May as a time of greater ceremony came in the Marian Year of 1954 when Pope Pius XII (1876-1958) made in his encyclical – Ad Caeli Reginam.  This inspired an oft-recited hymn that reads – “Hail Virgin, dearest Mary! Our lovely Queen of May! . . . ”

Mary herself was a Nazarean who lived in the 1st century BC and is known according to New Testament texts as the mother Jesus Christ by way of conceiving miraculously through the Holy Spirit.  The Mother of God was assumed into Heaven after her mortal life ended and her example has led to several assertions that she has appeared in miraculous fashion to different followers over the years.  This has led to Mary being the most venerated and admirable of all saints to most within the Catholic Church. 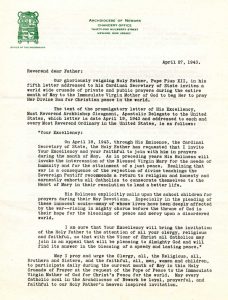 The example of Mary served the faithful not only in times of peace, but especially in times of turmoil.  A decade before the “Queenship of Mary” was formally established, and as the Second World War raged, Vatican Secretary of State Cardinal Amleto Giovanni Cicognani (1883-1973) reached out to the American hierarchy on behalf of Pius XII to encourage focused prayer during the month of May.  In particular, he made special note of all to call on the intercession of the Blessed Virgin Mary in helping all people to lead a true life and to always remember – “. . . the needs of humanity and for the attainment of a just peace . . . at this time of conflict across the world.”  In response to this request, Archbishop Thomas J. Walsh (1873-1952) asked the faithful of the Archdiocese of Newark to not only participate in daily contemplation, but engage in the Holy Crusade of Peace as a means of honoring the Solidarity of Mary.  This was a means of joining the call of the Vatican in other shows of spiritual commitment on a daily basis as outlined in the April 27, 1943 circular letter illustrated on this page. 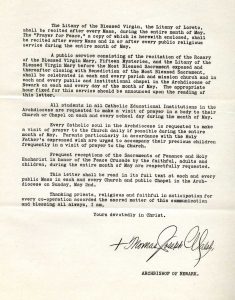 Archbishop Walsh also expressed the wish that the Litany of the Blessed Virgin, Litany of Loreto (a special Marian-centered prayer first uttered in 1587), and the “Prayer for Peace” (found below) each be read after each Mass throughout the month of May. 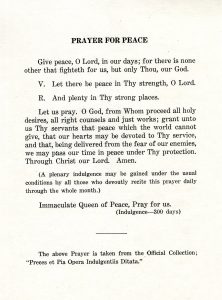 In addition, further demonstrations of faith included public services that featured the recitation of the Rosary of the Blessed Virgin Mary and honoring the Mother of Christ with a Benediction of the Most Blessed Sacrament at each parish and mission chapel throughout the Archdiocese of Newark.  Additionally, in accordance with the hope that the Catholic youth of the Newark See would be more active in spiritual exercises of this type, it was requested by Archbishop Walsh that students make a devotion to their nearest church every school day in addition to worship on Sundays.

This circular was read to parishioners at each parish throughout the Archdiocese of Newark during Masses conducted on Sunday, May 2, 1943.  In looking back 75 years later, this devotion to Mary shows how the words of the hierarchy and enlistment of the faithful helped in making peace a reality and further strengthened belief in the Blessed Virgin and her example through continued dedication throughout the month of May and even beyond.

For more information on Marian traditions, Archdiocese of Newark history, and other research subjects please feel free to contact at: Alan.Delozier@shu.edu / (973) 275-2378.