When looking back at the world one hundred years ago, fighting had ceased to end the “Great War” and the United States proper was returning to a time of peace and budding prosperity.  Counted among the highlights of 1918 included the hope for creating a unified League of Nations to ensure world peace as advocated by President Woodrow Wilson. The creation of distinct time zones along with daylight savings time was enacted via the United States House of Representatives, and also watched was a continuation of the Progressive Era that featured  increased social, economic, and labor reform measures all marked this transitional period in the American experience.

In South Orange, Seton Hall College was in the midst of its sixty-second year of operation and played host to a student body numbering 87 during during the 1917-18 academic year (down from 105 the year before and rising to 96 by the Fall of 1918 most likely caused by enlistments with the American Expeditionary Forces [AEF] during World War I) with another 106 enrolled in the prep division and 54 seminarians on-site.  These individuals encountered a school year consisting of two terms of five months apiece beginning in September that ended by June of the following calendar year.  The Christmas recess was twelve days long and a week without classes was also provided for Holy Week and Easter much like the scheduling of today. 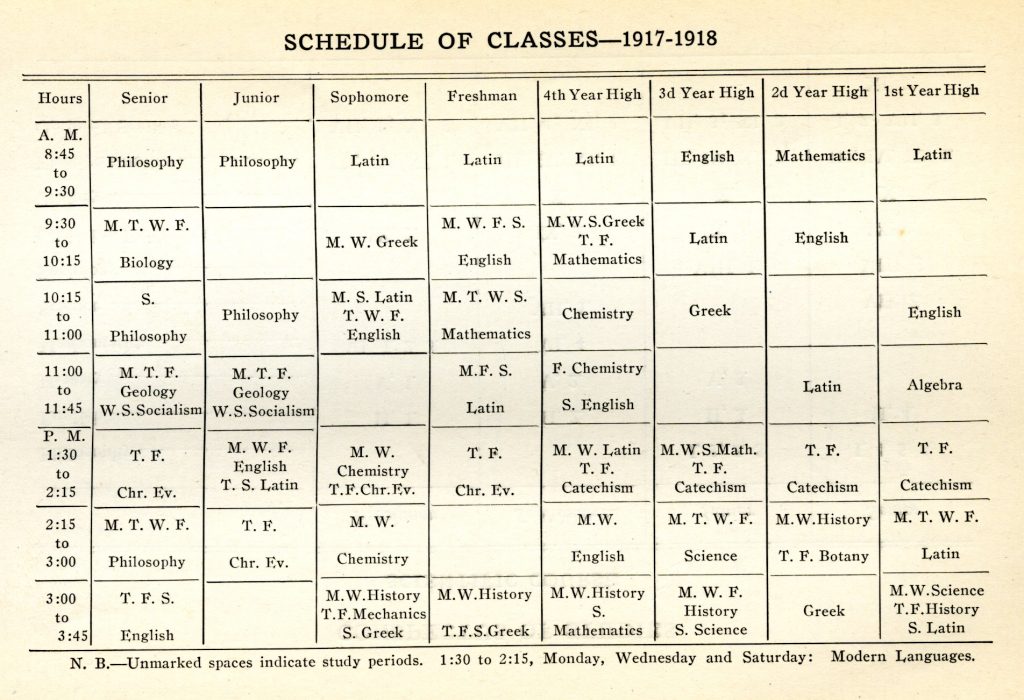 Administratively, the school was headed by the Right Reverend John J. O’Connor, D.D., Bishop of Newark (1901-1927) and Head of the Board of Trustees and the Right Reverend Monsignor James F. Mooney, D.D., LL.D., President of the College who had one of the longest tenures as chief executive in school history serving as leader from 1907-1922.

When it came to defining aspects of building community and academic standards, the administration made sure the institution had its own guidelines that were followed closely by the Setonians of 1918.  This included recognition of the organization scheme for the school which was outlined in the following manner . . .

“Seton Hall at present consists of Seton Hall College, Seton Hall High School, Bayley Hall Grammar School and the Theological Seminary of the Diocese of Newark.  The College prepares for the degrees of Bachelor of Arts and Bachelor of Science.  The High School prepares for either the Classical or the Scientific Course of the College. Bayley Hall offers thorough instruction in the last three grades of the grammar school course.  The Theological Seminary prepares candidates for the priesthood and gives a four years’ course in theology and the other Sacred Sciences.”

The ideals and overall goals for the school and its student body were summarized in the following manner . . .

“The aim of Seton Hall is to impart a good education in the highest sense of the word – to train the moral, intellectual and physical being.  The mere imparting of knowledge is looked upon as but a small part of the work of the institution.  The training of the heart and the formation of character under the guiding influence of Christian principles, the development of the intellectual faculties, the encouragement and guidance of laudable ambition, the acquisition of habits of logical thought, correct methods of study, self-discipline and refinement, the realization, in a word, of the highest ideals of excellence in the cultured Christian gentleman – these are the ends that Seton Hall keeps steadily in view in the arduous and sacred office of educating youth.”

Another aspect of the collegiate life that appealed to the student body was its location within the densely populated suburbs of Newark and within manageable travel range of Gotham.  The following description of the campus and its environs was outlined in the following manner . . .

“The College is situated in the village of South Orange, N.J., on the line of the Delaware, Lackawanna and Western Railroad, fourteen miles west of New York City.  No more healthful and inviting site could be chosen for the College buildings, situated as they are in full view of the Orange Mountains, on high ground and surrounded by fine shade trees and well-kept laws that afford charming fields for recreation and sport.  The College property embraces about seventy-five acres.  The buildings are grouped together in a natural surrounding that makes Seton Hall one of the most attractive sites in the State.”

When it came to actually “educating youth,” the student of 1918 had the choice of following a “Classical” or “Scientific” course of study which entailed more of a liberal arts or naturalistic path of research respectively.  Please consult the illustrations for more details on the overview of each major . . . 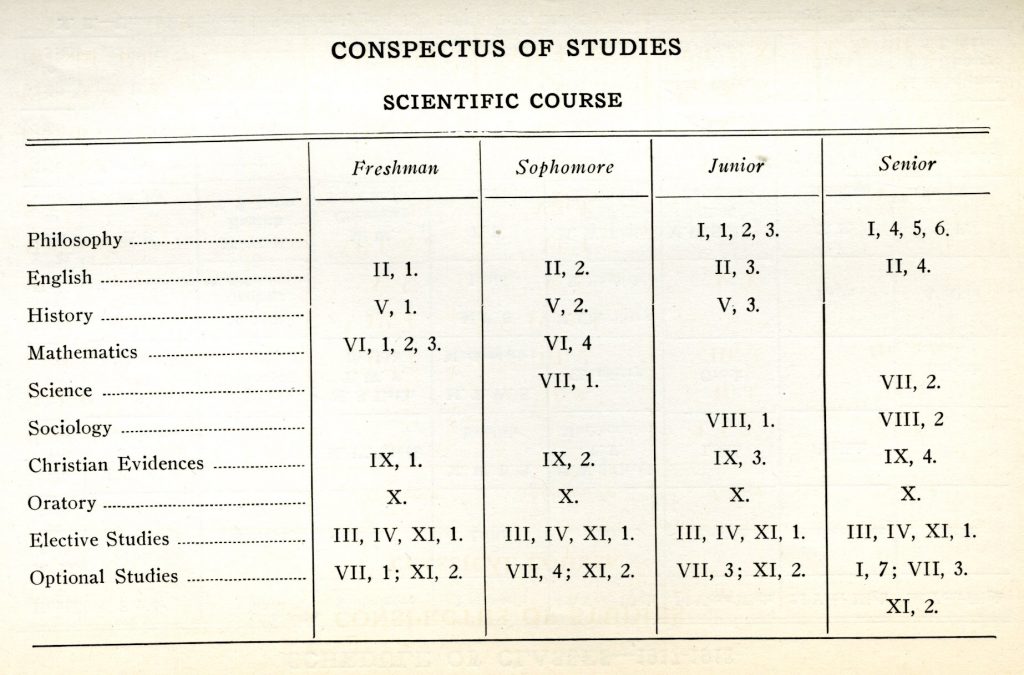 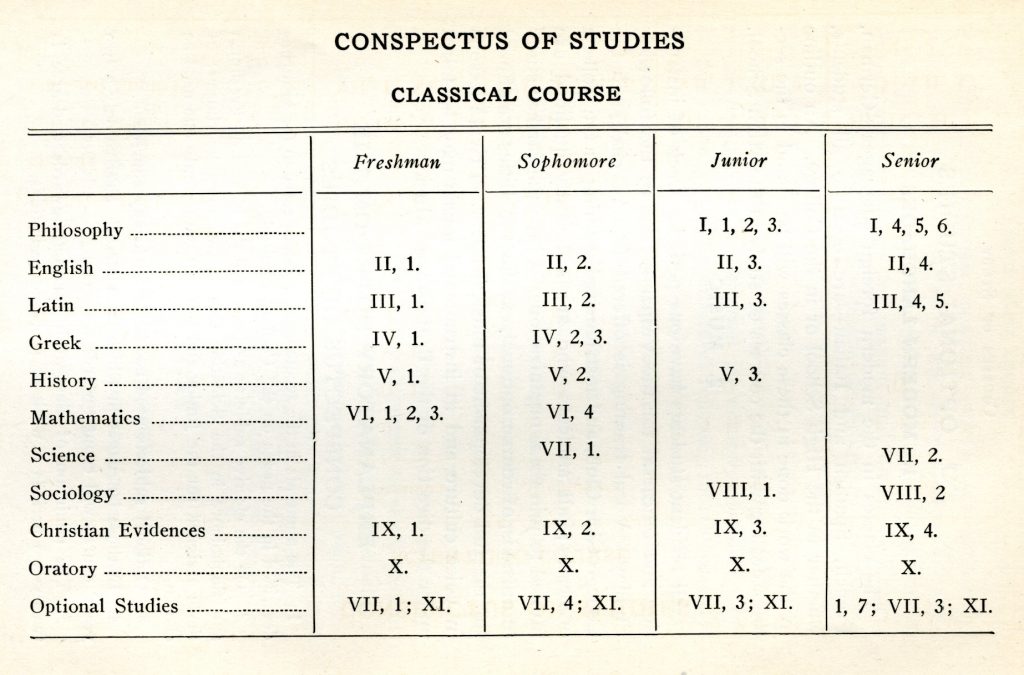 Otherwise, the cost of education was also a concern especially to the parents and sponsors of students attending Seton Hall in an age of low wages and pre-inflation pricing which is highlighted here.  The following details show what a Seton Hall student of 1918 usually paid yearly . . .

As with the student of today, those who attended Seton Hall during the teens contributed to the development of school life and left a legacy that continued through the last several decades as higher education and society within South Orange and on a global scale alike.  In providing a prelude to the students of today regardless of what time zone they hailed from, the students of 1918 also echoed the school motto of “Hazard Zet Forward” as part of the Seton Hall legacy that continues to this day.

For more information about this, and other periods in Seton Hall history please feel free to contact University Archivist, Alan Delozier – Alan.Delozier@shu.edu / (973) 275-2378.