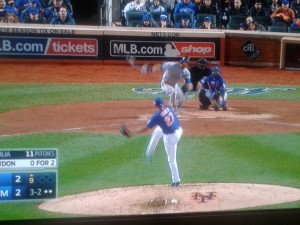 If boxing is the cruelest sport (it is), then baseball is, perhaps, the most excruciating. In the middle of July in the midst of a 162 game season it is excruciating in the sense that it seems as though it will never end: the teams trudge through summer in a schedule designed for attrition.

In September and October, with the playoffs at hand, it is excruciating because it will end – or could end – with the very next pitch.

With the drama distilled and rolled up into a little ball – focused and traveling at 97 mph— there is nothing quite like a full count on a batter with the game and maybe the entire season on the line. Nothing quite like a playoff game (never mind a World Series game) when your team is playing, and almost every pitch feels that way. The entirety of a year’s work (pitchers and catchers report in February) resting on and rolled into a series of moments—the next moment.

It waits. And in that waiting, that time before the crack of the bat and the roar of the crowd, lies the beauty of baseball: an anticipation, a dread even, that has built to a fine point over a period of a year—or decades, or 107 years if you’re a Cubs fan.

Nearly unbearable at times, playoff baseball is, in short, dramatic.

And this has been, by almost all accounts, the most exciting World Series in years. But relatively few people are watching.

@MJRicciardelli @MLB @FOXSports @WorldSeries ” a regular season NFL game is preferred over a World Series game by a 48%-36% margin.”

That’s a shift in differential from 34 to 12% — with an effective upward movement for baseball of 22 points.

That, coupled with a Game One this year that had the highest TV ratings for a World Series game in 5 years, represents a strong gain for Major League Baseball.

But as Jason Notte notes in his article at Marketwatch: “This is the most exciting World Series no one is watching,” viewership for baseball’s biggest games is decidedly lackluster in comparison with its own illustrious history and, contemporaneously, other sports. He also notes that “baseball has problems with demographics and how playoff games are broadcast.”

He is right. As Rich Hoffman, Sports Editor at the Philadelphia Daily News posits:

But there’s hope. I watched game 4 on Saturday night with my girlfriend’s 17 year old son. He is not a baseball fan. He plays the guitar, works on cars, spends an inordinate amount of time on his phone and watches football and basketball. We rooted for the Mets. As the game progressed and I cheered and cursed in turn, he turned to me and said, a number of times with a big smile on his face: “I can’t believe how exciting this is. It’s soooo tense. I don’t know what to say.”

But there is a question to be asked: With a product that good, how didn’t he know? What is MLB’s marketing strategy for people who aren’t “about the average age”?

Notte concludes: “Baseball has gone from a national pastime to a niche, and neither it nor its World Series are going to work their way back until they become more accessible.”

I’m not sure niche is quite the right word here. Boxing is niche. I’ve written about boxing for The Guardian, 15Rounds.com, Queensbury Rules (named a Top 25 blog by Time magazine, but you’ve almost certainly never heard of it), the Daily Record and the Asbury Park Press. When I look for boxing news and go to a general sports source such as ESPN.com, BleacherReport or SBNation, my sport is listed under “Other” or “More.”

Baseball still holds a place in the header, but Notte has a point— and MLB should listen, and build upon the tenuous gains it’s made— or risk finding itself relegated in the popular consciousness and sports pages to “Other.”