South Orange, NJ, October 29, 2015 — Despite ongoing investigations by the Justice Department and the FBI into whether daily sports fantasy games are a form of gambling, the American public is divided on whether commercials for those sites should be appearing in televised sports events.

A Seton Hall Sports Poll conducted this week (Oct. 26-28) among 820 random adults across the country by landline and cellphone, found that 41% felt they should be able to advertise and 39% felt they should not. (20% said they did not know.)

The poll has a margin of error of 3.5%, making the result a statistical dead heat.

“The ads from DraftKings and FanDuel are ubiquitous,” noted Rick Gentile, director of the Poll, which is sponsored by The Sharkey Institute. “They are definitely a new and impactful part of the sports landscape. It happened, seemingly, overnight. But there is certainly no hard push-back by viewers about running these ads.

“It seems to harken what {N.J.} Governor {Chris} Christie said in the debate last night about playing fantasy sports as an issue – ‘really?’”

Only 4% of respondents said they participated in a baseball fantasy game.

The Poll also asked if sponsors who promote products (such as fantasy sports), in an environment where its athletes are forbidden to participate (college athletes may not gamble), should not be allowed to advertise on any college sports. By 59% to 34%, respondents said they should not. A similar margin – 56%-36% – felt that beer advertising should not appear on college sports telecasts.   (It currently does). The Poll also noted that the NCAA has said the ads will not run during their college basketball tournaments, and 47% felt that was a good decision, versus only 30% saying it was a bad decision. (23% did not know).

END_OF_DOCUMENT_TOKEN_TO_BE_REPLACED

South Orange, NJ, October 29, 2015 — The World Series, which will go head-to-head against the NFL this Sunday (if a fifth game is necessary), has shown strong growth in such a match-up in the opinion of the American public, according to a Seton Hall Sports Poll conducted this week.

While a regular season NFL game is preferred over a World Series game by a 48%-36% margin, when Seton Hall asked the question five years ago, the NFL margin was 56%-22%. That is a shift from a 34% to 12% differential, and seems to match the ratings for Tuesday night’s Game One of the World Series, which was the highest in five years.

There were no clear differences in the percentages based on whether a baseball or a football game was being played on the day the question was asked.

“This is a strong trend for baseball,” noted Rick Gentile, director of the Poll, which is sponsored by The Sharkey Institute. “Despite the absence of household name stars in this year’s Kansas City-New York Mets matchup, the public is finding the games compelling.”

The Poll was conducted this week (October 26-28) among 820 random adults called on landlines and cellphones across the country. There is a margin of error of 3.5%.

Asked which they expected to be more competitive, the World Series or the political debate, 49% said the debate and 41% said the World Series. (The vast majority of respondents answered prior to the airing of the debate on CNBC, which began at 8 pm eastern time on the final day of polling).

59% said it didn’t matter if a baseball player acts out with a demonstrative gesture in a game (such as a bat flip or a pitcher’s gesture after a strikeout). 17% felt that was good for baseball and 15% said it was bad for baseball.

Although there are growing varieties of ways to watch sports, 83% still choose television and 7% choose “in person,” leaving only 5% who usually watch streaming video and 5% “other” or “none.” Streaming video was launched back in 2000 when Rick Gentile produced the Paralympic Games from Sydney, Australia for WeMedia, but now, 15 years later, it remains a small piece of the viewership pie.

Good news for billboard sponsors – 44% of respondents said they pay attention to sponsor signs in the stadium. Asked if they are more or less likely to purchase a product they see sponsoring sports events, only 9% said more likely and 85% said “no difference.” (Advertisers would surely dispute this finding). 6% said they would be less likely.

END_OF_DOCUMENT_TOKEN_TO_BE_REPLACED 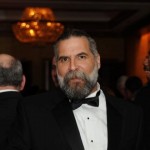 The aftershock of the prolonged debate over “Deflategate,” which resulted in Tom Brady’s suspension over deflated footballs being overturned in judicial proceedings, has crushed the popularity of those involved.

-Commissioner Roger Goodell, who had rebounded from a 12% favorable rating a year ago after his Ray Rice decision to 24% at the conclusion of the Super Bowl, fell back down to 14% favorable.

-Brady himself fell from 61% to 34% favorable since his winning Super Bowl performance.

-Coach Bill Belichick fell from 38% to 21% favorable in the same seven months.

Brady’s counterpart, the ever-popular Peyton Manning of Denver, remains consistently high, with a 61% favorable rating, almost double Brady’s, and right where he has been since the question was first asked in November of 2010.

“Winning a court decision is not the same as winning back the hearts of the fans,” said Gentile. “They have a long way to go.”

This is the year that American sports fans have become accustomed to seeing advertising for fantasy sports games (involving the selection of players), while viewing live sports. While sports long embraced a “No Betting” concept with fans, the operators of such companies as DraftKings and FanDuel persuaded regulators that their games were games of skill, not gambling per se.

But the American people are not buying that argument. According to a Seton Hall Sports Poll conducted this week, 52% of Americans believe them to be a form of gambling, with only 31% believing them to be games of skill. The margin remains the same among categories of respondents that should know the difference: those that have gambled before, participated in fantasy sports and even those that paid money to participate in fantasy sports, with all categories saying it is a form of gambling by a range of 50-54%.

By a margin of 41% to 47% against, people are saying that these games should not be advertised during live sports coverage, though this is not as one-sided as the 29% to 59% that are against advertising gambling on the direct outcome of the games themselves.

“To see the influx of these fantasy games is a remarkable milestone for sports, which has always taken such a hard line on gambling,” noted Rick Gentile, director of the poll, which is sponsored by The Sharkey Institute. “No betting signs were always prominent at ballparks. And now this.”

The Seton Hall survey found that 19% of respondents have participated in a fantasy league, a daily fantasy or both, while 13% have participated in the last 12 months. This is almost a threefold increase compared to February 2006 when 5% gave an affirmative answer in the Pew Social Trends Poll.

“This topic figures to remain an important one in the sports universe for the foreseeable future,” said Gentile.