The results of two studies have demonstrated that the use of temozolomide (TMZ) plus radiation increases disease-free and overall survival in patients with glioblastoma and a low grade glioma called anaplastic glioma.

TMZ  is an oral alkylating agent, first developed in the early 1980s at Aston University in Great Britain. The proposed mechanism of action is based on the ability of its metabolites to deposit methyl groups on DNA guanine bases. After oral administration, the prodrug TMZ is readily absorbed in the small intestine, with good penetration of the blood-brain barrier due to its small size (194 Da). It then undergoes spontaneous intracellular conversion via hydrolysis into a potent methylating agent, MTIC (methyl triazeno imidazole carboxamide). MTIC methylates a number of nucleobases, most important, the guanine base. This results in the formation of nicks in the DNA, followed by apoptosis, because cellular repair mechanisms are unable to adjust to the methylated base (Fig 1).

How does TMZ work? 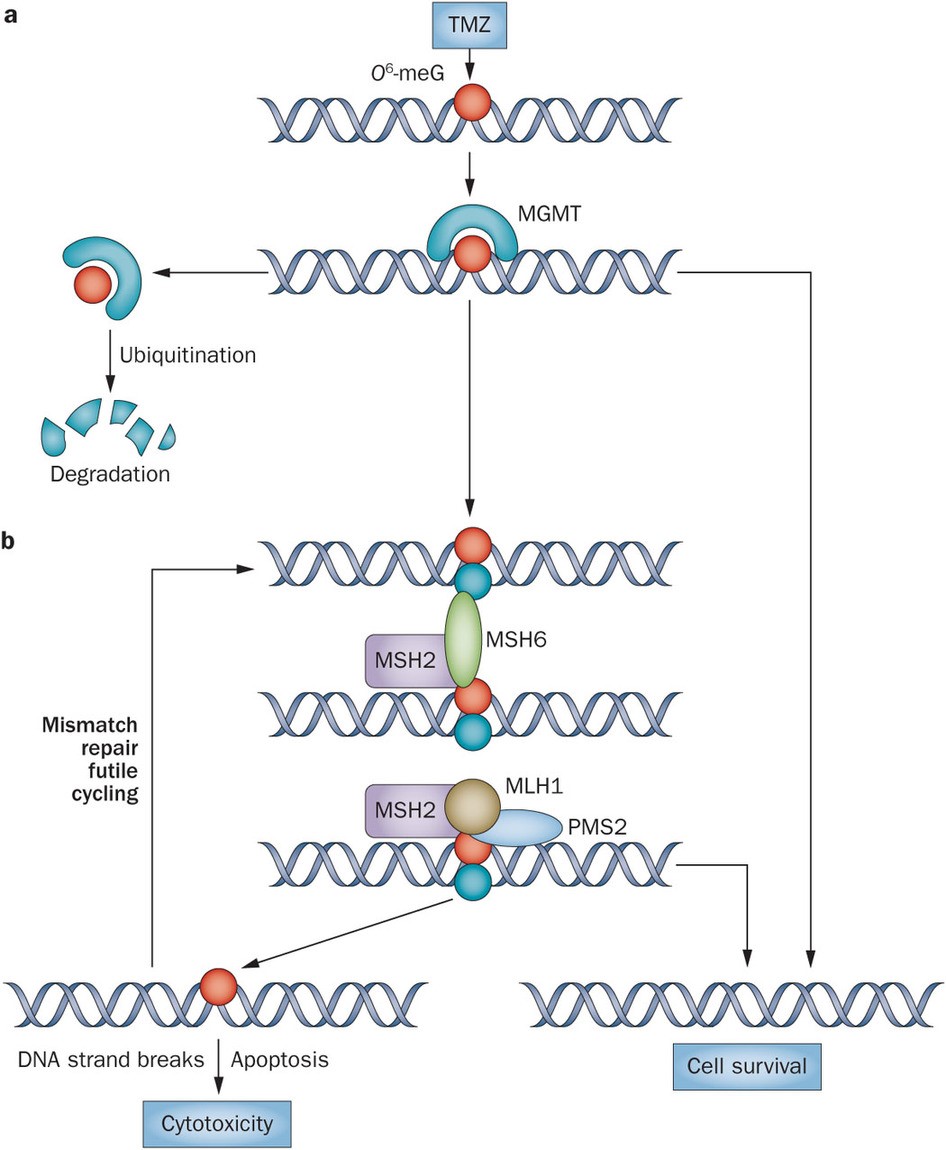 Figure 2. The alkylating chemotherapeutic agent TMZ can cause potentially cytotoxic DNA modifications such as conversion of guanine to O6-meG (red circle), which are corrected by MGMT protein. a | MGMT sequesters the methyl group from O6-meG via covalent transfer, thereby restoring the guanine to its normal state. This process leaves MGMT irreversibly inactivated and subject to ubiquitin-mediated degradation. b | If an O6-meG DNA adduct is not repaired by MGMT—for example, because of low protein expression by epigenetically silenced MGMT—O6-meG forms a base pair with thymine (blue circle) during DNA replication. The mismatched O6-meG–thymine base pair is recognized by the mismatch repair pathway (which includes the MLH1, MSH2, MSH6 and PMS2 proteins), potentially resulting in futile cycles of repair and leading to cell death. Abbreviations: MGMT, O6-methylguanine-DNA methyltransferase; O6-meG, O6-methylguanine; TMZ, temozolomide. http://www.nature.com/nrneurol/journal/v10/n7/fig_tab/nrneurol.2014.100_F1.html

What are the latest clinical results with TMZ + RT?

Clinical results of radiotherapy and TMZ in patients with newly diagnosed glioblastoma.

Note that the radiotherapy arms performed similarly with respect to overall survival in patients with and without methylation of the MGMT promoter (7.7 vs 7.6 mo, respectively). this demonstrates excellent internal validity of the study and statistical analysis, and tells us that the mechanism of action of radiotherapy is not methyl adduct forming.

Radiation therapy has been commonly used as the standard treatment for brain tumors.. It employs controlled high energy rays such as x-ray and γ-ray to either kill cancer cells directly or interfere with their ability to grow. Radiation can be given by either external or internal means; external radiotherapy is a critical component to treat brain tumors in many patients. For example, stereotactic radiosurgery delivers a high dose of radiation during a single session from an external source, such as gamma knife and linear accelerator (LINAC), to treat brain tumors. What is the mechanism of action of radiotherapy in brain cancer? Radiation therapy causes double-strand breaks in DNA that must be repaired for tumors to keep growing.  Two major pathways that are used to repair DNA breaks — non-homologous end joining (NHEJ) and homologous recombination (HR). Enzymes involved in cell division called cyclin-dependent kinases (CDKs) activate HR by phosphorylating a key protein, EXO1.

Why are the responses short-lived?

As seen in the glioblastoma study summarized in the table, above, the best responding patients, those with MGMT promoter methylation, had an overall survival of just 13.3 months. There are several reasons why conventional therapies for malignant glioblastomas are short-lived and not curative. High-grade brain tumors exhibit a devastating malignant progression, characterized by widespread invasion throughout the brain. The tumor invasion is facilitated by normal brain parenchymal cells, which secrete ligands that can stimulate receptors on invasive glioma cells. Glioblastoma cells produce factors, like growth factors, cytokines and chemokines, which support the growth and the infiltrating character of glioblastoma cells in paracrine and autocrine fashion. High-grade glioblastomas express cellular and molecular markers that are associated with mesenchymal stem cells. It is not known whether glioblastoma cells are derived from transformed stem cells or that activated genes in glioma cells elicit mesenchymal properties of cancer cells. The heterogeneity of glioblastoma multiforme cells contribute mesenchymal stem cells that home in the tumor mass, and together with other cells make up the tumor stroma. Secreted factors from all cells present in the tumor mass are able to diffuse through the peri-tumoral stroma, thereby influencing parenchymal cells that surround the tumor mass and simultaneously with hypoxic conditions are creating a permissive microenvironment for malignant progression. In addition, the immunosuppressive character of MSCs might protect the tumor cells from attack by immune cells.

The most serious reason for resistance of glioblastoma cells is very likely the existence of cancer stem cells – glioma cancer stem cells, which are resistant to chemotherapy and radiotherapy, infiltrate, and proliferate. Glioblastoma multiforme (GBM) has a polyclonal character being composed from clones of dividing tumor cells and a few tumor initiating cells. Conventional therapies like radiotherapy and cytotoxic chemotherapy kill dividing cells, but slowly dividing cancer stem cells remain unaffected. These therapies select for the more aggressive GCSC, leading later to frequent tumor relapse with tumors resistant to further conventional therapy (Fig 3).

What is new in glioblastoma?

Several small molecule inhibitors of poly(ADP-ribose)polymerase-1 (PARP-1), a critical BER protein are yielding promising results clinically, both in combination with TMZ and as single agent chemotherapy in patients whose tumors possess homologous recombination DNA repair defects (Fig 4). Lynparza (olaparib) is a PARP-1 inhibitor indicated for use in patients with BRCA1 mutations with ovarian cancer. 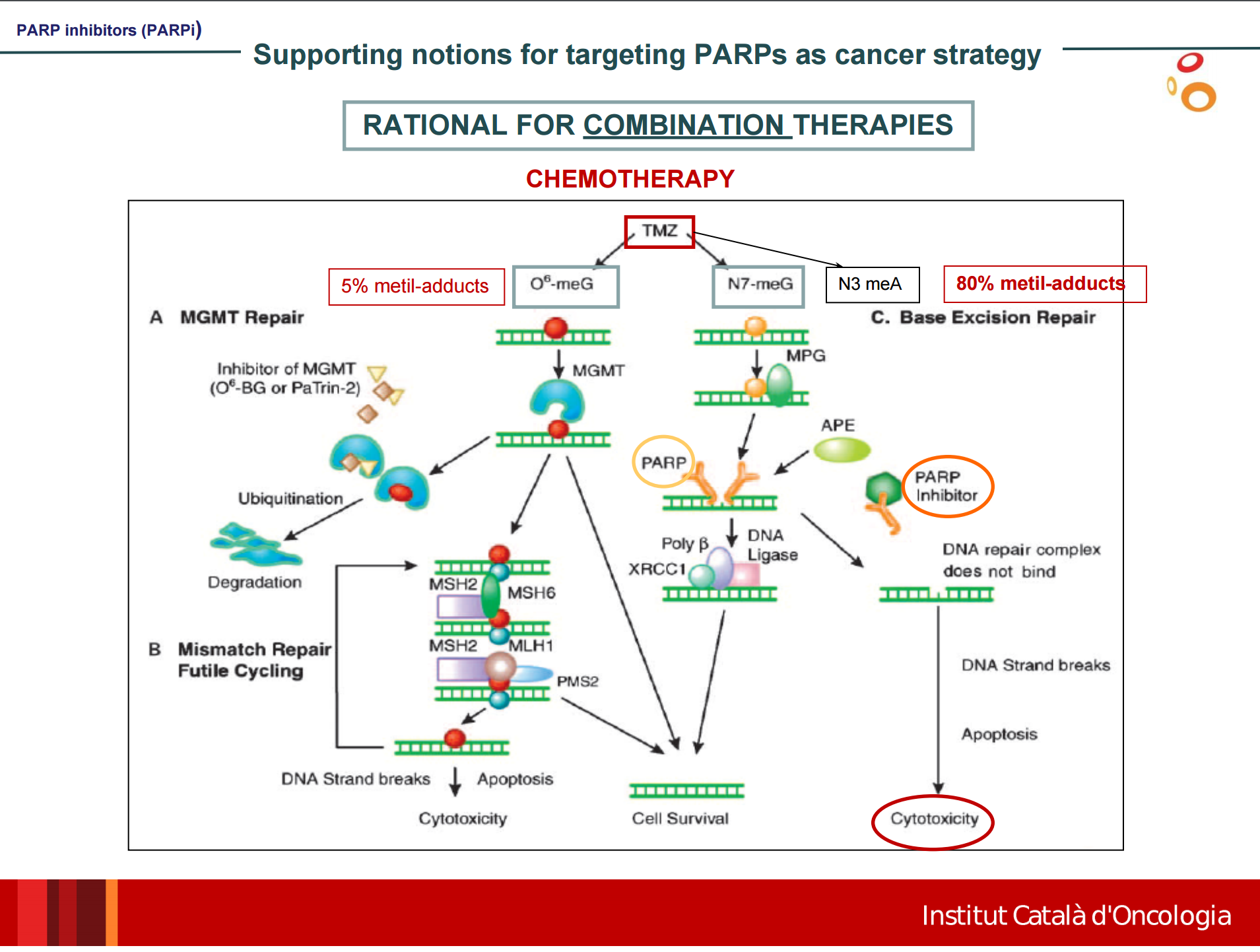 Immune checkpoint inhibitors are also being tested in glioblastoma. A phase III clinical trial comparing nivolumab, which targets the checkpoint protein PD-1, against bevacizumab (anti-VEGF monoclonal antibody) in patients with glioblastoma that has returned after prior treatment is currently enrolling patients. Embedded within this trial is a phase I trial testing nivolumab in combination with ipilimumab (a CTLA4 inhibitor). A trial in patients with recurrent glioblastoma combining temozolomide and olaparib is underway. A combination of an oncolytic virus plus a PD-1 inhibitor (pembrolizumab) is also being studied.